Who wouldn’t love an African Safari? Picturesque surroundings, incredible landscapes and phenomenal animals such as elephants and lions to feast your eyes on – sounds idyllic. NextGen are not the first game developers to use the African Safari theme for a slot game, but in Wild Run, they have created an engaging and lucrative slot game for all levels of player.

The African Safari theme is prominent from the outset with Wild Run, golden sunsets with a variety of animals dominating the games visual composition. The dominant big cats and other majestic creatures roam the reels, including cheetahs, rhinos, elephants, buffalos and lions – the latter is the wild symbol and substitutes for all symbols. In addition, the percussive jungle soundtrack helps to set the African Safari scene of a savannah at sunset.

Wild Run has a classic feel – with a 5 x 3 reel set up with 30 pay lines of action for punters to look to exploit. The animal theme is concurrent through the base game, where a minimum of 3 identical symbols on a pay line will be enough to secure a win, be they leopard, buffalo or any of the other big beasts that call this game their home. As in the jungle, survival is key and there is an established hierarchy so unsurprisingly the bigger animals, generate the bigger pay outs. Rhinos are worth up to 80 for 5 on a line whilst the equivalent spin with an elephant is worth as much as 100 coins.

The range of bets available to punters on Wild Run makes it a very inviting game to play for all levels of online gambler. The minimum bet per spin ranges from £0.30 up to a rather hefty £750, meaning there’s plenty of options for punters – regardless of any budget constraints they may have. Wild Run has all of the stereotypical components of a slot game with generic icons on the reels, such as card suits: clubs, diamonds, hearts and spades – all yielding smaller wins if matched across the screen. When you spot a wild animal, your chances of winning big increase dramatically – match them up and count the coins!

Wild Run is a medium variance slot that offers an average pay out percentage (RTP) of 96% – which is comparable to most of its market competitors. With a coin size that ranges from 0.01 to 25 coins, Wild Run offers plenty of betting opportunities for online gamblers, with all budgets catered for. A potential drawback for Wild Run is its relatively small jackpot of 800 coins (per game) which could act as deterrent for higher stake gamblers – but the large maximum bet limit counteracts that somewhat. The jackpot is achieved as part of the ‘On a Roll’ feature (explained below) coupled with 5 ‘Wilds’ (lion character) which can herald the 800 coin jackpot for players who strike it lucky.

Successful players of Wild Run will be those who utilise the ‘On a Roll’ feature – an innovative bonus game from Next Gen – which is fast becoming their trademark feature. ‘On a Roll’ kicks in after each win – regardless of the win size. When this happens, a re-spin will be awarded, with ‘Wilds’ appearing on reels 1 and 5. Win again at this stage and the sum will be doubled thanks to a 2x multiplier. That’s when ‘On a Roll’ will trigger again, with wilds now added to all reels except reel 3, as this point there will also be a 3x multiplier applied. A win at this point will send you into the free spins feature; conversely a loss will send you down a level on the ‘On a Roll’ feature meaning it can be quite an arduous process – although the rewards can be great.

The simple but highly effective nature of the feature is one of the ultimate selling points for Wild Run and is potentially a very lucrative bonus feature. Triggering free spins, even if the resultant sums to be won aren’t astronomical, is very simple to do as they come into play on every single win – which makes the game very easy to play. The free spins continue until you notch up 4 barren spins in succession whilst any wins that you obtain with the aid of ‘Wilds’ will be automatically accompanied by a 5x multiplier – another handy bonus.

The composition of the Wild Run slot is in-keeping with most classic online slot games and is easy to pick up for all levels of player. The plethora of free spins in particular coupled with the ‘On a Roll’ bonus feature; make it a very attractive slot – regardless of stake placed.

Set in the heart of an African Safari, Wild Run’s graphical representation and catchy soundtrack set the idealistic scene perfectly for slot players dreaming of warmer climes. Thankfully the only hunting taking place during Wild Run is that of money and with plentiful bonus features and free spins, Next Gen have created an engaging online slot.

Whilst Wild Run may not offer the most inviting jackpot for the highest rollers, the varied betting limits do offer something for all players, and Next Gen’s unique ‘On a Roll’ feature allows players to spin at will without taking chunks out of their bank balance. Effective use of the ‘On a Roll’ feature is essential when playing Wild Run and can generate huge pay outs – if utilised well.

With its moderate volatility and competitive RTP, Wild Run is an attractive proposition for all online gamblers. So, are you dreaming of an African Safari? Fancy hunting a few coins? Head over Next Gen online casinos now and see if you can tame the animals and collect yourself a handy jackpot… 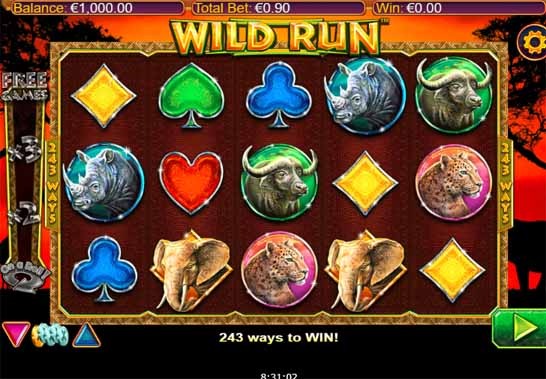 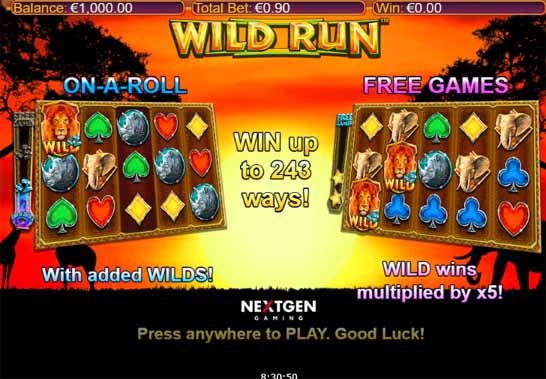