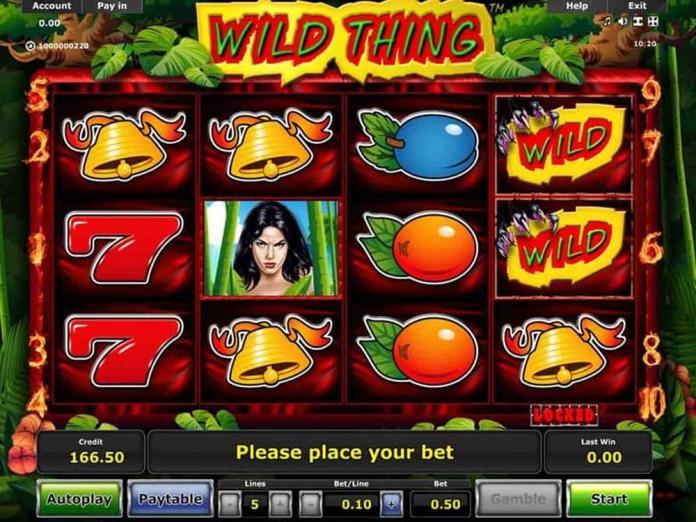 With a jungle theme, Wild Thing is not the most original themed online slot machine game. However, it does attract players who enjoy looking at the attractive Amazon woman named Sheila.

The background of the game is a jungle and the symbols used include stacked fruits. Players will see the small reels filled with classic symbols such as watermelon, oranges, grapes and blueberries. The reason for this is that Wild Thing represents the modern version of the original fruit slot machines. Other symbols in the game include a blue star, a red seven and a winged bell. The blue star is the highest paying symbol in the game. An animal claw graphic is the game’s wild symbol. Shelia is the stunning beauty that represents scatter symbol in the game.

Unlike most modern slot machine games, this one only has four reels and 10 pay lines. Players can get either three or four-of-a-kind wins thanks to the layout of the reels. The reels to the left of the screen include pay lines one through five. The reels to the right of the screen include pay lines six through 10. Payouts are calculated according to pay lines. Pay lines one through five pay starting at the left side. Pay lines six through 10 pay starting at the right side. The RTP for this game is 95.8%. For most players this makes it worth taking a shot at it. Players even have the option of using the game’s auto spin feature. This allows them to select from pre-chosen numbers of time the reels will spin without the player having to do anything. All of these spins must be played with the same size bet, which players can choose before they begin their auto spins.

An interesting bonus feature of Wild Thing is that if the right reel has 3 wilds and a scatter, the fourth reel becomes locked. It stays that way until players have finished their free spins. The way to get free spins on this game is to get either three or four of the Sheila scatter symbol on the reels within a single spin. If there are three of the scatter symbols on the reels players get 10 free spins. If there are four of them players get 20 spins for free. The game’s free spins may keep being retriggered until a player has won as many as 300 free spins.

Though Wild Thing is far from a fast paced or complicated slot machine it appeals to many players who are familiar with the classic fruit slots. It can be played at many online casinos either for free or by using real money.

The Amazonian jungle theme of the game is not new. Many games that came before and since have also been based on the same theme. However, Wild Thing does it in a way that is purely about entertainment. The cartoon style used to draw the graphics makes it a fun game to watch.