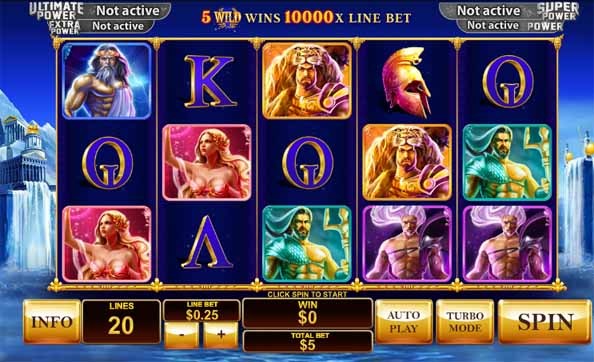 Greek mythology is a common theme of slot machine games and Age of the Gods is no exception. Even its bonus games are based on Ancient Greek Pantheon demi-gods and gods.

The electric blue reels on the game screen are framed in gilded gold. The background seen behind the reels depicts an Ancient Greek town with beautiful waterfalls on both sides of the reels and a sea of water under them.

The game symbols seen on the reels all represent Greek mythology. They include characters such as Mr. Zeus, Poseidon, Athena, Aphrodite, Hades and Hercules. Players will notice that the Ages of the Gods logo, a laurel wreath, acts as the scatter symbol in the game. Hercules represents the game’s wild symbol. No symbol in the game is worth more than the Athena symbol.

Getting at least three of the scatter symbols on the reels within a single spin triggers a bonus. This brings players to a different game screen where they see a grid with 20 bronze coins on it. Underneath each coin is one of the game’s character symbols. Players choose coins until they find three of the same character. This triggers nine free spins of the reels, which will have one of four special characteristics associated with them.

When players get the Poseidon free spins they get as many as five extra wild symbols on the reels. This bonus feature sees lightning coming out of Poseidon’s trident, which is what transforms random symbols into wilds. The Hercules free spins give players a stacked wild

Regardless of which type of free spins a player gets the bonus round ends when players pick the coin that reveals Hades. There is no chance of any free spins being re-triggered during the bonus game.

The Pantheon of Power on Reels is a bonus feature in which players that get five God symbols on the reels at once win a huge cash prize, provided the symbols showed up on an active payline.

Age of the Gods has not one, but four progressive jackpots attached to it. All four jackpots can be randomly triggered anytime during gameplay. When one of these jackpots is triggered players are taken to a new game screen where they see a grid. The grid contains graphics that players have to uncover one at a time. The goal is to uncover three matching jackpot symbols. When this happens players win the particular jackpot.

Age of the Gods Slot Screenshots