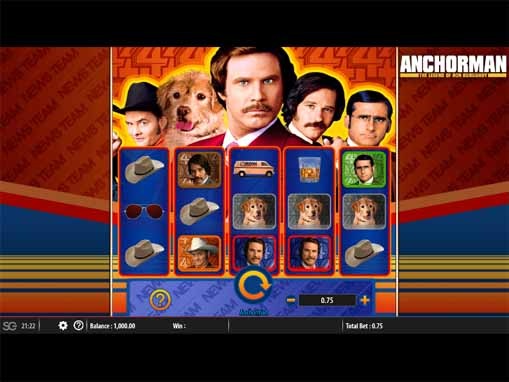 If you’ve ever seen the original Anchorman film, you’ll know that it’s one of the funniest movies to ever be released. Now you can find this humour at your favourite online casino site, thanks to the Anchorman: The Legend of Ron Burgundy online slot, which has been developed by the people over at Bally Tech. You won’t just find humour at this slot though, as you’ll also find great gameplay and the chance to win some huge prizes, so why not find out more by reading through our Anchorman: The Legend of Ron Burgundy online slot review today?

Anchorman: The Legend of Ron Burgundy is a slot with five reels and 25 fixed paylines. The fact that they are fixed means that you’ll have to have all of them active on every spin, but is this really a problem? After all, most experienced online slots players would agree that you should always have the maximum number of paylines active anyway.

While you can’t change the number of paylines, you can alter the amount of money you bet though, and this is simply done by clicking the plus and minus arrows in the bottom right corner of the screen. The least that can be bet per spin is £0.75, which makes this slot unsuitable for those playing at the lowest levels, and the highest bet you can make is £150, which should suit even those big high rollers looking to play this game.

We should also look at the prizes at this game – after all, they’re the reason why most people play online slot machines! The most that can be won on a single payline during the base game is £1,750 and this is won when you manage to get five Ron Burgundy symbols across a payline. All other main characters from the show also offer decent payouts. You will find that the bonus features at this slot can lead to much higher wins though, as you’ll see in the next section of this Anchorman: The Legend of Ron Burgundy online slot review.

There are loads of bonus features at this online slot machine, which should please most online casino fans. The first is simply the wild symbol though, and you’ll easily be able to spot this symbol on the reels. This symbol can substitute for most other symbols on the reels and create some nice winning combinations, so it’s certainly a symbol you’ll want to see spinning into view as often as possible.

There are then three bonuses that can activate during the base game, and the first of these is called Mystery Stacks Reels. When this is activated, each reel will have a number of positions that randomly turn into the same symbol, and this can bring some massive prizes. Then there’s the Ron Reels feature, during which only certain symbols appear on the reels, which increases your chances of winning. Finally, you’ll find the Baxter Wilds Feature, and this happens after any spin, and sees up to 10 different wild symbols placed on reels two to five. As you might imagine, this can lead to some massive winning combinations.

The first of them is called Ron’s Giant Free Games, and this is perhaps the best of them all. You’ll find that the reels suddenly expand to be 19 rows high, and this means that you now have 117 different ways to win. You’ll get six free spins in total and you should find that you get multiple wins on most spins of the reels.

Next up is Whammy! Free Games and this gives you 12 free spins. You’ll find that a ladder with 12 steps appears on the screen. You’ll move up this ladder when you manage to get more than one Whammy! symbol on the reels, and as you go up the ladder you’ll win multipliers. Every Whammy! appearing on the reels will then win a prize worth your stake multiplied by the multiplier.

Then you’ve got Brick’s Weather Wheels. This is a simpler game, whereby you’ll spin the wheel and win prizes. If you manage to make it into one of the inner wheels, you’ll then get to spin them to win even bigger prizes.

Finally, there’s the Sex Panther Pick feature. You’ll see 15 bottles on display, and you’ll need to pick three of them, and each pick will give a cash value. You then need to pick one of the five packets to reveal your multiplier. The prizes and the multiplier are then combined to reveal your overall prize. 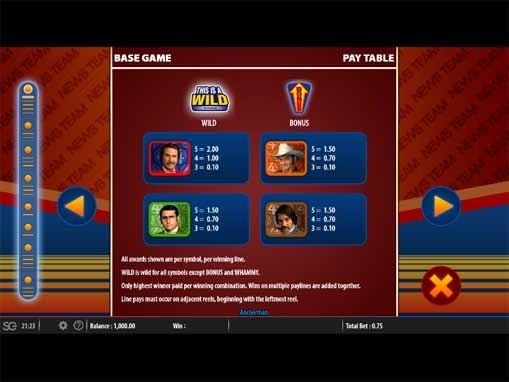