Every Saturday evening, millions of people throughout the country tune in to watch Ant & Dec’s Saturday Night Takeaway, ready to be amused by the two lovable Geordies. You don’t have to wait until Saturday to get your fix of Ant and Dec though, as Microgaming’s new slot is based on the award-winning show, and comes packed with loads of fantastic features – just like the TV show. You’ll be able to find out everything you need to know about this slot, when you read through our Ant & Dec’s Saturday Night Takeaway review below…

As soon as this slot loads, you can see that it features many of the best bits from the show – including, of course, the two presenters themselves. Everything looks incredibly crisp and clean, and the game is really easy to play – but what more would you expect from a slot from Microgaming? The music might not be to your taste though, especially if you play this slot for a while, so many players will find themselves hitting the mute button after a few spins of the reels!

Ant & Dec’s Saturday Night Takeaway is a slot with five reels and 40 different paylines. These paylines are fixed ones, therefore meaning that you have to play all of them every time you spin the reels. You can adjust your bet amount though, with the lowest possible bet being £0.40, and the highest possible bet being £60. This range of betting levels means that Ant & Dec’s Saturday Night Takeaway is a slot that should suit all budgets. Of course, the more you bet, the more you could win though.

The most that can be won when you spin the reels at this slot is £1,050,000, and this is won via one of the bonus features – you’ll find out more about these further down the page. In terms of the base game, the most that can be won per line is 600x your bet per payline, and this is won when you manage to get five logo symbols lined up on an active payline. As you might expect, the symbols featuring Ant and Dec are the other high paying symbols at this slot. It should also be mentioned that this is a slot with medium volatility, meaning that you won’t have to wait ages for a win, but also won’t constantly get only small wins spinning into view.

There are absolutely loads of fantastic bonus features at Ant & Dec’s Saturday Night Takeaway, and the first of them to mention is the wild symbol, which is represented by the game’s logo. This can substitute for all symbols, aside from the scatter symbol, and it comes stacked during the base game, as well as during the free spins. This means that they come into play quite often, and can help you win some huge prizes.

The scatter symbol at this slot is the numbers board, and it is the key to winning this game’s top prize. For starters, you’ll get an instant cash prize whenever you get two or more scatter symbols anywhere on the reels, however you’ll also start the Win the Ads Bonus when you get three or more of them on the reels. Activating this feature will potentially see you awarded one of four different bonuses, and the one you get is randomly determined.

To find out which bonus you might get though, you will need to play the Super Computer Booster. This feature will see you either increase half of the prizes on the board, increase all of them, or increase your number of picks from one to three. You then choose from one (or three, if you got that bonus) of the numbers on the board, and you will then win a cash prize, a multiplier, the jackpot, or one of the bonus games, which are explained in detail below…

The first bonus you could activate is the Best Bits Bonus, which is a pretty simple one – but one that should really please fans of the game. You’ll need to keep selecting clips from the show, which will then play. When the selected clip is finished, you’ll win a cash prize. The feature continues until a red cross appears on the screen.

The second of the possible bonuses is the End of the Show Bonus, which is another simple picking game. You just need to select from options on a board, and you’ll win cash prizes and multipliers when you match two identical symbols. Of all the bonus games, this is probably the least entertaining, but it can still lead to some really big prizes.

There are then two different free spins features – Ant & Dec Free Spins, and Get Me Out of Ear Free Spins. The first of these has various stacked symbols added to the reels, which can lead to some huge prizes, while the second has Rolling Reels and Growing Wilds. Rolling Reels can lead to multiple wins per spin, while Growing Wilds see the stacked wild symbols increasing by an extra symbol each spin.

Ant & Dec’s Saturday Night Takeaway is a fantastic slot, as it manages to be simple to play, but to also offer a huge number of different features. This is because all the bonus features are activated in the same way, so there aren’t loads of different bonus symbols to watch out for on the reels. The jackpot is the main reason why most people play this great slot though, as not all online slots offer players the chance to win over £1,000,000 per spin! 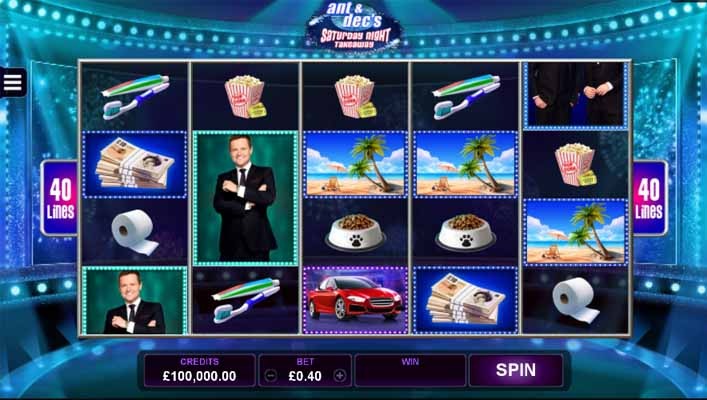 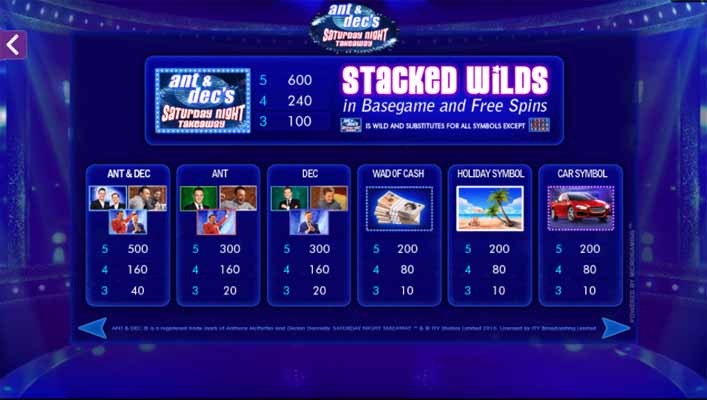