Apollo God of the Sun

Apollo God of the Sun is a stunning new slot with 3D graphics from the gaming software provider Novomatic. The game features two different sets of reels with a total of 100 paylines. The free spins feature offers you a chance to win 20 free spins and up to 100,000 coins. For more details about the Apollo God of The Sun Slot, read our full review below.

Novomatic has done a great job with the graphics and this is certainly one of their most beautiful slots. The game is inspired by Greek mythology and the Olympian deity Apollo in particular, who looks like a fiery reflection of the radiating Sun he reaches for. His eyes will glimmer every time a winning combination lands on the reels. The game is complimented by an epic soundtrack, reminiscent of a Hollywood blockbuster.

You can play Apollo God of the Sun with a minimum bet of 50p up to a maximum bet per spin of £100. The game is available on all devices – desktop, tablet, and mobile. Similar to the Colossal reels in some Williams games, the slot has two different set of reels – a small 4×5 reel and a bigger 12×5 reel.

Higher value symbols include the burning horse and Apollo himself, who pays out 5 times your total stake for 5 of a kind. Apollo God of the Sun Slot has a return to player percentage (RTP) of 95%.

The Wild symbol is a burning sun and it substitutes for all other symbols except the Bonus symbol. If you get 4 consecutive Wild symbols stacked vertically on the main reel set, those will be transferred to the extra reel set turning the entire corresponding reel wild.

There is also a Gamble feature for the real risk-takers. Every time you win, you can try and guess the back of a card by choosing Red or Black to double your win. Keep in mind though, if you guess incorrectly, you will lose the winnings.

The Bonus symbol is the helmet and if you get three or more of them scattered across the reels, you will trigger free spins. The Bonus symbol lands on reels 1, 3 and 5 of both sets of reels, which makes it a bit harder to get to the free spins feature, but the big prize is worth chasing after. If you manage to land 5 helmets, you will be get the biggest payout of 20 free spins and 100, 000 coins. And if that’s not enough, during the free spins feature, any Wild symbol on the regular reel set turns into stacked Wild across both reel sets, multiplying your winnings even more.

Apollo God of the Sun is a game that will interest both the casual players and high rollers. The theme isn’t something we haven’t seen before, but the graphics are beautiful with impressive attention to detail. That definitely puts Apollo God of the Sun by Novomatic in the top Greek/Roman themed slots. The free spins feature is a bit elusive, but once you get to it, the cash starts pouring. 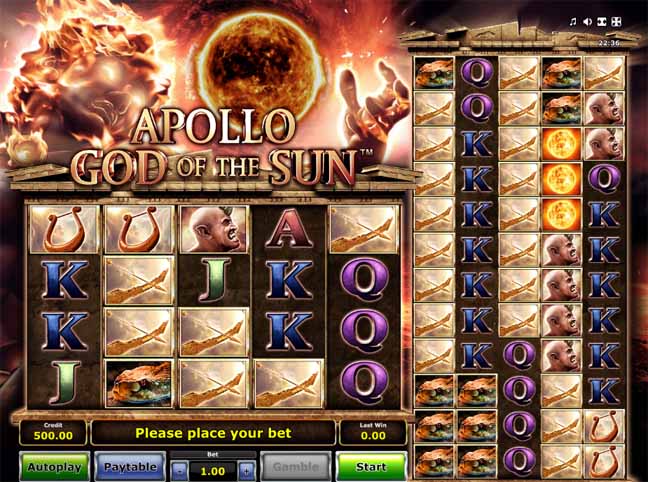 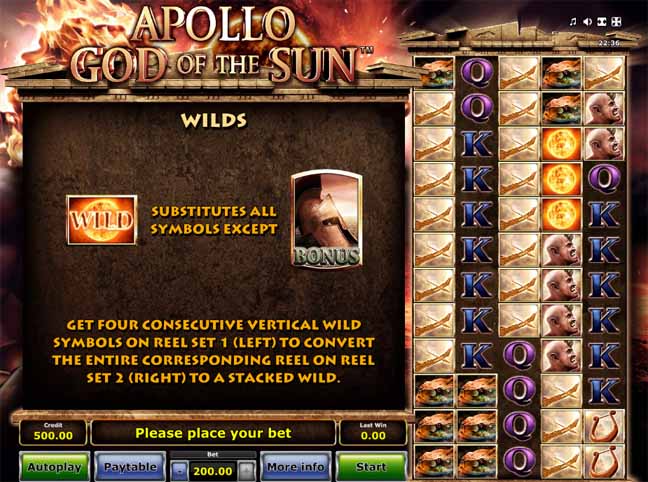