We love it when a slot is released with a completely new theme, and this is certainly the case when it comes to the Battle Royal slot machine from Play ‘N Go. You’ll head back to Tudor times and will find yourself surrounded by Henry VIII and his six wives. Throughout your time playing heads will roll and money will be won, plus the excitement is always high, thanks to the three different bonus features on offer. We think that this is one of the best slots ever released by the people over at Play ‘N Go, so why not check out our comprehensive Battle Royal online slot review below?

Battle Royal is a slot machine with five reels and three rows, so it looks pretty standard. You’ll find that there are only 20 paylines, which will concern some, however please be assured that this slot still manages to provide plenty of fun and excitement. The paylines are fixed, so they’ll all have to be active on every spin. If you’d like to see how the paylines are laid out, you can do so by looking at the game’s paytable (just click the “i” symbol to do this).

The minimum you’ll be able to bet at this online slot machine is £0.20, which should be low enough for nearly all players. The maximum bet is £100 – not the highest we’ve ever seen, but still enough for the majority of people. It’s east to alter the amount of money you bet – just use the plus and minus arrows to move up and down the stakes. Remember that big bets will give you the chance to win more money, as is always the case at online slot machines.

But how much money can you win when you play this online slot from Play ‘N Go? Well, the maximum possible prize is 5,000x your stake, which can be won on every free spin. This means that the jackpot can be absolutely huge! The highest paying symbol on the reels is the queen with the gold dress, however all of the other wives of Henry VIII also have big prizes attached to them. This slot is one with a very high variance, so you could win loads quickly, but you good also lose loads of money in a short period of time too.

The first of the bonus features to mention is the one that leads to the lowest prizes, however it’s still a feature well worth activating. It’s called the Royal Flush feature and it can activate after any spin. It will cause all playing card suit symbols to turn into the same playing card suit, which can lead to multiple winning combinations.

You’ll notice that there’s a coat of arms symbol on reels one and five. When you get this symbol on both reels at the same time, you’ll be asked to choose one of the symbols. This sees you activating either the free spins bonus or the Long Live the King bonus feature.

The Long Live the King bonus feature is a fun one. It sees Henry VIII in a haunted dungeon and he’ll win prizes as you click on different chests. After each spin, a ghost of one of Henry’s wives moves across the screen. If this ghost comes into contact with Henry, the feature will be over. If you manage to find the key, you’ll escape the dungeon and will have a nice multiplier added to the money you’ve already won. If you activate the Long Live the King bonus after your free spins, the multiplier will also be added to everything you’ve won in the free spins round.

The free spins bonus feature is the best bonus on offer at this game. In fact, it is one of the best bonuses we’ve ever seen anywhere, which is really saying something. You’ll first need to choose one of the wives. You’ll then find the reels spinning and you’ll see guillotines above the reels. After every spin, one of the guillotines will drop and if a wife’s head is shown on that reel, that wife will be beheaded. The wife will then turn into a ghost on the reels. Every ghost is a wild symbol, so once you’ve killed a few wives, you should start getting some huge wins.

The bonus feature ends when there’s just one wife left. If this is the wife you chose initially, you’ll win a sizeable cash prize. If not, you’ll need to pick a reel. If the remaining wife is then beheaded on that reel, the Long Live the King bonus will start. If this happens and you find the key, the multiplier you’re given will lead to an absolutely massive prize, as the multiplier is applied to everything you’ve won during the free spins.

Battle Royal is one of the best slots we have ever reviewed, and this is mainly thanks to the amazing free spins bonus. This bonus can lead to some big prizes, plus it is also incredibly innovative and entertaining. Play ‘N Go have really excelled themselves with this casino game, so why not start playing it today at one of our recommended online casinos. 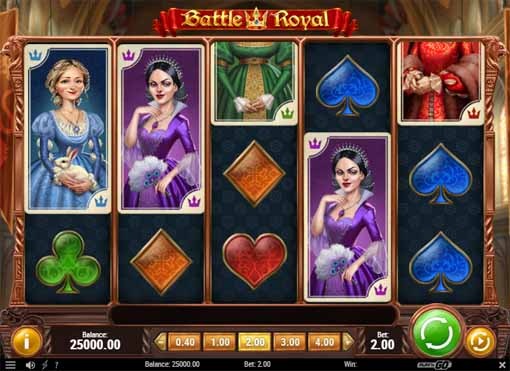 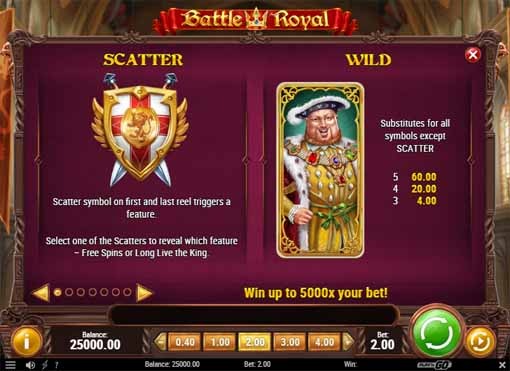