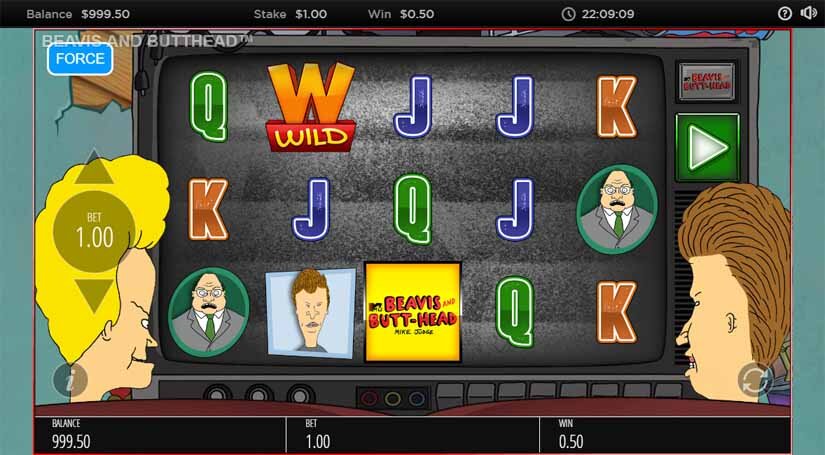 Every Beavis and Butthead fan owes it to themselves to try the video slot machine that pays homage to it. Even players who never watched the show can find reasons to like the game.

Anyone that has ever seen Beavis & Butthead knows the duo watches a lot of TV. Appropriately, the game’s reels are located on a TV screen. All of the graphics used are done in cartoon style. They include Beavis and Butthead as the two main symbols. The boys’ hippy teacher is also one of the symbols. A star is used as the scatter symbol while the logo for the show is used as the game’s bonus symbol.

There are also several modifiers in this game. Each one helps players out in a slightly different way. The names of the modifiers include Die Fly Die, Cornholio Wilds, Colossal Couch Fishing, and So Nacho.

The Die Fly Die modifier created random overlay wilds. Cornholio Wilds take the symbols on a particular reel and makes them stacked wilds. Colossal Couch Fishing takes three reels and turns them into one colossal reel. So Nacho puts nachos on the reels as mystery symbols.

The other four modifiers are Butt Flambe, Some Like It Hot, Cascades, and Change The Channel. Butt Flambe finds Beavis indulging in hot sauce. As he chugs it he repeatedly passes gas. This may trigger a bonus for players.

Some Like It Hot is when Butthead joins Beavis in his hot sauce consumption. The boys then create a flame of fire by burping. This lights up the reels and awards players a winning combination of symbols.

This game is heavy on modifiers. Following any spin of the reels, the Sofa Slugfest may be triggered. When this happens, the symbols on the reels are replaced with new symbols. Those new symbols then form a winning combination for players.

Another random modifier is Change the Channel. When it is activated , the channel on the TV changes and players win a cash prize.

Free spins are also awarded in this game. Players must get the scatter symbol on the reels three times in one spin. At the beginning of this bonus round players see six filmstrips. The one they click on determines what happens next. Players either get access to a bonus feature or they get a cash prize.

One last bonus feature is the gamble. When players use this they can click on a different filmstrip instead. This time, if they get a mystery win, players win cash and resume spinning the reels. If they pick again and get a bonus feature, they can play the feature or gamble again.