Watch out! There are vampires about!

Very much part of popular culture, vampires are depicted in TV shows and movies in a variety of guises ranging from romantic to downright scary! BetSoft have seized the opportunity to cash in on the perceived popularity of the blood-sucking creatures, and their innovative slot game hopefully won’t give players too many scares with its many features and pay out options.

Unsurprisingly, the theme presented from the onset is dark and dour – befitting of a vampire’s natural habitat. With a daunting room as the backdrop, the black reels and gothic fonts on the reels themselves encapsulate the mood perfectly. The haunting music and blood splattering graphical effects do a fantastic job of engaging the player – something BetSoft are notoriously adept at.

Unusually, the Blood Eternal video slot uses an expanded set of reels – 6 x 3 – with punters looking to make matches across six reels and 30 paylines of action. In another innovative move, gamblers are able to make their winning combinations in both directions: both left to right and right to left – which adds an interesting dimension for players. The rare anomaly being – in the rare case that you get two different three-of-a-kind wins on the same payline, only the higher winning one will be awarded to the player. Although it sounds a little confusing, the addition of the extra reel, coupled with the opportunity to play both ways across the reels makes for a fascinating game – for all standards of player. BetSoft have become synonymous with interesting game play and Blood Eternal is no different.

The minimum bet per spin ranges from £0.60 up to a rather inviting £50 and as mentioned, Blood Eternal has 6 reels and 30 paylines – meaning there’s plenty of ways and means to win big. Where the slot works nicely is the combination of generic icons on the reels, all of which can earn you smaller prizes – think of the typical card game ranks, with jacks, queens, kings and the like earning rewards. The stakes rise when players encounter crosses, holy water, gargoyles, vials of blood, and the vampires themselves, both in their human and bat forms – which invariably yield bigger wins for players.

Blood Eternal is a high variance slot that offers an average payout percentage (RTP) of 95.03% – which is a little low in direct comparison to some of its market competitors.With a coin size that ranges from 0.02 to 1 coin, and a max bet of £150, Blood Eternal has something to offer everyone and there is great potential for high rollers aiming for a massive win. The maximum win on a single payline is 500,000 coins if you manage to land on 6 double bat symbols (bonus feature), which can go up to 965,620 coins in a single game.

The composition of the game, whilst initially a little different – is easy to pick up for all levels of player and the plethora of free spins and bonus features make it a very attractive slot – regardless of the stake placed.

As mentioned, having 6 reels coupled with being able to play the game both ways (right to left and left to right) can be a little consuming initially but experienced punters will come to terms with it quickly.Free spins are triggered when vampires, who only appear on reels two and five, and humans, who only show on reels three and four land next to each other – meaning a human is caught – for which, eight free spins are awarded. As a consequence, the triggering pair will become wild symbols and freeze in place for this round and they’ll also turn up to four adjacent symbols wild, on each spin. This is a sequence that can be re-triggered meaning more spins can fire into action by landing another vampire/human pair during this phase of the game. Watch out for the blood splattering graphics – as you watch the coins roll in.

On the interface there are ‘BAT’ and ‘Double BAT’ symbols which can be effective tools when looking to increase your winnings. As many as 12 BAT symbols can be hit on a single line to obtain the jackpot – a win which would yield a rather handsome win of 50,000 coins.

In addition, Blood Eternal does have a 50/50 chance ‘gamble’ feature. At the end of a successful spin, you can choose to risk all or half of your earnings on the flip of a coin. Guess correctly, and you’ll double your stake; pick the wrong side of the coin, and you’ll lose whatever you’ve gambled. As usual, this is a completely optional feature – so the decision is yours.

The basic premise of vampires is not a new one and whilst blood-sucking, extended canine-teeth showing characters may not be for everyone, Blood Eternal is a thematic and relevant slot game that has a lot to offer. The cutting edge composition of the game, with its extended reels, forward-thinking game play and engaging graphical representation are a credit to BetSoft. Despite its relatively high volatility and low RTP, the game is an attractive proposition for all player levels with lucrative bonus features and appropriate minimum and maximum betting stakes.

Can you suck the blood out of the vampire and win yourself a handy jackpot? Why not spin the reels of Blood Eternal now at BetSoft online casinos…? 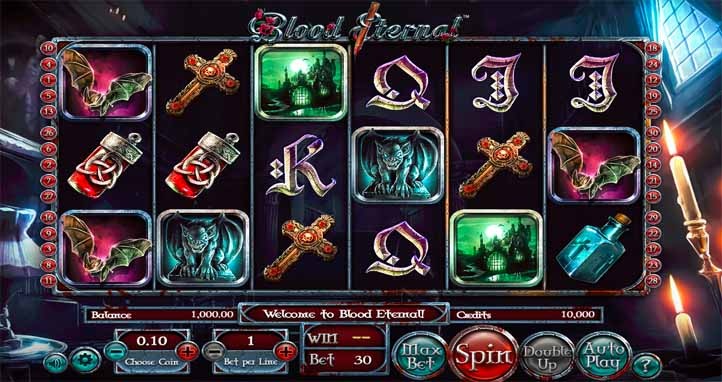 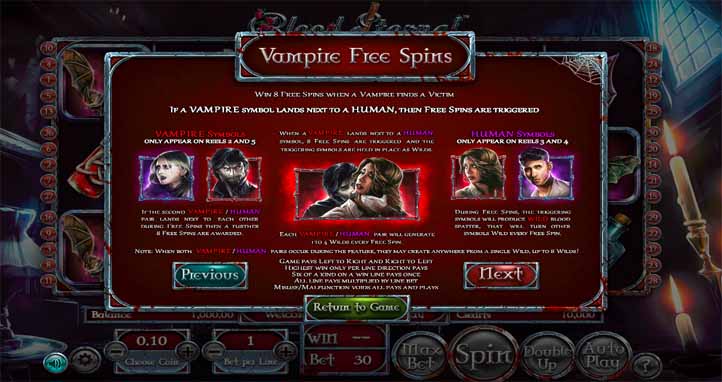