Dirty Dancing is an online slot from Playtech, based on the famous 80s movie of the same name. It has loads of fantastic features – including two progressive jackpots – as well as one of the best soundtracks around, and should be the perfect slot for those who are fans of Patrick Swayze, Jennifer Grey, and their moves on the dancefloor. But will you have the time of your life when you play this slot? Keep on reading to find out…

Dirty Dancing isn’t a basic slot, but it also isn’t an incredibly complex one either – making it perfect for newer players looking to learn how to play, while also having loads of fun in the process. As with the majority of online slots, Dirty Dancing has five reels, and spread across these are 40 different paylines. These are fixed paylines, therefore meaning that you have to play all of them on every spin. You can adjust how much you bet per payline before you spin, with the minimum being £0.01, and the maximum being £10. This means that the maximum overall bet is a massive £400 per spin.

There’s also no way of reviewing this slot without mentioning the music, as you’ll hear many of the famous songs from the movie playing while you spin the reels. Don’t worry if you aren’t a fan of the soundtrack though, as it’s really easy to mute the sound and still enjoy the game. Also, if you want to play as many hands as possible, you’ll find an Autoplay feature at this slot, as well as a Turbo Play mode.

Bonus features play a massive role at many slots, and most players love the thrill of activating one of them. This is not just because they are usually great fun, but also because they can often lead to some absolutely massive prizes! Luckily for those planning on playing Dirty Dancing, there are some really great features at the slot, and they start with the wild symbol, which is represented by Johnny himself. This symbol can replace all other symbols on the reels (aside from the scatter) to help create winning combinations. There is no multiplier attached to this wild symbol though, which some might find slightly disappointing. There is also a scatter symbol at this slot, and it is the Dirty Dancing logo. Scatter symbols don’t have to be lined up on a payline to award a win – instead, getting three or more scatters anywhere on the reels will lead to an instant cash prize.

There are then three bonuses to mention, and they are all activated randomly on any spin. The first of these is called Mambo Free Games, and when this is activated you’ll need to spin a wheel. You can win a free spin, multipliers and Dancing Wilds when you spin, and you can spin the wheel multiple times. Each time you land on a space, you’ll get your prize and the space will become blank. Land on a blank space twice and the wheel spinning will be over, at which point the free spins will begin.

The next random feature is called Whirling Wilds, and this is a pretty simple one to understand. It will see the two main stars of the film dancing across the reels, and as they do they’ll place up to six wild symbols. As you can imagine, this could lead to some really large prizes!

The most important bonus is the Dirty Dancing Bonus though, as this is the key to the progressive jackpots. You’ll need to pick from different options and try to reveal three matching symbols. There are six stages to the game, and if you manage to reach the sixth stage, you’ll have a chance to win one of the two progressive jackpots.

Dirty Dancing is a game that should really appeal to fans of the famous 1980s movie, as well as those who want the chance to win some absolutely huge prizes. The RTP of 94.49% isn’t the highest around, but it also certainly isn’t the lowest, and the bonus features are loads of fun to play, and tend to activate quite frequently. 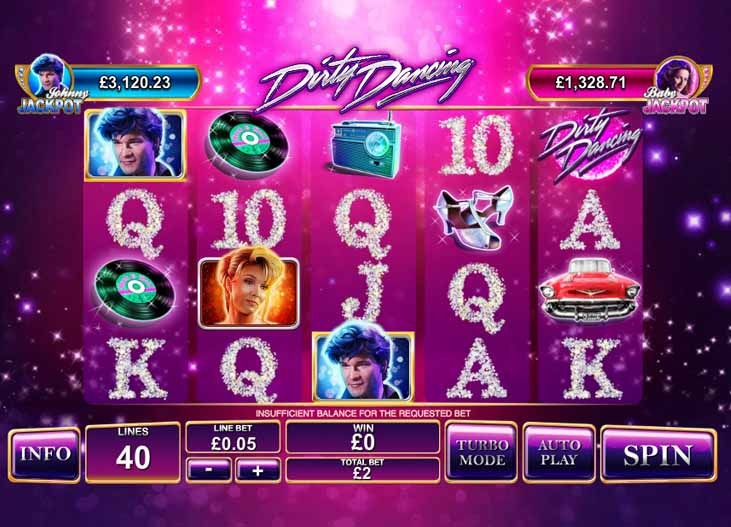 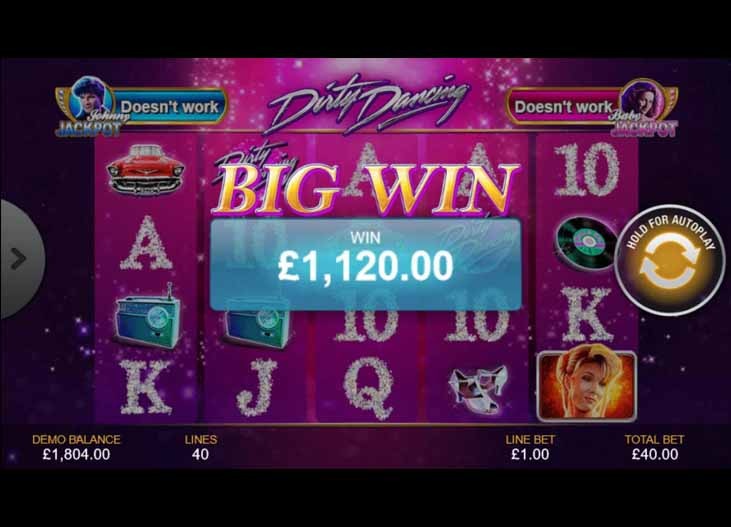 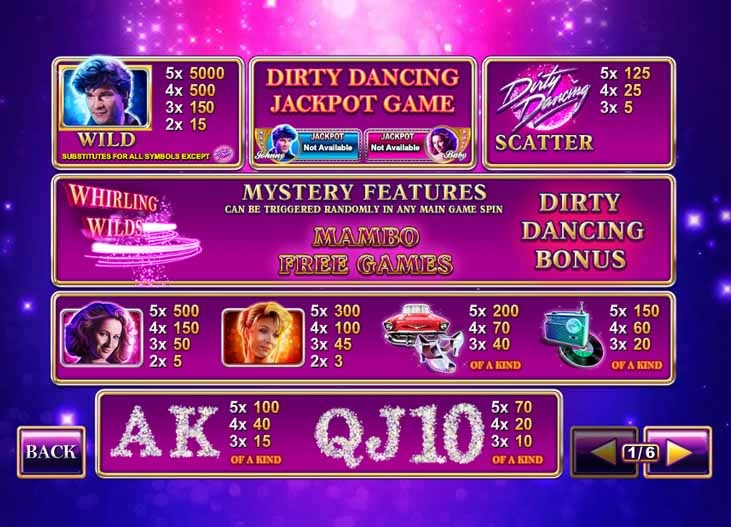