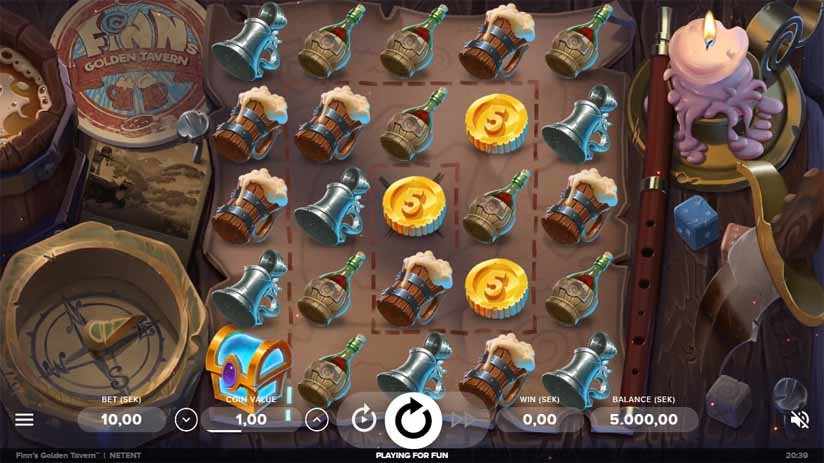 Those who remember the Finn and the Swirly Spin slot machine will be interested to know that Finn’s new game centers on a Golden Tavern. The game is more distinct than other slots and this is a large part of its appeal.

The background seen behind the reels is the wooden floor of a bar. It contains barrels, a burning wax candle, and a compass. A brown board holds the reels, which are filled with symbols one would associate with a tavern. Most of the symbols on the reels are bottles and glasses filled with alcoholic drinks. The others are represented by gold coins.A star serves as the wild, but it only appears when a winning combination of symbols have been formed.

Finn’s Golden Tavern features two modifiers; The First, and the Random Coin Feature. Players won’t see The First on any spin where a winning combination of symbols is formed. It can only randomly appear in the event the reels are spun and a winning combination of symbols is not achieved. When it appears it takes one golden coin symbol and moves it over to where two other golden coins are on the reels, to create a combination of three that results in a win for players. Afterwards, the Random Coin Feature can be activated. It looks for a golden coin in the middle of the reels and adds up to two more coins so players get an additional win.

In the first position on the reels is the chest symbol that can get players free spins. Every time players get a winning combination of symbols the chest symbol moves one space. When it reaches the middle of the reels players get five spins for free. Since wins create stars, when players have accumulated five of them they get a multiplier added to the bonus.

Players will notice that when the free spins round is activated, the game is suddenly set after dark instead of during the day. Not only that, but the compass seen next to the years transforms into the game’s multiplier meter.