Fortunes of the Amazons

Fortunes of the Amazons is a slot from NextGen Gaming, based on the theme of the famous mythical female warriors of the area, who are known for their strength and powers of seduction. It’s a fantastic looking slot with excitement on nearly every spin, and also comes with some rather impressive prizes – such as the jackpot, which leads to a huge prize if you’re lucky enough to win it!

The 50 paylines at this NextGen Gaming slot are spread over five reels, and mean that you should have plenty of chances to spin in a win every time you play. This is a slot targeted towards those with deeper pockets though, as the minimum bet amount is quite large and will therefore prevent some lower stakes players from playing.

When it comes to the symbols on the reels, the highest paying is the wild symbol, plus the game’s logo also provides a big prize when it spins in on the reels. The three different Amazonian warriors are also high paying symbols. The big money can be won when playing the bonus games though, and these are described in detail below…

There are three different bonus features at this slot, as well as a wild symbol. This wild symbol is pretty easy to spot, and can substitute for most other symbols on the reels to create winning combinations. There aren’t any special features attached to it though.

The first of the bonuses is the Amazons’ Fire feature, and this is activated randomly after any spin of the reels. It leads to you being awarded with one free spin, and during this, four wild symbols will appear randomly on the reels. This feature guarantees a win, although this guaranteed win is only 0.5x your total bet.

Next up is the Free Spins feature, and this starts when you get three of the Free Spins symbols anywhere on reels two, three and four. Each free spin will see an extra wild added to the reels, and this wild will stay locked in place for the rest of the free spins. These free spins also take place on a different set of reels, and these reels contain no extra wild symbols and they also don’t contain any Free Spins or Bonus symbols. All symbols on the reels are worth the same as they are in the base game though.

Finally, there’s the Luna Bonus Wheel feature, which is activated by getting three Bonus Wheel symbols spread across reels one, three and five. Each spin sees two parts of the wheel spinning around, and these will tell you your prize and the multiplier you receive. It is possible to win up to 5,000 coins when playing this bonus game!

Fortunes of the Amazons is a slot with an epic feel to it, thanks to the theme and the soundtrack. It looks absolutely great and the prizes are pretty large, but it’s the bonus features that are the most impressive aspect of this slot from NextGen Gaming! 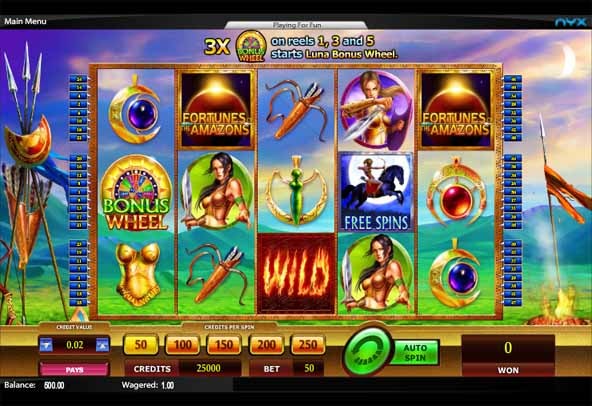 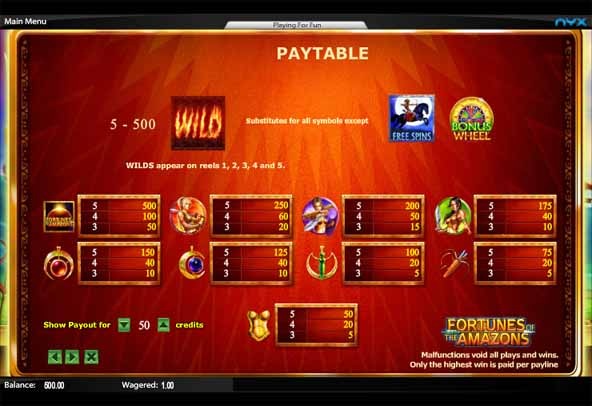