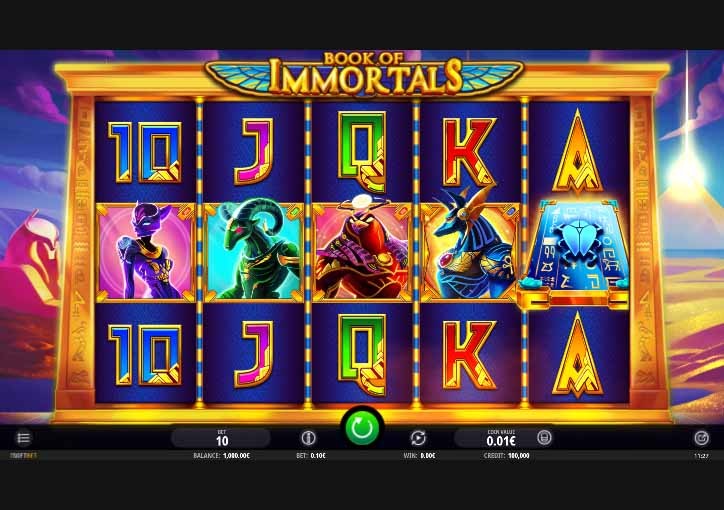 The Egyptian temple themed Book of Immortals is not the most original idea for a slot machine. Its appeal for players lies in its brightly color symbols and bold characters. While spinning the reels, players will notice the game’s background is a typical Egyptian landscape. All of the game’s graphics are reminiscent of classic comic books.

The characters of Egyptian mythology act as the game’s main symbols. These include many Gods and Goddesses, specifically God of the Dead Anubis. A hieroglyphics colorful blue book is simultaneously the scatter and wild symbol. The symbols in this game are more detailed than in most other video slots.

When players get at least three blue book scatter symbols on the reels at once, they trigger free spins. Players then get 10 spins for free, which cannot be retriggered. When the reels are spinning one symbol is randomly changed to an expanding scatter symbol. It remains in place until a winning combination is achieved. Then another symbol on the reels is randomly changed again. With 10 pay lines in the game, enough expanding scatters on the reels multipliers a player’s winnings by 10.

Another bonus feature in Book of Immortals is the Scarab Swap. This a randomly triggered feature of the game. When it happens, Scarab Beetles descend on the reels. They then switch symbols around on the reels. The beetles will switch as many as 10 of them every time this happens. This often leads to winning combinations players may not have gotten otherwise.

The game’s features explain its title. When a God symbol is changed to something special, the symbol is then immortal. This is how they manage to remain expanded scatters for the duration of free spins.

The appeal of random bonuses is all many players need to try a particular slot machine. For that reason, Book of Immortals is a game players are anxious to try. Its lack of progressive jackpots is one glaring fault of the game. However, the potential to win from free spins may make up for that.

The other reason this game appeals to players is that it is easy to learn and understand. It has just enough bonus features to keep players interested without overwhelming them. 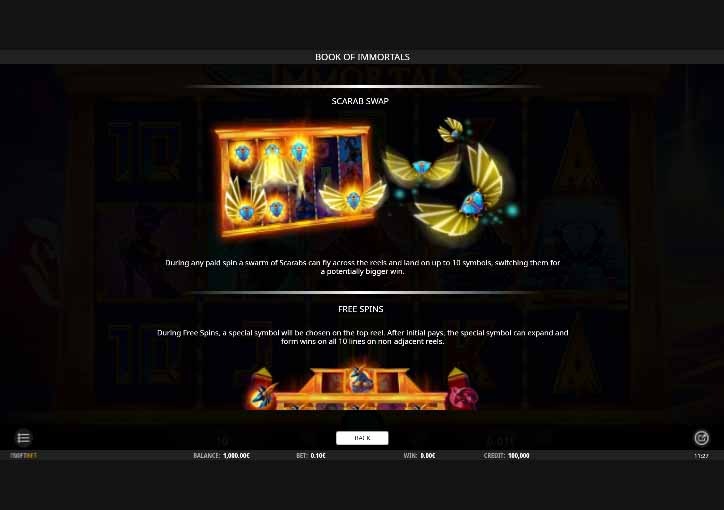 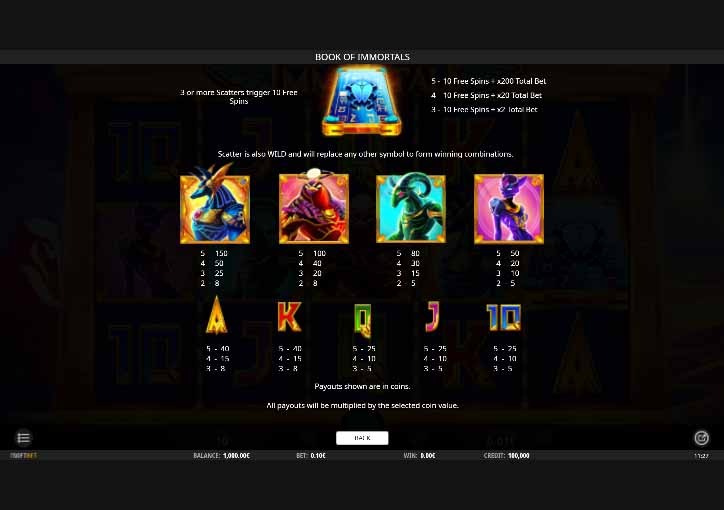 From a visual standpoint, the game conveys a feeling of power and excitement. It does this through the symbols and vibrant colors used to lure players’ eyes to the game screen.

Lastly, Book of Immortals can be played on a desktop computer or a mobile device. Either way, players will experience the same audio and video quality. For those who want to play whenever they can, this freedom to take the game with them makes it easily accessible. Players have many reasons why they want to indulge in this game. Those reasons are compelling to them.