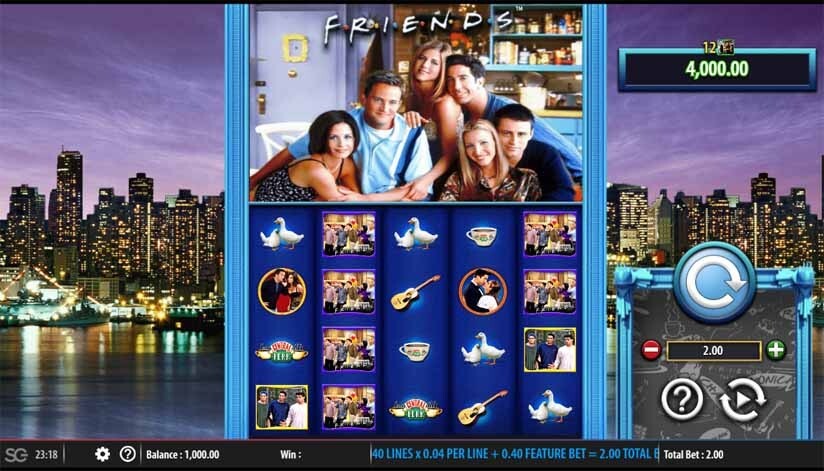 There are few people who haven’t seen at least one episode of Friends. This iconic TV show now has its own self-titled slot machine game. For fans of the show, it allows them to relive a piece of it. For everyone else, it provides an introduction to one of the TV shows that defined the 1990s.

The background players see behind the reels is the NYC skyline on a calm, clear night. In the middle of the screen lies a defined game board. Above the reels is a shot of all six Friends.

The reels are filled with symbols fans of the show will recognize. They include coffee cups fro Central Perk, the Central Perk logo, Phoebe’s guitar, and several scenes taken from the TV show.

In this slot, free spins are triggered by getting three stacks of the Wheel Bonus symbol on the second, third and fourth reels at once. Players are then taken to a new screen. To the left of the bonus wheel, players will see the Friends peaking into Monica’s apartment through the cracked open front door. They watch players spin the wheel. The wheel awards prizes or the chance to play another bonus feature.

One of those features is the Thanksgiving Bonus. It gives players 10 spins for free with a triple multiplier applied to any winnings. However, free spins cannot be re-triggered. Certain other bonus features are also not available.

Another of those features is the bamboozled bonus. Players are taken to a screen with 20 cards on it. They then choose as many cards as possible until they choose the card that offers a jackpot or says the words “Gimme Award.” The other cards have sayings such as “Angel Pass,” “Hungry Monkey,” “Paradise Pound,” and “Golden Mud Hut.” To win a jackpot in this game, players have to get the jackpot wild. It has to appear on the second, third and fourth reels simultaneously.

The party bonus gives players 11 free spins. The only difference is, in this bonus, players get walking wilds. These morph into expanding wilds to increase players’ winnings. As walking wilds. These symbols start at one side of the reels and gradually move over to the other.