It was inevitable that eventually there would be a slot game released around the ever popular smash hit series. Even if you didn’t tune in to watch the series, you’ll have no doubt heard of it, and also the hype around it. If you’ve not heard of Game of Thrones before, then where have you been? It’s the TV series that has taken over the planet, featuring a mix of violence, saucy scenes and fantastical characters, and now it’s been transferred to the world of online casinos, thanks to the wizards over at Microgaming. If you’ve seen the TV show before, you’ll really enjoy all of the references found within the game, but don’t worry if you’ve never seen it – you’ll still like the big prizes and great features that this game offers to all players.

The Game of Thrones slot game from Microgaming continues this in fine style. Based on the best-selling book series “A Song of Ice and Fire,” by George R.R. Martin, Game of Thrones follows kings and queens, knights and renegades, liars and noblemen as they vie for power and a chance to sit on the Iron Throne of Westeros. The series made its debut on HBO in 2011, and will kick off its fourth season in April.

There’s one important thing to mention about this slot before looking at its features – there are actually two different versions of Game of Thrones you can play. One of them features 243 different ways to win, while the other has 15 paylines. Both are equally as exciting, so the choice is really a personal one. All you need to do is select which version you want to play before the game starts, and you’ll then be spinning the reels in no time at all.

When it comes to the symbols on the reels, some might be disappointed to find that none of the characters make an appearance. Instead, the symbols are made up of different sigils from the main houses in the show, namely Stark, Baratheon, Targaryen and Lannister. The main characters do come alive during the cut scenes though, which replay some of the most memorable scenes from the series. It does seem slightly lazy that Microgaming haven’t made all of the symbols unique ones though, instead choosing to use 10-A symbols on the reels.

The slot’s music also can’t be ignored, as it blasts out over the game throughout your time playing. It’s the official music from the TV series, and you’ll be humming it for days after you finish spinning the reels. If it gets repetitive though, there’s always the option of hitting the mute button!

But what about the most important thing at any slot, the money? Well, the first thing to say is that the 15 payline version is more affordable than the 243 ways version, meaning that it’s better for lower stakes players. In terms of the amount that can be won, the most that can be won on a single payline is larger in the 15 payline version, however wins come much more regularly when playing the 243 ways.

Bonuses are really important and are often the main reason why people choose to play online slots. Luckily, Game of Thrones offers plenty of features to keep players happy. What’s more, these features can also lead to some absolutely huge prizes, which is the main reason for playing online slots, isn’t it?

The first of the bonus features to mention is the Game of Thrones logo, and it’s incredibly important. This is because it is this slot’s wild symbol, therefore meaning that it can replace most other symbols on the reels and create some nice winning combinations. It’s not any ordinary wild symbol though, as it doesn’t just take up a single position on the reels – instead, it comes stacked, meaning that it’s possible to get a whole reel full of wild symbols, if you’re lucky enough.

The main feature of the game revolves around the throne symbol though. Not only is this the scatter symbol, meaning that you’ll get a cash prize when three or more appear anywhere on the reels, but getting three or more will also lead to free spins. You’ll be able to ally yourself with one of the houses before the free spins start though, which will lead to different combinations of free spins and multipliers. These combinations are:

Which you choose really depends on your personal preference, however Lannister and Stark generally provide the best balance of free spins and multipliers. It should also be mentioned that free spins can be retriggered while the feature is active, which can lead to even bigger cash prizes.

While they are usually a waste of time, as they lead to more losses than wins, the Gamble feature at Game of Thrones is also a fantastic one. This is because it’s not a simple turn of the card, but instead an adventure through Westeros, which continues after each correct guess. Your win will also be doubled whenever you guess correctly, and you can stop playing at any time. It’s definitely worth trying this game out when you get a smaller win, however it’s not worth risking larger prizes by playing it.

When Microgaming and Game of Thrones came together, there was only ever going to be one result: the creation of one of the greatest online slots to ever hit online casinos. All of the excitement of the series has been perfectly encapsulated by Microgaming, but more important than this is the fact that they’ve given players the chance to win some seriously large amounts of money. So, if you only play one online slot this year, you should make it Game of Thrones. 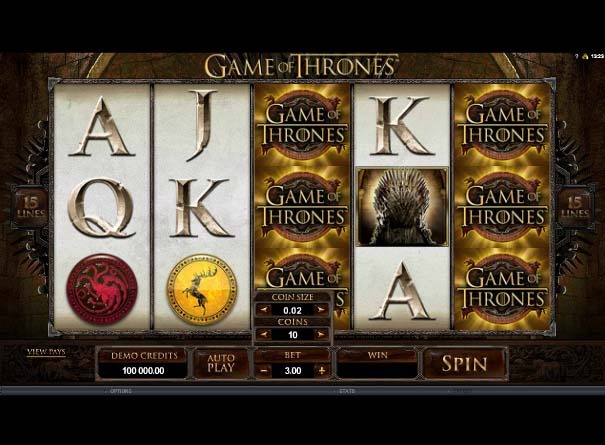 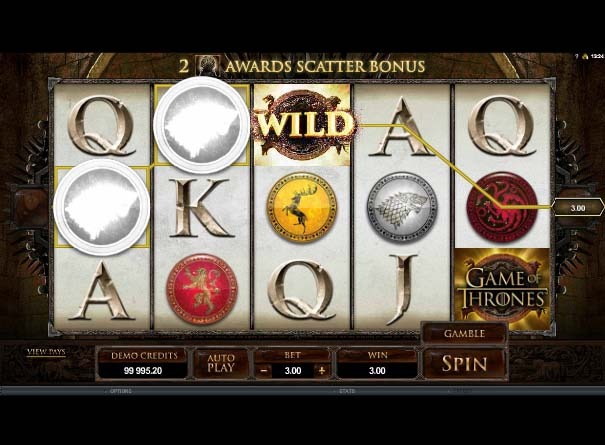