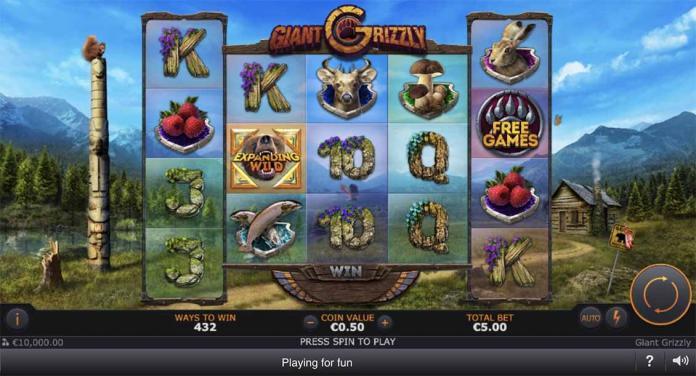 Giant Grizzly is an online slot machine game that takes place in the USA’s Northern Mountains. Though its theme is not completely original, it is not overused either. The game captures the quiet feel of any mountain range.

When players start the game they will hear the sound effects of the drums and pipes often used in Indian music. The scene behind the reels depicts a sprawling green valley complete with totems.

The reels are transparent so as not to take away from the background effects. The game lacks fixed pay lines but boasts 432 different ways to win. In the middle three reels, an equal number of windows are randomly placed. Each window has its own cash value that players may win.

Symbols on the reels include raspberries, moose, mushroom, rabbit, and salmon. There is an action wild symbol represented by a blue bear, while a bear claw is the scatter symbol in the game.

The blue grizzly bear may become an expanding wild at times. In order to do so, it must be placed in a tile highlighted with one of the windows. When this happens, players win a cash prize.

At anytime during the free spin bonus, the free spins may be re-triggered. Cascading tiles are apparent on the reels when this happens. This means that for each free spin, players may win multiple times.

The grizzly bear wilds are removed from the reels and replaced by Rampage Wild. This type becomes an expanding wild if they end up on the highlighted tiles. Players are then awarded the amount of money each tile is worth. This frequently happens during the free spin bonus round.

Players that enjoy Giant Grizzly will often enjoy similar titles as well. These include Untamed Wolf Pack, Wild North, and Buffalo Magic, which have similar themes.

The simplicity if Giant Grizzly, combined with realistic graphics and soothing background music, can be a great escape for players who aren’t seeking a high energy slot machine.

Though the game lacks multiple bonus features, the free spins are often profitable enough that players don’t mind taking the risk on it. Since the game isn’t difficult to learn and understand, it is suitable for those who are just being introduced to slot machines. They can learn their way around a slot and still have fun in the process.