Make sure you’re ready to do battle in Ancient Rome with Playtech’s latest slot instalment: Gladiator Road to Rome. Based on the 2000 Oscar-winning film directed by Ridley Scott and featuring Russell Crowe, this is actually a sequel to the first Gladiator slot game that was released 10 years ago. Playtech have basically kept everything the same visually, but they’ve decided to add a few exciting features that differentiates it from its predecessor, and it’s definitely going to be a hit among fans of the series. With a progressive jackpot to chase, you’re sure to be paid more than the Romans were given to fight back in the day. So be brave, read our detailed review, and find out if this is a battle worth getting involved in!

Even though this is more or less a remake of the original game produced in 2008, there’s actually not that much difference graphically compared with more up-to-date slots released. A visually impressive colosseum forms the backdrop to the reels and flags can be seen sailing in the wind. Fans of the Gladiator films will be very familiar with the surroundings, and symbols include 4 characters from the film – Lucilla (Connie Nielson), Commodus (Joaquin Phoenix), Tigris of Gaul (Sven-Ole Thorsen), and Proximo (Oliver Reed). There’s also an epic soundtrack that plays in the background as you spin the reels.

Gladiator Road to Rome consists of 5 reels and 25 fixed paylines and this structure seems to be the norm for most software developers these days. Why implement a feature where you can reduce the paylines when gamers realise it’s only going to damage their chances of winning anyway? We’ve found that 25 paylines is a perfect amount if you want to concentrate on the game without getting caught up with many different ways of winning.

Players will be able to play Gladiator Road to Rome from as little as 25p or as much as £125 per spin which means it may not cater for all. Low-stake gamers will be pleased with the minimum on offer but those who prefer to bet stupid amounts may be a little disappointed with the maximum bet available. If you want to make your gaming a little easier try using the Auto Play and Turbo Mode features that are on show.

But, is there an opportunity to win a life changing amount of money on Gladiator Road to Rome? Well with any slot that offers a progressive jackpot, there’s always a possibility to earn a massive amount of money and we’ll discuss how in the bonus section. However, in terms of prizes that can be won in the base game, you need to be looking out for the gladiator symbol as landing 5 of these on a payline will earn you 40 times your total bet. Try landing 5 of the Commodus symbols too as this will win you 20 times your original bet.

But what about the bonus features on offer? Well, we have mentioned the gladiator symbol already and this can land stacked which means it will turn into a wild symbol. Slot fans will already be familiar with the fact that this substitutes for all other symbols except the scatter and bonus symbols. The scatter is something that you should be looking out for and this takes form of the shield and weapons symbol. Finding 3, 4 or 5 of these on the reels will trigger the Colosseum Free Games feature and you will earn 5, 8 or 12 free spins depending on how many scatters you originally found.

Once the Colosseum Free Games feature starts, you will be given an opportunity to pick 3 shields from a total of 12 to reveal modifiers that will apply to your free spins. There are 6 of these in total and include 3 extra free spins, a multiplier of up to 3x, an increase of a random symbol by 5x, a random symbol which becomes a wild, a symbol which expands on the reels, and the opportunity to turn the whole reel wild. The free spins will then take place with whatever you have won in place which will increase your prize fund massively.

The last feature worth mentioning (and we’ve saved the best till last) is the Gladiator Bonus which is triggered when you find the helmet bonus symbols in reels 2, 3 and 4. You will then be given 9 helmets which are gold, silver or bronze. Each one will contain acash prize and if you manage to find 9 gold helmets, you will win the progressive jackpot!

Even though Gladiator Road to Rome is similar to its predecessor Gladiator, there are plenty of bonus features which set it apart and allows for huge cash prizes. The Colosseum Free Games feature is still here but this time you can win up to 1000 times your original stake and maybe even 9000 x if you apply the 9x multiplier which is quite incredible. If you enjoyed the 2000 movie release then you’ll definitely have fun entering this arena and joining the battle! 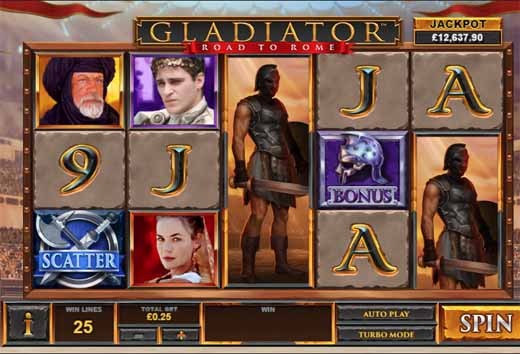 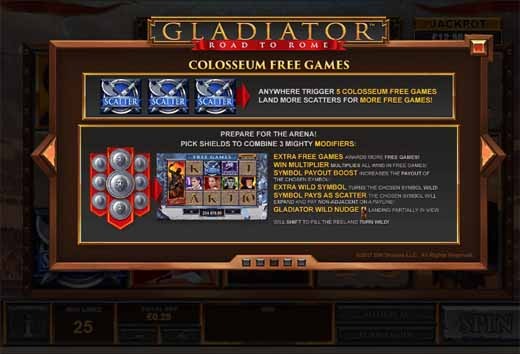