The huge outdoors is always full of adventure and fun so it’s quite fitting that Rabcat have managed to create a new slot game based on these characteristics called Gnome Wood. Here you’ll be taken into a beautiful, fantasy world full of magical creatures where you’ll be able to win unbelievable prizes. Happy gnomes will guide you through your journey as you wander deep into the mythical forest and explore the wonderful bonus features on offer. It’s a far cry from other releases by Rabcat who rarely provide us with new games but we’re entirely grateful. So why don’t you take a read of our detailed review and take a step into the mysterious world of Gnome Wood!

Upon loading the game for the first time, you’ll notice that the graphics are impressive, and in many respects similar to those of Gonzo’s Quest. Set against a forest backdrop there’s tons of greenery and everything else you would expect to see in the middle of the woods, such as mushrooms, bright blue skies and – perhaps a little more surprising – a sun worship stone where gnomes visit for power and strength. It truly is a graphically magical game and symbols that could win you big money include a gnome, a cauldron, a harnessed rat, a book, and colourful ornaments.

Gnome Wood is a five reel game that consists of 25 paylines which cannot be altered. Most software developers have stopped giving players the choice to alter these because why would you want to lower them and damage your chances of winning anyway? If you’re bet seems a little too much then simply lower your coin amount until you’re happy with it. We’ve also found that 25 paylines is perfect if you wish to be entertained without having your attention distracted by the many different ways you can win a prize.

Players will be able to bet as little as £0.25p or as much as £50 per spin at Gnome Wood. This may not cater for the high-rollers who prefer to wager a little bit more but it will definitely be OK for the small-stake players as £0.25p won’t be hard to find. You can alter your bet size by clicking on the coin amount, and there’s also a Max Bet option if you wish to go all out to try and win big money.

That brings us nicely on to the next section. Just how much money can you win on Gnome Wood? Well in the base game you need to be looking out for the gnome symbol which will win you 10x your stake if you manage to get five on a payline. However, other high paying symbols include the rat which will get you 7x your stake and the cauldron will get you 2.5x your stake. Maybe you should keep your eye on the golden Euro symbols though, as a win line full of these will release the incredible progressive jackpot. However, please note that you need to be playing on the highest stake to win the full amount; otherwise you will just win a percentage of it.

Even though there is a lot of money to be won on the base game, there are even bigger prizes while taking part in the bonus features. It’s important to look out for the Wild symbol which cannot be missed as it has Wild written on it. This will replace every other symbol except for the scatter (which will be discussed shortly) and it can also feature multipliers which can double payouts when it forms part of a winning combination.

If you do manage to land a Wild, then you will trigger the Wandering Wilds feature in which all the Wilds move 1 position to the left and a re-spin is awarded. You will then continue to be given re-spins until the last wandering Wild drops off the edge of the reels. This gives you a great chance to win a lot of money and you can even land more Wilds during this feature which can add more re-spins to your game, resulting in more cash!

Another important symbol to look out for is the Scatter which takes form of the Free Spins symbol. If you manage to land 3 of these, you’ll trigger the Free Spins feature which will award you with 10 free spins. During this game you will have the chance to land more Wandering Wilds and you can also trigger 10 more free spins if you land 3 more scatter symbols.

After every win there’s also a chance to utilise the Gamble feature which does exactly what it does on the tin. Do you have the courage to double your money? You will have the opportunity to pick either the copper or the golden cauldron and it’s a 50/50 chance whether you will be successful or not.

It’s fantastic to see that Rabcat have managed to create a new game that’s visually appealing and also contains lots of exciting bonus features. You really need to be making the most of the Wild symbols as these are your best chance of winning big money, but even if you don’t manage to grab a top prize, there’s still plenty of fun to be had on Gnome Wood. 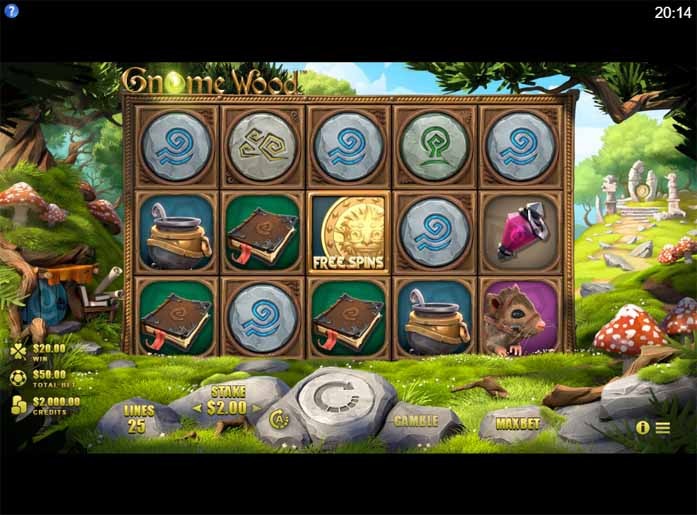 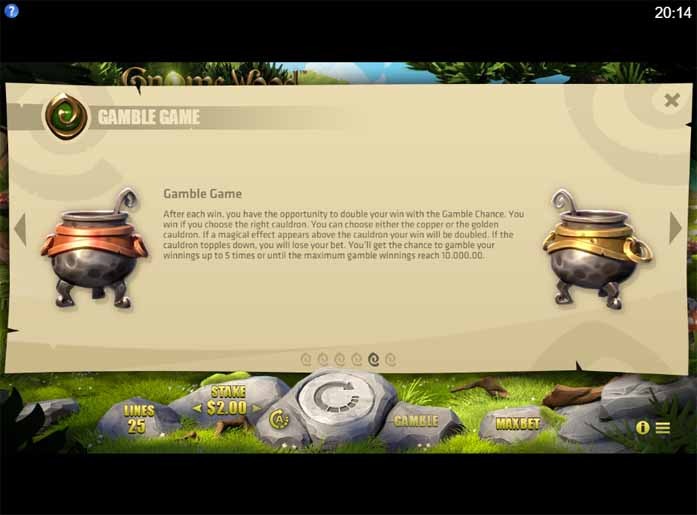