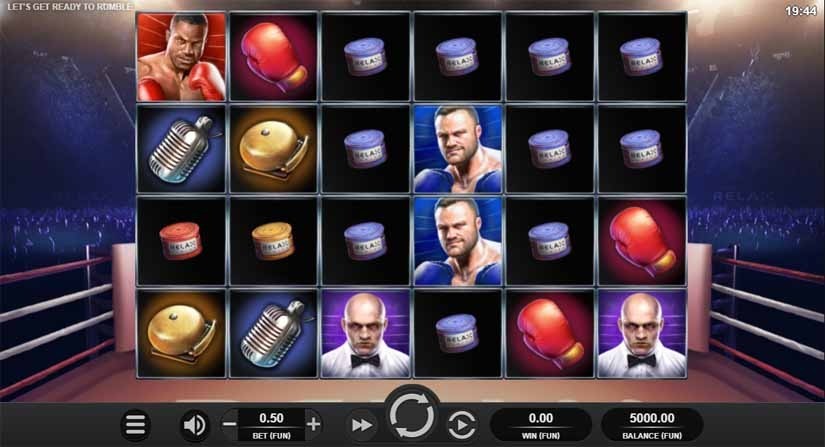 For boxing fans, the online video slot Let’s Get Ready To Rumble is a real treat. Michael Buffer, boxing announcer extraordinaire, was the inspiration for this game. Its obvious sports theme is part of a trend to attract players who previously avoided slots. The game is set in an arena where an enthusiastic crowd has gathered to see a boxing match. The scene shown when players launch the game starts with the crowd and then zooms in on the boxing ring.

The reels are filled with symbols that are boxing related, such as yellow, red, and blue glove tapes. While these are the low value symbols, higher value symbols include a boxing title belt, microphone, boxing glove and a fight bell. The most valuable symbols in the game include Michael Buffer, a referee, and two fighters; one wearing red gloves and one wearing blue gloves. A golden speedball serves as the wild symbol while a golden punching bag acts as an expanding wild.

The wild stacks features takes two to five wild symbols and stacks them. This can only happen on reels one through four.

The Rumble spins feature gives players free spins of the reels and adds as many as four modifiers to them. It is the bonus feature in the game that pays the most in winnings. As a result, the other bonus features are more likely to be activated than this one.

Four add-on features come into play during the Rumble Spins. They are Cross Wilds, Uppercut Wild, Wild Hook, and Title Fights. The Cross Wilds feature places anywhere from three to five wild symbols on the reels. The maximum number of times this can occur during one instance of Rumble Spins is eight.

The Uppercut Wild adds a stacked wild that covers the reel the furthest to the right on the game screen. The maximum number of times this can occur during one instance of Rumble Spins is three.

The Wild Hook feature takes a stacked wild and from the reel the furthest to the right and moves it to the second or third reel. The maximum number of times this can occur during one instance of Rumble Spins is two.

The Title Fight adds four more reels to the game screen. Two go to the to of the screen and two go to the bottom. As a result, there are many extra ways that winning combinations can be formed. The earlier in the game the Title Fight feature is activated the more money players are likely to win.

Let’s Get Ready to Rumble Screenshots 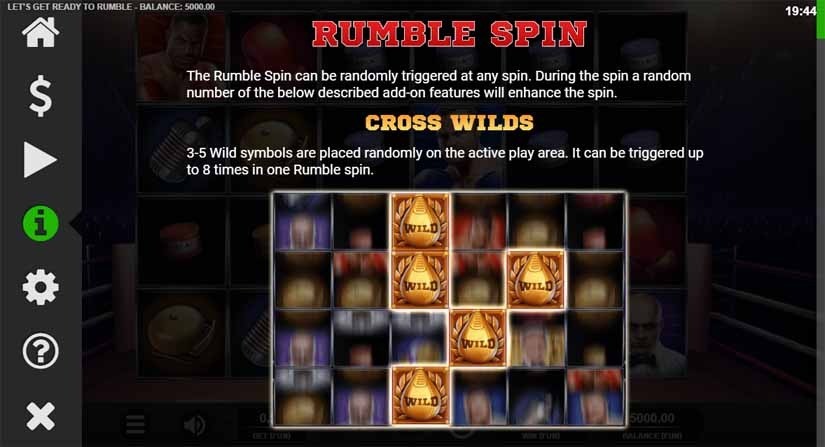 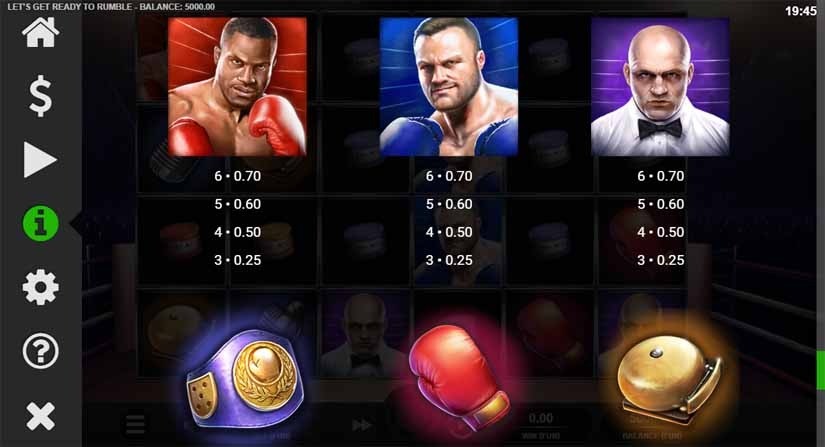