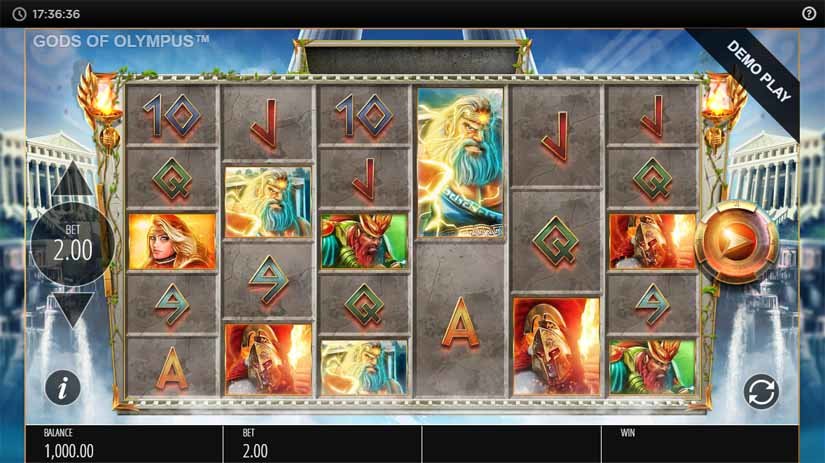 The Gods of Olympus Megaways is a Greek themed online slot that does its best to entice players. It has more action than many other Greek themed games, making it popular with players who seek out titles that offer multiple bonuses and features.

The graphics seen in this game are bright and eye catching. They include lit torches and artwork depicting the Greek Gods. Behind the reels players will see the Pantheon.

With six reels and five rows, the game features up to 1526 different ways to win. Reels are filled with symbols of Greek Gods such as Athena and Zeus. Other symbols seen on the reels include a masked figure and a Greek warrior. The Pantheon serves as a wild symbol in the game and becomes stacked at times. The scatter symbol in the game is a lightning bolt.

If Zeus appears on the reels randomly he will start giving off fire and noise. This gives players one of the game’s five modifiers. They are called Power Spin Modifiers and players can choose to purchase one if the game is not giving them one.

The five modifiers in the game are Wild, Colossal, Mystery, Bonus, and Respin Thunders. The Wild Thunders modifier adds as many as 10 of the tiles to the reels that multiply a player’s winnings. The Colossal Thunder can turn one or all six reels into colossal reels, meaning they all carry the same symbol on them for that spin only.

Players love the Mystery Thunder because it is a guarantee they will win money. Mystery symbols are added to the reels that always form a winning combination.

The Bonus Thunder is beneficial to players because it adds extra scatter symbols in positions that increase players’ winnings. The Respin Thunder takes symbols that form a winning combination and locks them. Then the reels are spun again with the locked symbols remaining in place.

The appearance of the lightning bolt scatter symbol on the reels three times or more within one spin triggers 10 free spins. Players are then presented with four crystals and asked to choose one. Like the other bonus, this one can also be triggered if players pay extra.

The Wild Storm Spins take spots on the first and sixth reels and highlight them. Symbols in those spots become wilds and any scatters that appear give players more free spins.

Finally, Rise of the Olympus Spins adds wilds and a multiplier to the reels, and in addition, gives players two extra spins of the reels for free.