This slot is automatic, it’s systematic, it’s hydromatic, why it’s greased lightning! Yes, one of the big software providers has finally gotten around to making an online slot machine based on the hit movie Grease, and it really is everything fans of the film would have hoped for. Great bonus features are found regularly, while big wins can often spin into view, plus you’ll find many of your favourite characters spinning around on the reels. Why not find out more by reading through the detailed Grease online slot review found on this page?

As you might expect from this slot, it looks absolutely great, plus the soundtrack is one that every film fan will love. Stars of the show adorn the reels, including, of course, Danny and Sandy, plus you’ll find that the reels are set in a typically 50s scene, complete with a diner. So, when it comes to the look and sound of this slot, there really can’t be any complaints.

The Grease online slot has five reels, like most other slots, and spread across these reels you’ll find 20 paylines. These paylines are fixed, so you’ll have to have all of them active on every spin of the reels. If you want to see how the paylines are set out, just look at the paytable. There’s no need to know though, as all wins are awarded automatically.

Changing how much money you bet is really easy – just click the plus and minus buttons underneath the “Line Bet” field. The least you can bet on a single spin of the reels is just £0.20, while the maximum possible bet is £20. The more money you bet, the more you could potentially win, plus those betting at higher levels will also have a better chance of winning one of the two different progressive jackpots. Of course, you shouldn’t bet more than you can afford to lose though.

The maximum prize at this slot is Danny’s Jackpot, which is the main progressive prize. You can also win Sandy’s Jackpot, which is the smaller of the two, although it certainly isn’t insignificant. You’ll find out how to win these jackpots later in this review. When it comes to the non-progressive prizes, the highest paying symbol is the wild symbol, and this pays 1,000x your bet if you manage to get five across a payline. The expanded symbols featuring Danny and Sandy are also high paying symbols at this online slot machine.

There are loads of bonus features found at this online slot, which is something we always like to say! The wild is the first of them to mention and it can substitute for most other symbols on the reels. This makes it a really useful symbol to see spinning into view. What’s more, it’s the highest paying symbol on the reels, so you’ll really want to see it as often as possible!

There’s also a really good random feature at this slot, and it can cram the reels with wild symbols – something that can lead to some really massive prizes. It’s called Sweetheart Wilds and it sees wild symbols falling onto the reels. You could get up to eight wild symbols if you’re really lucky! This feature doesn’t activate too often, however you should still see it a few times in a playing session.

Then there is the main bonus round, and this starts when you manage to get the Grease logo on reels one, three and five. You will then get to choose from three different bonus features: Better Shape Up Free Games, Rydell High Yearbook Bonus and Summer Nights Free Spins…

The Better Shape Up Free Games are fun, and you’ll receive 12 free spins in total. You’ll find that there are only high paying symbols on the reels, so any winning combinations you get are likely to be significant ones! The Rydell High Yearbook Bonus is a simple game where you’ll need to simply pick photos and win prizes – the most you can win is 100x your bet amount. Finally, the Summer Nights Free Spins see you getting up to eight wild symbols on the reels for every free spin. You’ll only get four free spins in total, however each one can bring some massive prizes.

If you’ve read through this entire Grease online slot review, you should know by now that this is an absolutely fantastic game. After all, it offers two progressive jackpots, loads of bonus features and fantastic gameplay, so what else could you possibly ask for? You’ll find the Grease slot at most casinos running on Playtech software, so why not start playing it today. 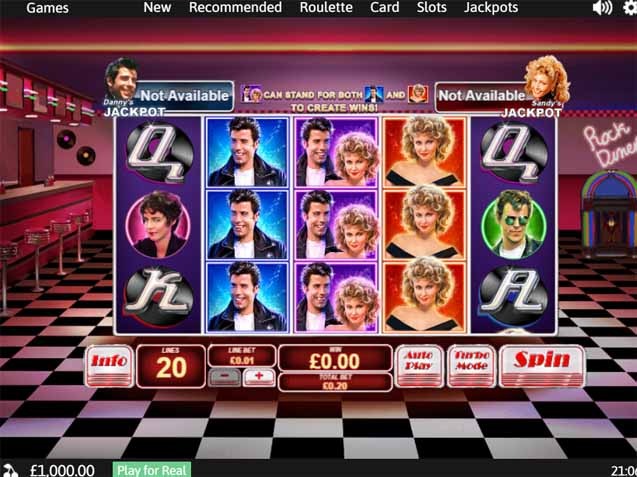 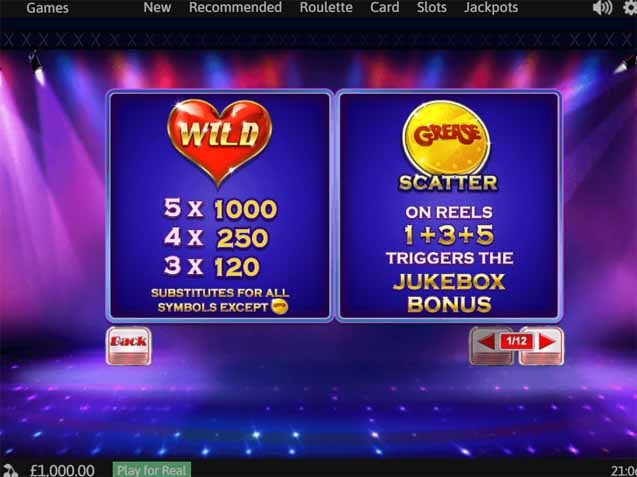