Twin Happiness is a simple but fun and colourful online video slot machine. Its stimulating colours are designed to inspire happiness in players before they even try their luck at the game.

The dark red background behind the reels emits a quit burst of energy to players while they are engaged in Twin Happiness. The pair of reels give Twin Happiness its name. Every time players spin the reels they will see that anywhere from two to five of the reels are identical. Players will see the same symbols in the same places on all of the identical reels.

The reels are filled with symbols of Chinese letters, a Chinese hat of gold, two oranges, a red lantern, a seven, and the traditional bar symbol seen in all classic slot machines. The Chinese hat is the highest value symbol in the game while the two oranges are its wild symbol. If players get five of the Chinese hat on the reels at once they win a cash prize 40 times the amount of their bet on that spin.

With identical symbols on both sets of reels, players essentially have two chances to win money with every one spin of the reels. This is all the motivation that many players need to spend their money on the game.

While this game lacks traditional bonus features, the twin reels themselves are the bonus in the game. The number of twin reels on the screen will vary from spin to spin. It is safe to say that Twin Happiness is not the typical slot machine game. Bonuses are virtually non existent. The appeal of this game lies in the dual reels. They make the game stand out from others that appear to be just as simple as this one is. 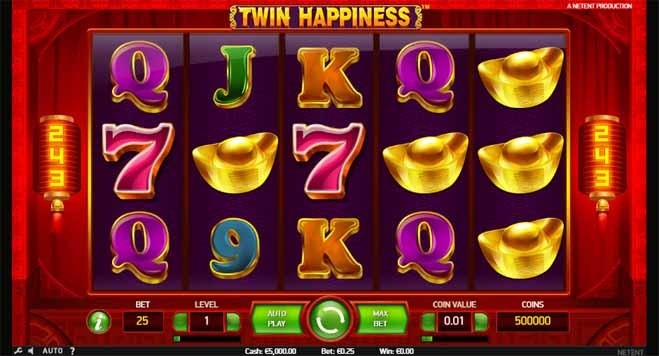 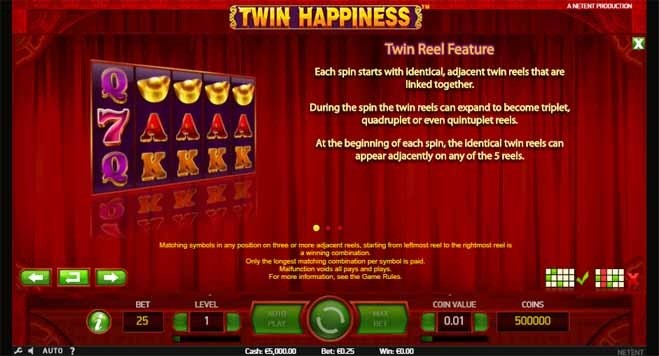 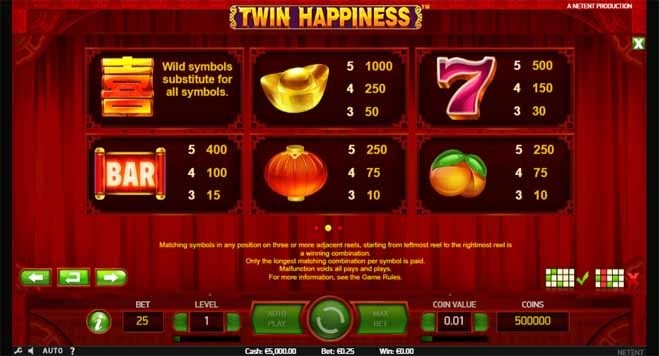 Twin Happiness is probably best for players who are bored with classic slots but may not be ready for more involved modern day slots. Playing this game can be a good way to make a transition between the two.

Once a player understands how the duel reels work, this game becomes much more interesting. Since this is the main feature of the game, it helps to have a thorough understanding of it. This may be tough for some players because it is not a feature that slot machine players are generally familiar with.

Only time will tell if other online slots adopt the twin reels that give this game its title and its appeal. Much of that may depend on the success of this game and how much players enjoy this feature. It may be something that turns some players off of the game.