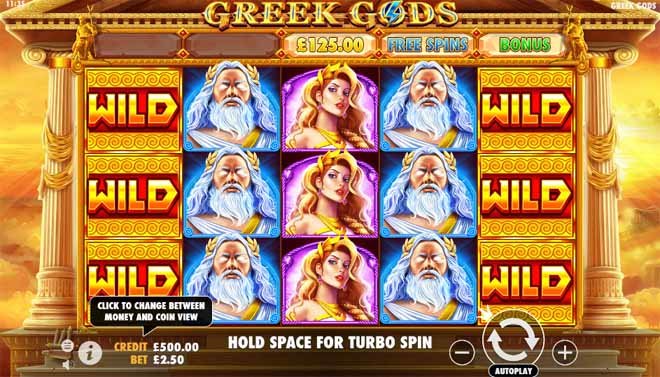 Greek Gods is one of many online video slots with this common theme. The question is whether or not this game presents the theme better than similar games.

The game takes place in Olympus, where the Greek Gods were have said to lived. The reels are housed in a Greek temple. Behind the reels players see a bright blue sky with fluffy white clouds and Mount Olympus. To the right of the reels is the face of Zeus, who is also one of the game’s symbols.

Others include Aphrodite, Hera, golden harps and cups. The game’s logo is also a symbol on the reels and there is a separate wild logo. The scatter symbol in the game is a thunderbolt.

On top of the reels are prize boxes. Some hold the power to activate free bonus spins, or a bonus game, while some simply contain a cash prize for players. On each side of the reels players will see pillars.

If players get a stacked reel filled with scatters they win a prize. However, if players get five of the scatter symbols on the reels at once they get extra spins. These extra spins can be re-triggered an unlimited number of times. During free spins, every reel has prizes on it that players could potentially win.

The other bonus feature is the Wheel of Fortune. Players spin the wheel and can win a multiplier that pays as little as 10 times their bet or as much as 1,000 times their bet. 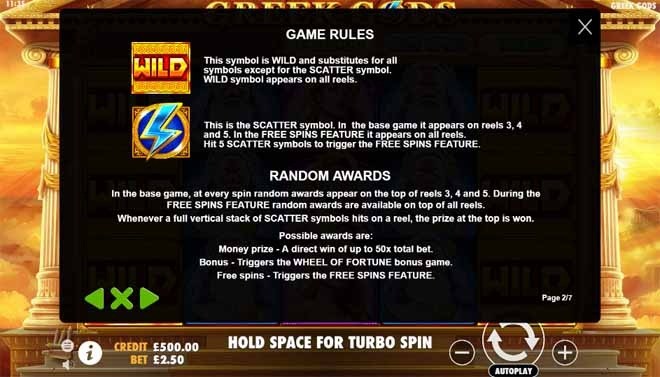 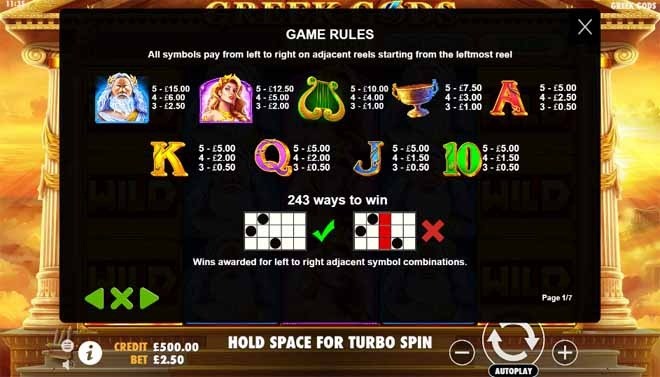 Countless slot machines are based on a Greek theme. They have explored every character and story in Greek mythology. This makes it very difficult for any one Greek themed game to succeed. Greek Gods may or may not attract players, as the bonus features are exciting, but lack the complexity that many other slot’s bonus features include.

The game is visually appealing, and this may be enough to get some players to try it. Greek Gods is neither the best or the worst Greek themed slot in the industry today.

For those who find games with too many bonuses, confusing this is one they may prefer. However, for most other players, there may be little to nothing to lure them into trying the game.

The fact that prizes are randomly chosen and awarded by the game is maybe its biggest selling point. The anticipation of hoping this will happen adds a level of energy and excitement to the game that players wouldn’t get from it otherwise. Players will find that the randomness of the game is something that makes it very compelling.