Okay, so some movies from the 1980s haven’t stood up to the test of time, but there are many others that have become cult classics – avidly watched by Generation Xers whenever they can. One of these undoubted cult classics is Highlander, the 1980s adventure fest starring Christopher Lambert and Sean Connery. So, if you’re a fan of this movie, this is the perfect slot for you! The fact that it is made by Microgaming only adds to the certainty that this online slot will be a fantastic one. Why not read our detailed Highlander slot review today, and see if this is the perfect new online slot for you?

As soon as this slot loads, you won’t be able to mistake it for any other theme. The actual characters from the movie are found spinning around on the reels, and there are also two backgrounds seen during the game – the Highlands and New York – which are both featured in the original film. This slot doesn’t just look great on a desktop though – the impressive visuals are transferred over to the mobile casino world too. One small complaint: Microgaming have used 10-A symbols, which has been done many times before and doesn’t show a huge amount of effort on their part.

Highlander is a slot with five reels, and you’ll find an impressive 243 different ways to win spread over these reels. These paylines are fixed, as is the case with most other slots offering 243 paylines, so you have to have them all active on every spin. This won’t be an issue for most though, as more paylines means a better chance of spinning in a massive instant cash prize! Because there are 243 ways to win, the paylines are easy to work out – simply get three or more symbols on consecutive reels, starting from the first reel, and you’ll be a winner.

While you can’t alter the number of paylines, you can change your bet amount though. Those looking to play at the lowest stakes might have to dig deep to find the £0.40 minimum bet, while those looking to gamble at the highest stakes might not be impressed by the maximum bet of £30. So, this is undoubtedly a slot for those who like to play at mid-level stakes. You need to multiply your total bet amount by the figure shown on the paytable to work out your prize – this is different to other slots, as these make you use the bet per payline.

But what about the prizes at this online slot from the people over at Microgaming? Well, Microgaming aren’t known for being stingy when it comes to prizes, and they’re certainly offering a massive jackpot to the luckiest players of Highlander. The most that can be won per spin at this slot is an impressive 3,416x your stake, meaning that those playing at the highest stakes could win a prize worth over £100,000. Overall, this is a medium variance online slot, so you should get a good mixture of different sized wins. The medium variance also means it’s perfect for new players, who want something exciting, but don’t want to risk losing all their cash in the blink of an eye.

While the best feature of this slot is probably the rocking 1980s soundtrack, there are some bonus features as well, and these can bring loads of fun, as well as some massive prizes. The first of these to mention is, as usual, the wild symbol, and this is represented on the reels by the Highlander logo. There’s nothing special about this symbol, aside from the fact it can substitute for all other symbols on the reels, so you won’t find anything like wild multipliers at this slot.

There are then two bonus features to mention, and the first of these is called the 2 Scatter feature. This is a simple bonus which happens, as the name suggests, when you get two scatter symbols on the reels (these are represented by the Watcher). When this happens, you’ll see both the scatter symbols turning into wild symbols, thus enhancing your chances of winning a nice cash prize. It’s not the most exciting bonus ever created, however it should prove useful when you play this slot!

The main bonus at this slot is the free spins though, and they start when you manage to get three or more scatters anywhere on the reels. You will get 10 free spins in total, and these take place with New York as the backdrop. These aren’t standard spins either, as there’s a great feature added – Quickening Wilds. This means lightning can strike the reels at any time and leave a symbol wild. Every time lightning strikes, a larger number of symbols will be transformed into wilds. So, by the 10th spin, you could find yourself spinning in some absolutely massive winning combinations!

Highlander is a cult movie, and this new slot from Microgaming could also achieve cult status in the future. While you won’t find loads of bonus features at this slot, you will find a slot with fantastic gameplay, as well as great graphics and an even better soundtrack. Even if you’ve never seen this film before though, you should love playing this slot, thanks to a massive jackpot on offer to the luckiest of players. So, why not spin the reels of Highlander today, at one of our recommended Microgaming online casinos? 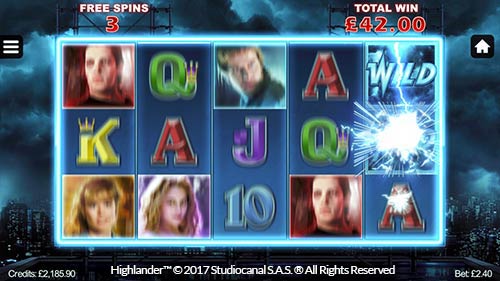 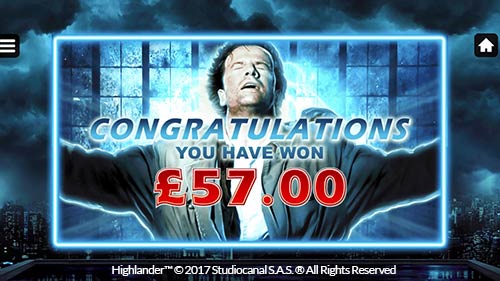