Futuristic themes are really popular with online slots providers – in fact, most players will have lost count of the amount of sci-fi or futuristic slots they’ve played over the years. This means that it takes a great slot with a futuristic theme to leave a mark in the online slots world, however Playtech have managed to do just that with their Hologram Wilds slot. This is a slot that looks incredibly slick, and is incredibly enjoyable to play. Perhaps more importantly though, it’s a slot that leads to loads of excitement, as well as some potentially massive prizes. So, why not find out more about this Playtech title, by reading through our comprehensive Hologram Wilds slot review?

Before we look at any other aspects of this game, the graphics really have to be mentioned. This is because they are some of the most futuristic graphics around, and certainly don’t look like the visuals you’ll find at most online slots. The symbols might be standard ones, such as cherries and watermelons, however they’re presented in hologram form. So, it might be accurate to say that this is a slot based on classic fruit machines, but also one that has brought the concept into the 21st – or perhaps the 22nd – century.

There are five reels at Hologram Wilds, however they aren’t the same size as the reels at most slots. While other slots feature reels that are three symbols high, there are four symbols on each reel at this game. You’ll find 40 different paylines spread across these reels, which is a decent amount, and one that means every spin of the reels is an exciting one. Don’t expect prizes to spin into view too often though, as this is a slot that is incredibly volatile. So, wins come less often than they do at other slots, however when they do arrive, they can be massive.

Hologram Wilds is a slot that is aimed more towards medium to high stakes players, as the minimum bet amount, which is £0.40, will be too much for those with the smallest of bankrolls. The maximum bet at this slot is an impressive £400. Remember that the win amounts shown on the paytable are based on your bet per payline though – to figure this out, just divide your overall bet by 40. It should go without saying that the more you bet per spin, the more money you could potentially win.
But what about the prizes? Well, the highest paying symbol at this slot is the wild symbol, and you’ll win a prize worth 1,000x your bet per payline when you get five of these symbols along a payline. So, the maximum possible prize per payline is £40,000. Symbols come stacked in this game though, so it’s possible to actually exceed this prize, by getting multiple wins on the same spin of the reels.

Hologram Wilds isn’t laden with bonus features, however the ones that is does offer are exceptionally good, and can lead to some really nice prizes. The first of them to mention is the wild symbol, which is easy to spot on the reels. As with most other wild symbols, it can substitute for most other symbols on the reels, therefore giving you a better chance of scooping a prize. What’s more, it also comes stacked on the reels, meaning that you could have wilds completely filling one or more reels – which could lead to some massive payouts.

The only other feature to mention is the free spins, and these start when you manage to get three of the crown symbols anywhere on reels two, three and four. The free spins really are the highlight of this game, and you’ll start with five of them. It’s not unusual to activate extra free spins while the feature is active though, and you can do this by getting three crown symbols on the reels once again. You can reactivate free spins an unlimited number of times.

The fact that you can get unlimited free spins is good enough for most players, however there is also another great aspect to the free spins – you will find that the wild symbols appear much more often. The result? You should find yourself winning much more money than usual. In fact, the free spins usually provide the biggest payouts at this slot, so you’ll want to activate them as often as you possibly can.

There are no other bonus features at this online slot, but don’t let that put you off. While some software companies cram their slots with features, Playtech have clearly decided to go for quality, rather than quantity. This will appeal to some players, but others might decide to head to a slot with more features, such as many of those from the people over at BetSoft.

Hologram Wilds isn’t the most complex of slots, but this isn’t a criticism. In fact, in a world where most slots seem to have loads of complex features, Hologram Wilds will be seen as a breath of fresh air by many. The look and feel of the slot is fantastic, as you’d expect from a Playtech title, while the prizes can be massive – especially if you manage to activate the free spins, which are some of the best free spins you’ll find at an online casino. So, overall, Hologram Wilds is definitely a game that fans of online slots should try as soon as they can! 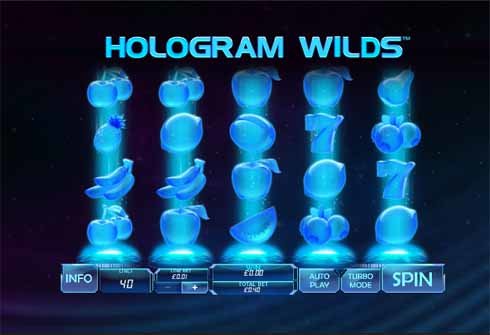 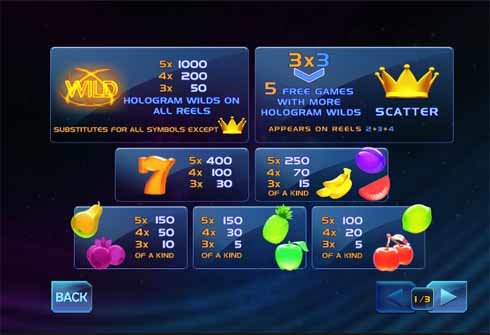