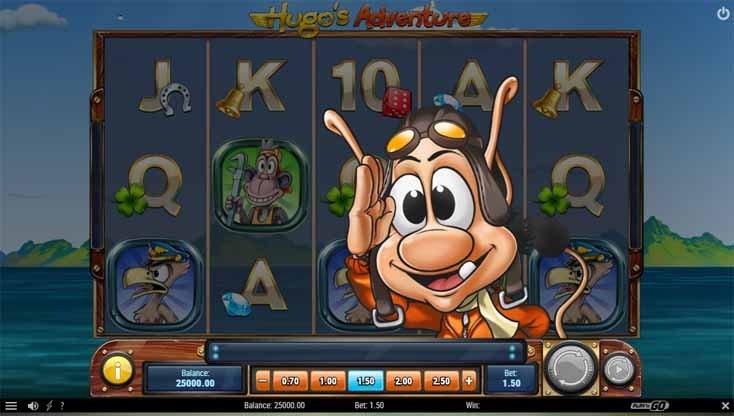 Swedish TV viewers may remember a colorful cartoon character named Hugo. The popularity of the show led to the creation of a series of online slot machine games with Hugo as the main character. The fourth release in the series is Hugo’s Adventure. This title has more to offer than its three successors. It follows the antics of Hugo and his animal friends.

All of the animation in this game was done in cartoon style, as homage to the TV show that inspired it. It takes place on Hugo’s submarine, which he is about use to complete an underwater mission.

The important symbols on the reels include Hugo, as well as a monkey, an eagle wearing a hat and acting as captain of the submarine, and a female troll who serves as a stewardess, as well as the submarine itself. An aeroplane, presumably Hugo’s is the scatter symbol, while the wild symbol is represented by Hugo.

When players get three of the aerospace scatter symbol on the reels at once, they trigger the free spins bonus. This bonus feature is called the Air Ace. It begins with Hugo entering his wooden propeller plane.

While the reels are spinning, Hugo begins flying the plane into one of the symbols. He will hit one of three symbols; a black mine, a multiplier or an extra life. In the meantime, flying wilds travel from the right side of the reels to the left side. They start on the fifth reel and fly to the first reel, where they then disappear from the screen. The flying wild on the fifth reel grants players five free spins. An increasing number of wilds on the reels lead to an increasing number of winning combinations.

The free spins bonus ends when Hugo flies into a mine. As a result, his plane explodes. His only hope is to keep getting free lives in order for him to continue flying.

Another way to get free spins is to get the submarine symbol on the second and fourth reels at the same time. This bonus is called the Underwater Adventure. It involves Hugo entering the submarine and taking it to the ocean’s bottom. At the bottom of the ocean treasures lie in wait.

With multiple lives underwater, Hugo is able to search for those treasures. On the screen are three pearl shells and players must decide which one to click on. If the chosen pearl shell has cash in it, players can then open the chests at the bottom of the ocean. They keep doing this until they open the one that is the wrong choice.

Finishing the game gets players a multiplier that awards them 20 times the amount of the spin that triggered the Underwater Adventure bonus. 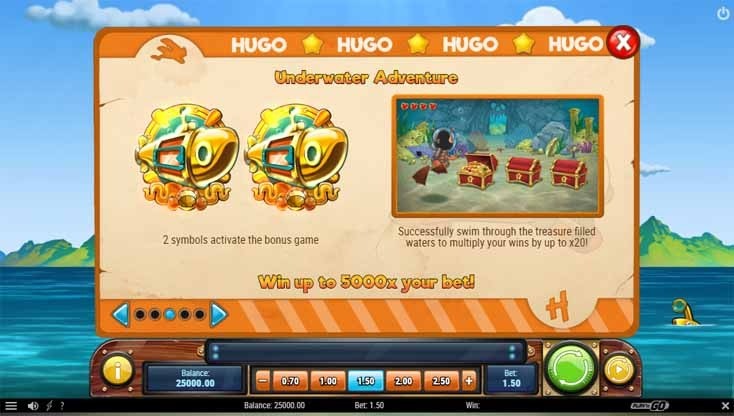 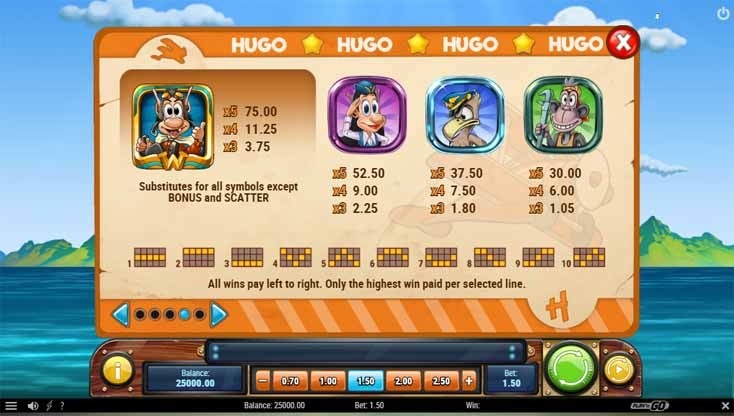 Even for those who hadn’t encountered Hugo before, this game provides a fun escape from reality with its entertaining characters.