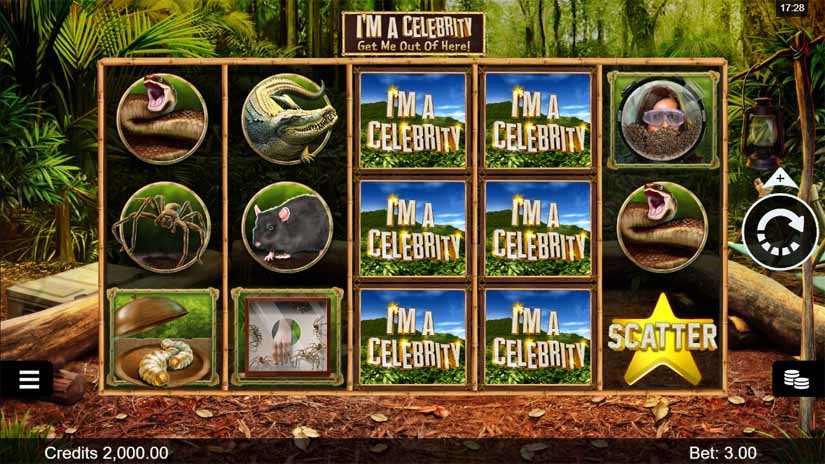 Some video slot machines are inspired by game shows. One of them is I’m A Celebrity Get Me Out Of Here. Anyone that is familiar with the game show will recognize many elements of this slot machine. The premise of the show is a group of celebrities living in the wilderness on a tropical island in Australia.

Behind the reels players will see clouds in the sky and a forest with hills in it. The frame surrounding the reels depicts bamboo. Some of the symbols on the reels are associated with the wilderness. Animal symbols used include a rat, spiders, a frog and the eye of a crocodile. The standard symbols in the game reflect its theme in the slithery creatures found on those symbols. A gold star is the scatter symbol while the game’s logo is the wild, which may become stacked at times.

Three of the gold star scatter symbols on the reels at once triggers free spins. This round is called the Bushtucker Trial Bonus. Players get to choose the specific bonus offer they want. They can choose from 10, 25 or 50 free spins. The 10 free spins come with a multiplier that gets players a cash prize five times the amount of their bet. The 25 free spins come with a guarantee that a player will win twice the cash prize the 25 spins are worth. There are no extra perks to the 50 free spin bonus.

The Bushtucker Trial was a part of the game show that involved contestants completing certain tasks. If they completed the tasks successfully, their team would get stars. Team could then use those stars to obtain luxuries such as filling foods.

For contestants these tasks were often difficult because they involved having to do something that would make them uncomfortable. Luckily for players of the slot machine game, the bonus of the same name is much more pleasant.

I’m A Celebrity Get Me Out Of Here Slot Info

I’m A Celebrity Get Me Out Of Here Screenshots 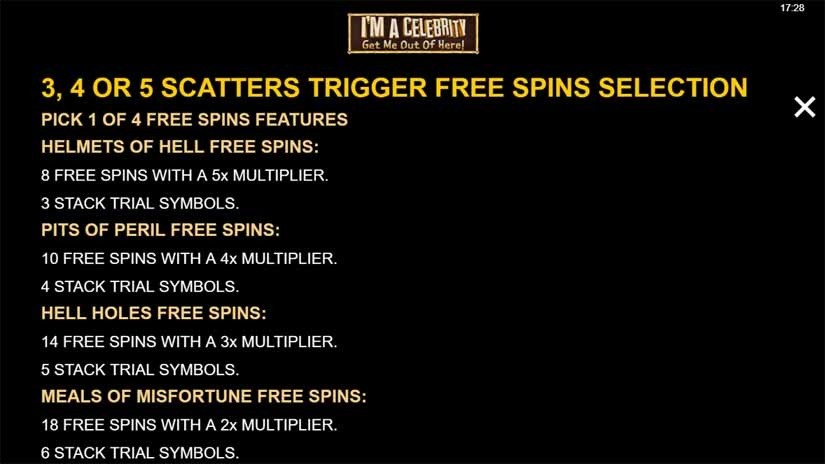 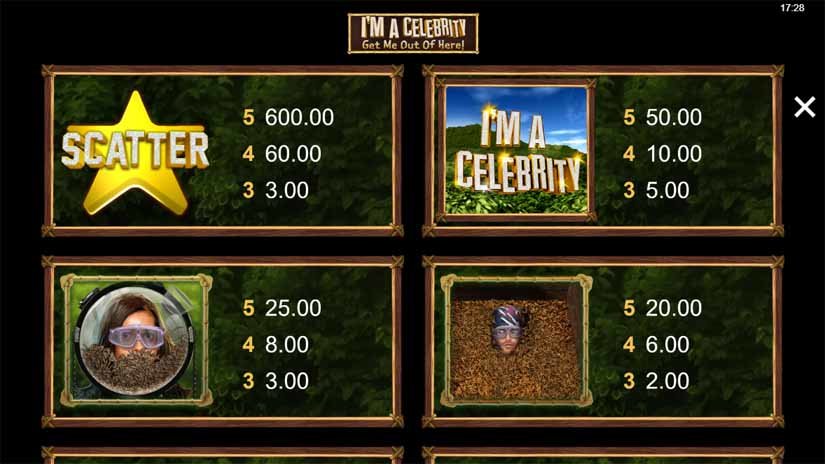 This game was created with a specific group of players in mind. Aside from the free spins, players that aren’t familiar with the game show might have very little interest in the slot.

Its lack of any bonus feature other than its free spins is something that will make it difficult to compete with other game showed themed slots. This is in addition to the fact that the game show was not something that became a worldwide hit with viewers. Those who want to get a taste of what the game show was about may find that the slot allows them to do this. It may satisfy any lingering curiosity.