Play the Jekyll and Hyde Slot Game for free 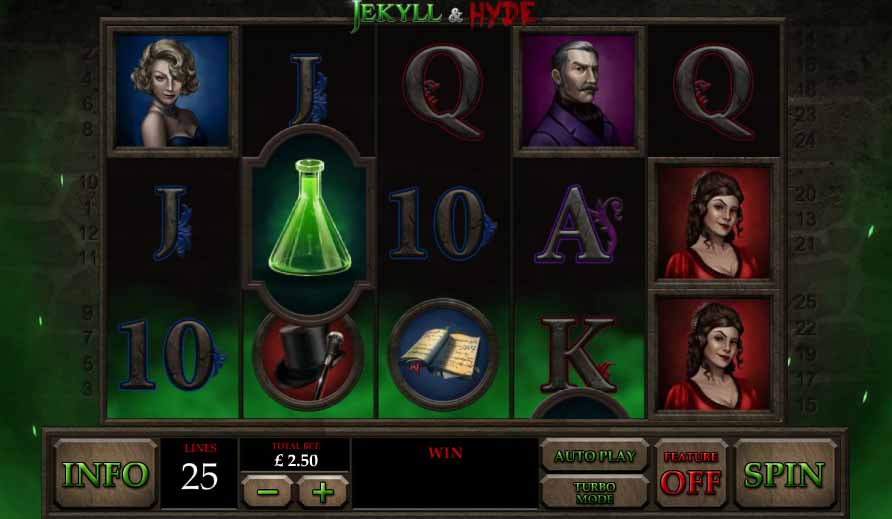 Not to be confused with the similar slot from BetSoft (or indeed the one from Microgaming), this version of Robert Louis Stevenson’s famous novel takes a slightly simpler form. Simplicity does not automatically make a slot bad though, and Jekyll & Hyde from Playtech proves this. It has a dark feel to it, mirroring the murky underbelly of Victorian London, and you’ll find all the main characters from the novel spinning around on the reels – including, of course, the two eponymous characters.

Playing this slot really couldn’t be easier, as it doesn’t try to introduce any fancy rules or complex features. To get started, you simply have to select the amount you want to bet per payline – which can be anything from 0.01 coins through to 100 coins – and then get the reels spinning. It should be noted that, unlike some other slots, Jekyll & Hyde has fixed paylines, so you’ll have to play all 25 each and every spin.

As with most slots, Jekyll & Hyde has some bonus features to mention – although not so many that the enjoyment of the base game is ruined. The first of these is the wild symbol, which is represented by Dr Jekyll himself. In keeping with the story, this isn’t a normal wild symbol though, as when it spins into view it will turn into Mr Hyde, and expand across the entire reel if a win is available. Dr Jekyll only appears on reels two, three and four.

The main bonus at Jekyll & Hyde is activated when three or more of the green potion symbols are spun in anywhere on the reels. When this happens, you’ll be given two options to choose from: Jekyll Spins or Hyde Spins. If you choose the former, you’ll get an increased multiplier every time a scatter lands on the fifth reel, while choosing the latter will cause any character symbols landing on the fifth reel to turn wild for the rest of the bonus. The bonus ends when four red potions have landed on the fifth reel.

The final thing to mention is the Feature Bet, and this can be turned on before any spin of the reels. When you do so, the amount you bet will be doubled, however the scatter potion will turn red and the bonus feature can be activated even if one or more of the scatters are just above or below the visible symbols. This means that you have more chance of activating the bonus round – but also means that you’re risking more money as well.

Jekyll & Hyde might not have the fancy graphics of some other slots, however it makes up for this by having some fantastic bonuses, which are loads of fun to play and can also lead to some nice prizes. So, if you’re looking for a simple yet enjoyable slot to play, Jekyll & Hyde could well be a great choice. 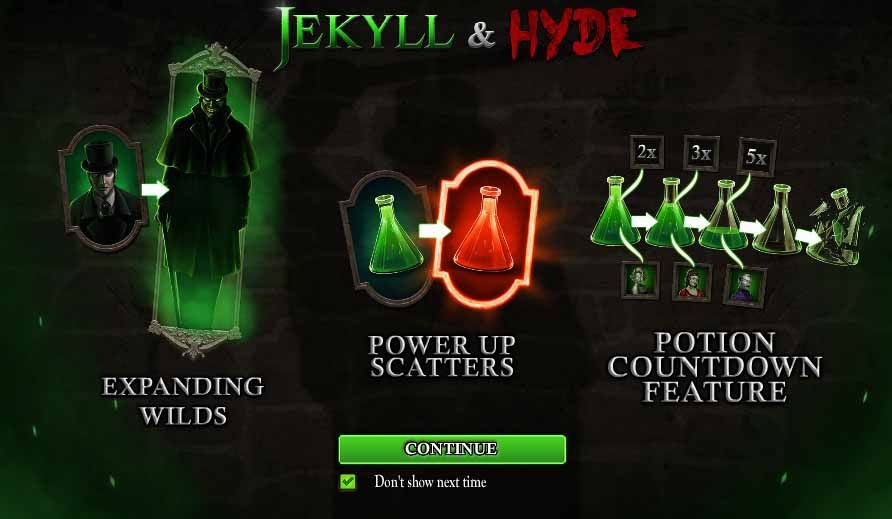