In case you hadn’t noticed, Christmas has sneaked up on us, and slots fans will know what that means: loads of Christmas themed slots being released! NetEnt’s offering is called Jingle Spin – a title that leaves you in no doubt as to what it’s based on – and it’s perfect for those looking for some traditional Christmas antics. With baubles, elves and other Christmas symbols on or around the reels, you really will be in the festive spirit when you play. Your spirits will be even higher if you manage to win a big cash prize though! Why not take a look through this Jingle Spin review today and see why you should be playing it online?

For the moment, ignore the wheel to the side of the reels, as well as the elves sitting above the reels. The actual reels are three symbols high and there are five of them in total. Across the reels you’ll find 20 paylines. We know that this isn’t the most paylines you’ll ever have seen, however the innovative gameplay – which we’ll talk about later – means that there’s still loads of excitement every time you spin the reels. The paylines are fixed, so you’ll have to have them all active on every spin.

The lease you can bet per spin at this slot is just £0.20, which should be low enough for the majority of people. The maximum bet comes in at an impressive £200, which should keep even the highest spending players happy. To adjust the amount you bet, just alter the Level and Coin Value. Always remember that the more you bet, the more you could potentially win. Of course, you should never bet more than you can afford to lose though.

But what about the prizes? Well, the most you can win on any spin or free spin is 473.75x your stake, which is pretty impressive. The highest paying symbol on the reels is the red and gold bauble, so you’ll want to see this spinning into view as often as possible. This is a medium variance online slot machine, meaning you should get a good spread of wins while you are playing. Whether you like this or not really depends on the type of online slot you prefer playing, but we think the majority of players will be happy with the spread of the wins they receive.

The first of the bonus features to mention is the wild symbol, which can appear on any reel and substitutes for any other symbol. This means that you’ll want to see the wild symbol on the reels as often as possible (especially when you find out what it can also do). There’s no multiplier attached to the wild symbol, which is disappointing, however it’s still a really helpful symbol.

Now we can focus on the wheel to the right of the reels, as well as the elves up above. On every spin, Santa will spin his wheel. When he does, he could select one of the following: a spreading wild feature, free spins, a cash prize or a surprise feature. When one is selected, you’ll find it thrown to one of the elves. The elves then move the prize one place to the left on every spin. You’ll only win that prize if you manage to land a wild symbol on the reel below the prize.

The prize you’ll really want to land is the free spins, as these can lead to some massive prizes. On every free spin, you’ll be guaranteed a prize on Santa’s wheel, meaning that the elves nearly always have their hands full. This means that any wild symbol appearing on the reels should activate a prize. You can even win more free spins while the feature is active – just get another free spins prize to an elf above a wild symbol.

That’s everything when it comes to the bonus features. There really aren’t too many, however the main bonus feature is absolutely fantastic. You’ll waiting in anticipation of Santa spinning in a prize and you’ll then be jumping for joy when that prize finds its way to an elf above a wild symbol.

We absolutely love Jingle Spin from the people over at NetEnt. It’s got the perfect vibe for Christmas, but that’s not all, as this game also has a great bonus feature and offers loads of potential prizes. Why not start playing this slot today and one of our recommended casinos? You could find yourself winning a nice Christmas present when you do. 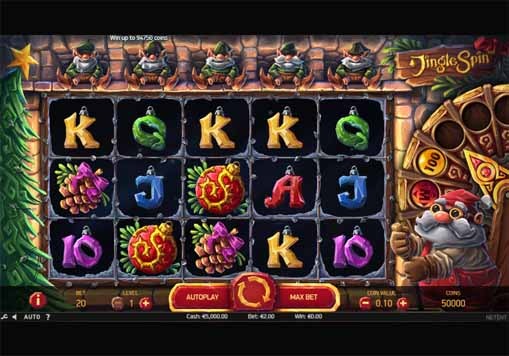 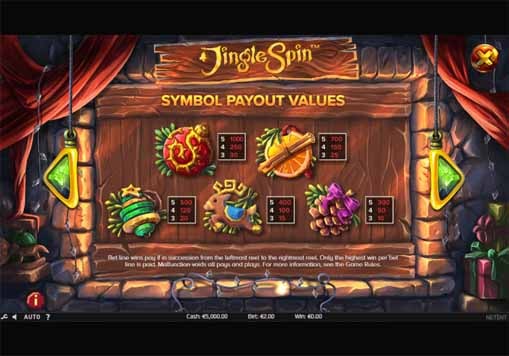