In 2015, the long-awaited fourth instalment of the Jurassic Park franchise was released. While it didn’t satisfy the cravings of some ardent fans, most agreed that it was a rip-roaring movie, packed full of action and interesting plot twists. If you loved this movie – and, to be honest, even if you didn’t – you’ll really enjoy playing the Jurassic World slot from Microgaming. The fact that Microgaming already have another title with the same theme – Jurassic Park – shows that they know exactly how to create a slot based on a movie blockbuster.

From the moment you see the Jurassic World logo in the loading menu, the excitement starts to build. This excitement only increases when the actual game starts though, thanks to the stunning graphics and the inclusion of many of the film’s stars on the reels. Of course, you’ll also see plenty of dinosaurs on the reels as well, including the terrifying velociraptors, and the Indominus Rex.

Jurassic World is a slot with five reels and 243 different ways to win. This means that you won’t find actual paylines on the reels – instead, just getting three identical symbols on consecutive reels (starting with the first reel) will see you being awarded a prize. The fact that there are so many different ways to win during the base game really does make every spin of the reels an incredibly exciting one.

But what about the stakes at this slot? Well, the lowest possible bet is £0.30, while the maximum bet amount is £7.20. This means that this slot is good for those looking to play at low/medium stakes. The bets won’t be high enough for those looking to play at the highest stakes though. Jurassic World is a medium/high variance game, therefore meaning that you could lose money quite quickly, but that you could also win a lot of money quickly.

During the base game, the highest paying symbol is the mosquito encased in amber, while the Jurassic Park logo and all the human characters are also high-paying symbols. All dinosaur symbols lead to lower wins, although they can still be significant. The most that can be won on a single spin of the reels at this slot when playing at the highest stakes is £102,000, which is a pretty impressive figure.

Microgaming have provided players with some fantastic bonus features at Jurassic World, however they haven’t gone over the top, therefore meaning that the base game isn’t overshadowed. The first of the features to mention is the wild symbol, and this is represented by the Jurassic World logo. This symbol can substitute for other symbols on the reels, and it also comes stacked, giving you a better chance of spinning them into view. There is also a scatter symbol at this slot, and it’s the mosquito encased in amber. This will award a prize whenever three or more land anywhere on the reels. If you get two of them on the reels, they will both transform into wild symbols.

There’s also a really good random feature at this slot, and it’s called the Indominus feature. Fans of the film will know that the Indominus Rex is the enhanced version of the T-Rex, and that it provides plenty of frights during the movie. In this game though, it brings prizes, as this feature could see you winning up to 1,000x your stake! The graphics attached to this bonus are also amazing, and will impress any fan of the franchise.

When you manage to get three or more mosquitos scattered anywhere on the reels, you’ll start one of three free spins bonuses. The one you get will be decided randomly – until you’ve activated the feature 15 times, after which you’ll be able to choose which of the bonus rounds you want to play. The free spins take place in three different locations: Gyrosphere Valley, Creation Lab and the Raptor Den.

During the Creation Lab bonus, you’ll also receive 10 free spins. This time though, you’ll find that Rolling Reels have been activated. This means that winning symbols will fall away and be replaced by other symbols, meaning that you could win multiple times on a free spin. You’ll also find Cryo Wilds on the reels – these are wild symbols that remain in place for three wins.

Finally, there’s the Raptor Den bonus, and once again you’ll receive 10 free spins. During these, all scatter symbols are wild, and they will also be held in place until you get three or more scatters on the reels, at which point you’ll receive five extra free spins.

Jurassic World is a fantastic slot, and it is a worthy successor to Microgaming’s incredibly popular Jurassic Park slot. The graphics and animations will please every fan of the film, however even those who didn’t enjoy the latest instalment of the series will like playing this game, thanks to the massive prizes that can be won. It’s the bonus features that really make this slot stand out though, as they can lead to some big prizes, and also bring loads of excitement. 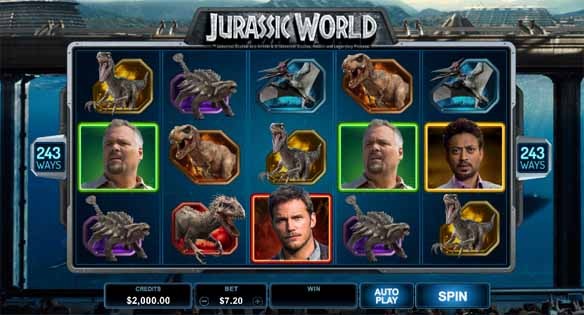 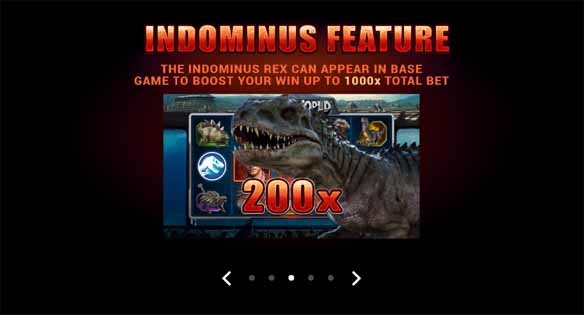