King of Atlantis gives players a fascinating look at the character also known as Poseidon. It follows his adventures and can actually help players learn more about him. In this online slot machine game, the King explores the lost city of Atlantis.

The game opens with a video showing Poseidon standing next to Atlantis with a Trident in his hand, about to embark on an adventure. The background screen seen behind the reels is the city. The reels are framed in gold and surrounded by a seabed filled with coins.

The main symbols seen on the reels are a harp, red haired mermaid girl, a ring, a crown, a dolphin, a patterned stone, a seashell and also an amphora. Players will notice that the dolphin and the mermaid girl are the two most valuable symbols. The King is the game’s wild symbol, though there is no scatter symbol.

The other bonus feature is the Poseidon Free Spins. To activate this feature, players must get the bonus symbol on the first reel along with a wild symbol at any spot on the reels. When they do so they get eight spins of the reels for free. Any wild symbols that were on the reels before the free spins were awarded stay there until all eight have been completed. Players will find that they are not able to re-trigger the free spins during this feature.

Though this game is simple to play, that doesn’t make it any less entertaining. The simplicity of King of Atlantis makes it appealing to players who just want to relax and unwind with a fun game. It is also a game that players can use to introduce themselves to the world of online slot machines.

With a theme that many people are familiar with, King of Atlantis has worldwide appeal among players. The story is one that keeps players entertained and brings them back to the game over and over again. Exploring the city is something that many players find fascinating. Doing so alongside Poseidon makes it even more fun.

The interesting symbols used in the game make it that much more entertaining. Players love the mermaid and Poseidon himself. They enjoy seeing these characters on the reels and eagerly await their appearance.

The appealing part of this game is that the bonus features give players an exciting way to win money. The free spins and extra large wilds add to the game’s excitement and its entertainment value.

It is likely that this game will keep finding new fans as a growing number of players discover it. Appropriate for players of all ages, King of Atlantis is one game that everyone can enjoy. The game has proven to be a big hit thanks to the great graphics and symbols used.

Another great game similar to the King of Atlantis slot is the Koi Princess slot game. 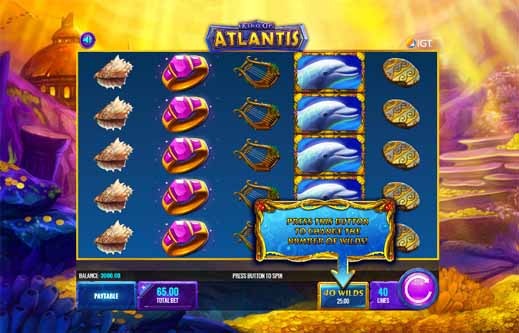 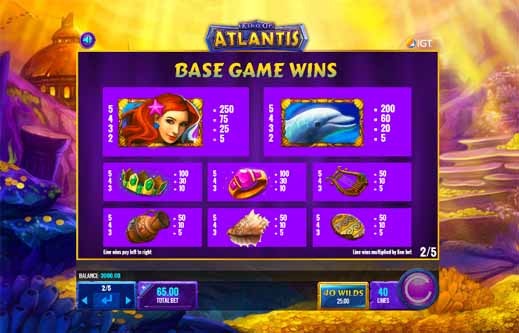