Legend of the Nile

Even though there have been quite a few slots released over the years with an Ancient Egyptian theme, Betsoft’s latest offering definitely gives them all a run for their money. Legend of the Nile allows you to explore the treasures of the longest river in the world and also invites you to learn about three special Gods: Isis Queen of Heaven, Ra of the Sun and Anubis of the Underworld. It’s important that you give these deities special attention too because they may open the heavens to release a shower of money down on your head.So, take a read of our review to find out about the hottest slot right now!

Upon loading the game for the first time you won’t be surprised to see a beautiful crystal lake with pyramids surrounding it and also the Great Sphinx of Giza. Visually it looks amazing and you’ll be submersed into the atmosphere of the slot straight away with symbols that include Egyptian hieroglyphics, the Egyptian Gods Isis, Ra and Anubis, and many others. While spinning the reels you’ll hear music that matches the theme of the game and also special audio effects.

Legend of the Nile consists of 6 reels but it doesn’t have any paylines unlike a lot of other slots. Instead it incorporates cluster pays into the game which means that if you have 4 or more of the same symbols adjacent to each other, then you will receive a payout. This means that it’s a great slot for new gamers as it’s easy to understand how to win money, and is also allows for you to concentrate on the base game without getting distracted by lots of paylines.

Punters can bet as low as 30p or as much as £150 per single spin which means that it caters for most of them. It won’t be hard for anyone to conjure up the minimum required while high-rollers will be happy with the maximum offered. There are also some nice little features that will make your gaming a little easier and they include Max Bet, Double Up and Auto Play. These pretty much explain themselves and will make for a faster, more enjoyable experience while spinning the reels.

So how much money can you win on Legend of the Nile and are the Gods feeling generous? Well, the answer is yes. The maximum win on this slot is 400x your original stake on the base game and of course you will also have the chance to win whatever the progressive jackpot is offering – which at times can be a gargantuan amount. The most lucrative symbol in the base game is the Wild symbol,which is the pyramid with Wild written on it, and it pays 6,000 coins for 20 clustered together. These symbols can also replace all the other symbols in order to increase the value of a cluster.

We have already discussed that Legend of the Nile is a cluster pay game but what happens when there are no more clusters left? Well, you can choose to partake in a double or nothing gamble which is decided on the flip of a coin. As well as this, the Ra symbols will explode and leave spaces on the grid. However, these symbols will then proceed to fill up the Ra Power Bar which acts as the main feature of the game and one which we will discuss now.

You may notice a power bar at the side of the reels which can fill up in three different ways. The first one is through the Ra trail and will fill up every time you receive a Ra symbol. If you manage to fill 8 pieces on the bar then you will be awarded 8 free spins. However, during these spins, you may find more Ra symbols and so the meter will keep on rising. Every time you take a new spin, the Ra Power Bar will empty and you will start again. However, if the bar keeps rising to the very top, you will win the progressive jackpot!

The second way to fill up the meter is through the Anubis Trail and this powers up every time you find an Anubis symbol. If you manage to fully charge the meter then you will get 10 free spins. The symbol will also be upgraded which will result in higher payouts. You may also be given the chance to gain Ra free spins during this feature.

The last way you can fill up the meter is through the Isis Trail and finding the Isis symbols will result in this happening. However, this bar will keep on rising through the base games until you manage to trigger the feature. Once this happens, you will be given 10 free spins and the payout rate of the symbol will rise to 15,000 for 20 or more Isis symbols. Again, the Ra free spins can trigger again during this round which will only enhance your chances of winning money.

It’s always refreshing for a slot to have unique attributes and thankfully Betsoft have managed to create exactly that with the Trails of the Gods feature and also the cluster wins which act as a completely different way of winning compared to the usual paylines. There’s no doubtthat this is the best game on the market of this genre and if you have never had the luxury to explore Egypt, you won’t have to now because the visuals are so stunning it feels like you’re there. Hats off to Betsoft for creating a slot that stands out from the competition. 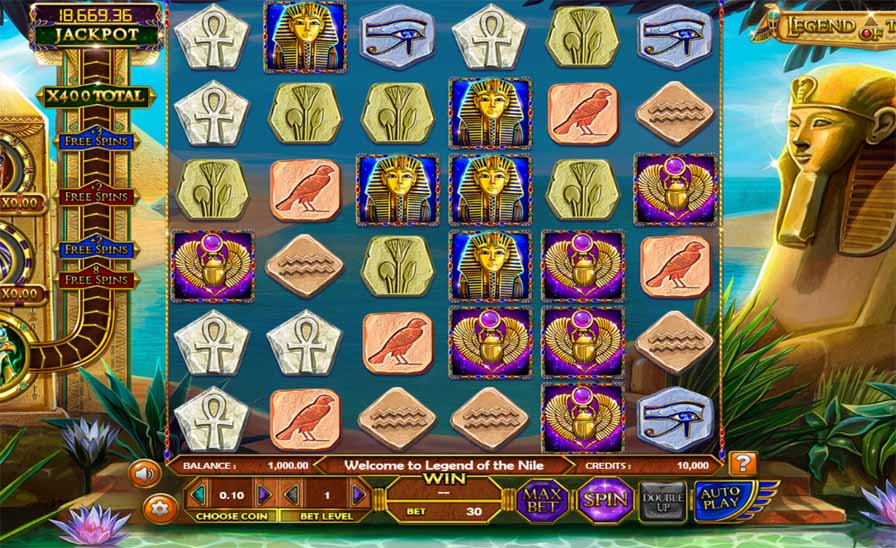 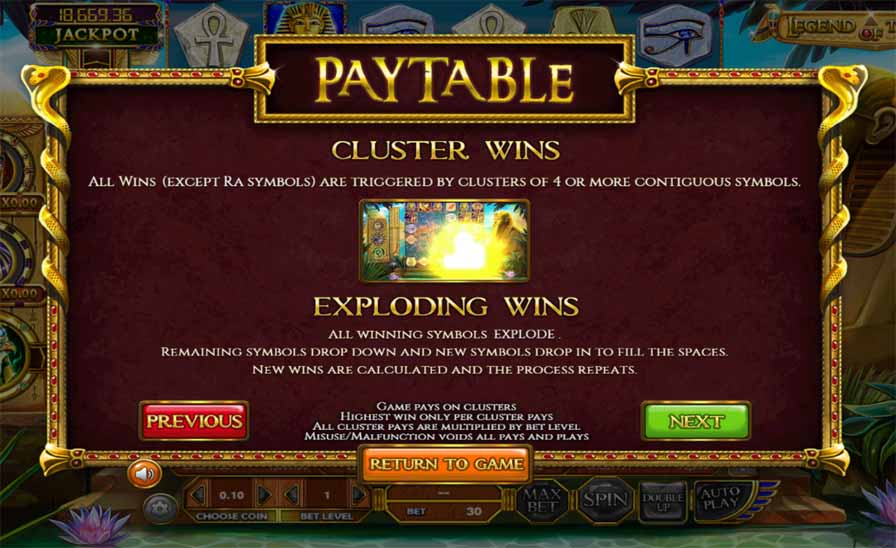