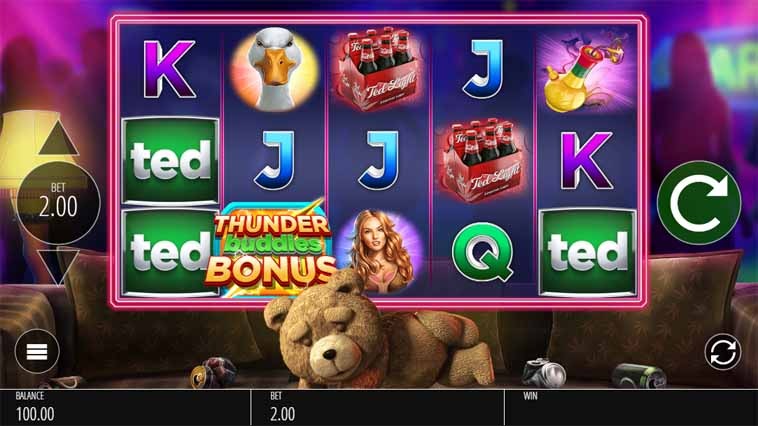 When a movie is successful, it generally spawns a spin-off slot, and this is the case when it comes to Ted – one of the most popular comedies in recent years. You’ll be able to play alongside the famous teddy bear when you spin the reels at this great slot, and experience the same crass humour exhibited throughout the film. What’s more, this is a game that offers more bonuses than you can possibly imagine, making it perfect for those who love the excitement a good bonus round brings.

Ted is a five-reel slot with 20 different paylines. To some, this might seem like a very small number of paylines, but don’t be lulled into thinking that this makes the game boring. In fact, every spin of the reels at this online slot is a fun one! It isn’t possible to alter the amount of paylines you play on each spin, as they are fixed, however you can change the amount you bet. The minimum bet amount at this game is £0.20, while the maximum bet amount is a massive £500 – perfect for those who like to bet big when they play at online casinos.

On the reels, you’ll find a number of familiar symbols (providing you’ve watched the film), including a duck, crates of beer and, of course, Ted himself. Ted, alongside the game’s logo, is the highest paying symbol during the base game, while the duck and Jessica are also high paying symbols. The lowest paying symbols, as is usually the case, are the J-A ones. This slot has an RTP of 95.80%, which is about average in the world of online slots.

It’s also impossible not to mention the graphics at this slot, as they are absolutely fantastic. Ted stands to the side of the reels – or lays asleep underneath them – as you play, and all of the symbols are really well-designed and add to the overall feel of the game. The music isn’t too annoying – unlike at some other slots – and Ted is often heard muttering a few words, which also really adds to the overall enjoyment of this game. This is certainly not a game for those averse to a bit of vulgar humour though!

Get ready for this, as there are a huge number of different bonus features at this slot, and the first is the wild symbol, which is pretty easy to recognise. This symbol can substitute for most of the others on the reels, and can therefore create some nice winning combinations. Remember: it is also the jackpot symbol, along with the Ted logo, which comes stacked on the reels.

There are then six random bonuses, most of which can be activated on any spin of the reels. There’s the Laser Gun Wilds feature, which sees Ted firing a laser at the screen, turning different symbols wild, and then there’s the Psychedelic Super Spin feature, where the reels are covered in smoke, before special Ted symbols are added to the reels, which all then transform into the same symbol. There are two other psychedelic bonuses as well – the Psychedelic Colossal Spin feature and the Psychedelic Bonus Boost feature. The former sees the reels again covered in smoke, before three reels combine to become one huge symbol, while the latter again covers the reels with smoke, before a number of bonus symbols are placed on the reels.

There are two other random features as well, with the first being the Beer Shuffle feature. Ted will spray beer all over the reels, and this will cause the symbols to jumble around and transform into a winning combination. This can happen a few times, until the feature ends. The final random feature to mention is the TV Remote Symbol Streak feature, and this only happens after a winning spin. Ted will start hitting the buttons on the TV remote, which will hold the winning symbols in place, before the other symbols are respun, giving you the chance to get another big win.

That’s not all when it comes to the bonuses though, as there are still a few more to explain. If you manage to get three Thunder Buddies symbols anywhere on the reels, you will start the Thunder Buddies Bonus feature, and this can lead to five different bonus rounds. To determine which of these bonuses you get, you simply have to spin a wheel…

The first one is the Wheel of Fartune Bonus, where you pick from symbols to reveal a multiplier, arrow, boost or spin. A multiplier, boost or arrow will add extra opportunities to win when you play, while spin will see the wheel spin and you getting a prize. Then there’s the Bar Crawl Bonus, which sees you pick from bottles to move around the board, collecting prizes as you go. Land on a special square, and you could receive a bonus – or Ted could end up in jail, which ends the feature.

Next is the S + Mart Free Spins feature, where you are given five free spins. A pattern of wild symbols will appear on the reels on each spin, before shifting before the next free spin. Then there’s the Flash Free Spins feature, which sees you given free spins on a 5×4 set of reels. Above the reels there is a grid, containing extra free spins, extra wilds and cash prizes. After each free spin containing a Flash symbol, you’ll get to have a shot at the grid.

Finally, there’s the Big Money Bonus and, as the name suggests, this is where the large amounts of cash can be won. You can access this feature directly from the initial wheel, or via some of the other bonus games. You’ll be shown a multiplier, and will need to choose whether to accept it, or spin the wheel again. The most that can be won during this feature is a massive 500x your stake.

It should also be noted that you can risk your winnings from the bonus games after they have been played, in the hope of getting a better bonus feature.

Ted is a slot full of fantastic features, and these are complemented by the great graphics and the overall gameplay, which simply couldn’t be more fun. Fans of the movie will absolutely love this online slot from Blueprint Gaming, and even those who have never watched Ted should enjoy spinning the reels when they play. If you do really enjoy playing, you might also like to try South Park Reel Chaos from NetEnt. 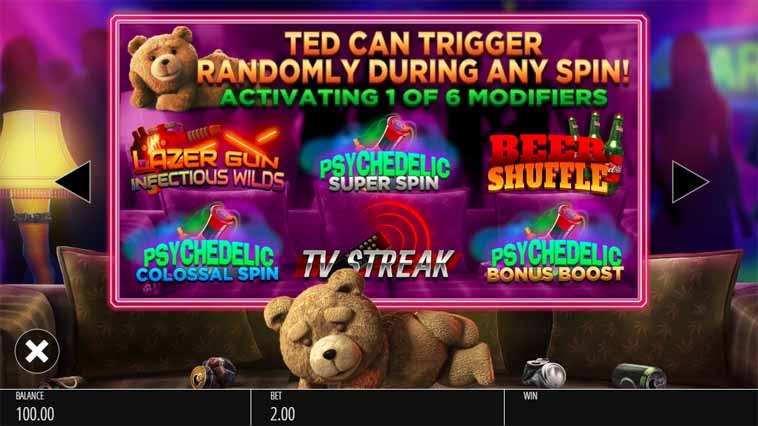 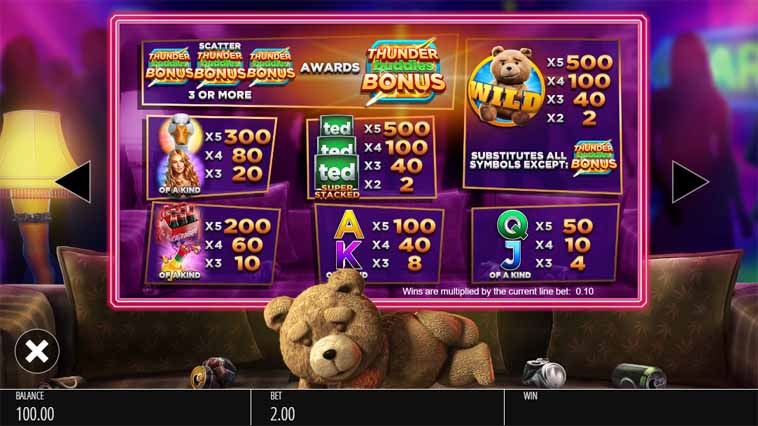