The lifestyles of the rich and the famous is a popular theme amongst slot manufacturers, and occasionally it can get slightly tedious when yet another slot is released featuring the same theme. This means that any slot provider creating a slot with this theme has to do something a bit special to really make it stand out from the crowd, such as offer some good features, nice graphics or exceptional prizes. Luckily for those looking to play Life of Riches by Microgaming, there’s plenty to keep them entertained, meaning that this slot has to be counted as one of the better slots of this theme.

When the game first loads up, you might not be overly impressed by what you see. The reels are on the small side, the graphics don’t match up to some of the other recent slot releases, and the background is pretty plain, to say the least. Looks can be deceiving though, as when you start to play, you’ll discover that this slot is a really fun game to play. What’s more, those players looking to simply win large amounts of money should also be impressed, as the most that can be won at this slot is an impressive 2,400,000 coins, which is far more than the top prizes at most slots, and even eclipses the jackpots at many progressive slots.

Playing Life of Riches isreally easy, especially if you have already played a few other slots before. There are 30 different paylines, and these are fixed, meaning that you have to play all of them every time you spin. You can alter the amount you bet per payline though, meaning that this slot is suitable for low and high stakes players alike. This is a fairly high volatility slot, meaning that wins aren’t as frequent as they are at some other slots, but when a win does spin into view, it is often a decent sized one.

There can be no doubting that Life of Riches is a pretty basic slot, without any overly complicated features or unusual rules. That’s not to say that the features aren’t fun though, and that the gameplay isn’t enjoyable. The main symbol to look out for is the Life of Riches logo, which is not only the wild symbol, but also the jackpot symbol at this game. All of the other symbols are also represented by luxurious items, so expect to see things like private jets, fast cars and casino croupiers spinning around on the reels when you play.

It’s also interesting that this slot has barely any music. You’ll hear a whirring sound as the reels spin around, and a slight jingle if you manage to spin in a win, but other than that there’s complete silence. This will please many, who get tired of the same repetitive tunes playing over and over again at online slots – although some might feel that the lack of audio detracts from their overall slot playing experience.

If it’s bonus features you enjoy, you’ll be glad to know that there are some good ones at Life of Riches – although not as many as you’ll find at some other slots currently out there. The main symbol to look out for throughout the game is the Life of Riches logo, as this is the wild symbol, as well as the jackpot symbol. The fact that it is the wild symbol means that it can substitute for most other symbols on the reels and create some nice winning combinations. What’s more, when it is used to complete a winning combination, the value of that win will be doubled!

Another symbol to look out for is the croupier. It doesn’t lead to any bonus rounds or multipliers, however it is stacked and therefore has a good chance of spinning into view every time you spin the reels. The fact that it is the second highest paying symbol means that seeing croupier symbols on the reels could lead to some really significant prizes.

As mentioned at the beginning of this review, slots about luxurious lifestyles areoften found at online casinos. Life of Riches manages to distance itself from the crowd though as, despite the theme, it still offers some really enjoyable features and easy gameplay. The fact that you could possibly win up to 2,400,000 coins when you play is also clearly something that will appeal to many online slots players. 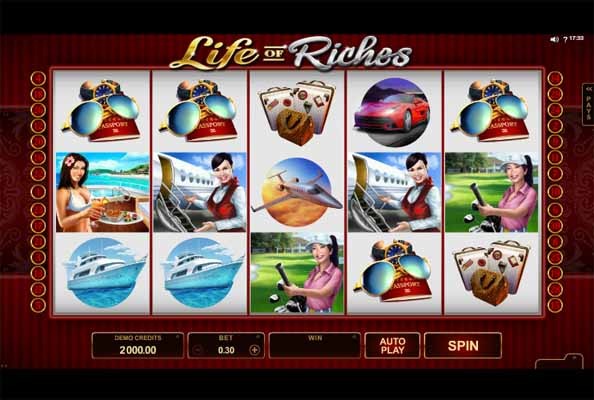 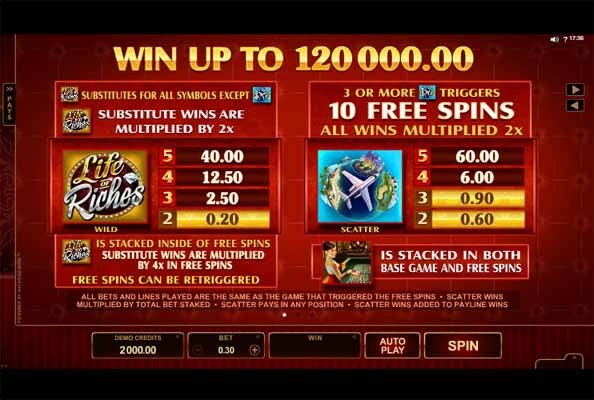