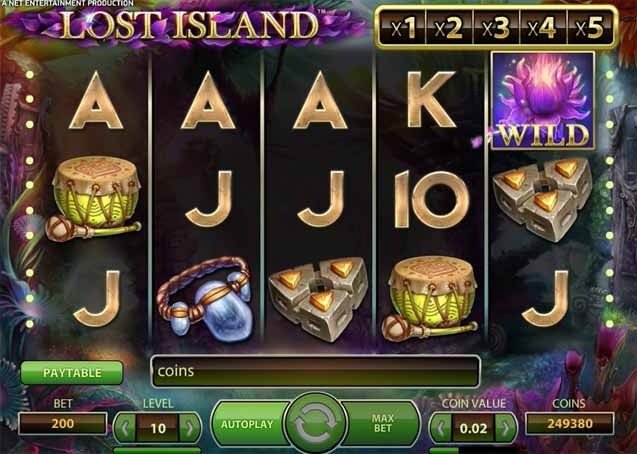 Set on a mysterious piece of land surrounded by water, Lost Island is a unique video slot machine. Players are perplexed by the idea that while half of Lost Island appears perfectly lit, the other half is completely dark. Adding to the ambience is a soundtrack that further contributes to the spookiness of the island.

Throughout the island are stone icons and deep pits. Artifacts play a significant part in the game’s background. When it comes to the reels, they are filled with items typically associated with an abandoned island. The most valuable symbols in the game are five of the island’s long abandoned artifacts. Other symbols include a golden caterpillar, a purple necklace, and a green drum. The most unique symbol in the game is three stones which come together to form a gold triangle.

A glowing lotus, the same purple as the necklace, serves as the wild symbol in the game. A golden tortoise sporting a purple gem as its shell, serves as the game’s scatter symbol.

Players should also take notice of the meter located on the right side of the reels. It holds the five multipliers that help boost players’ winnings. Every time a wild is seen on the reels, it fills one of the five slots for multipliers. That multiplier is then applied to any money a player wins on that spin.

While free spins are being played a wild is added to the reels. It appears on the middle reel in the center of the game screen. This helps players form winning combinations of symbols. Any other wilds that appear on the reels during free spins become stacked wilds. This also makes it easier for players to win money. Any reel that has stacked wilds on it three times in one spin fills three spots on the multiplier meter, helping players win even more money.