Get ready to step into the magical and slightly spooky Magic Shoppe, a fantastic slot produced by the people over at BetSoft. BetSoft have a reputation for producing some of the best-looking slots around, and this is certainly the case when it comes to Magic Shoppe. The 3D graphics and animations really can’t be beaten by any other slots out there, and this great look ensures that every spin of the reels is a really enjoyable one. So, why not find out everything you need to know about this slot, by reading through our comprehensive Magic Shoppe online slot review?

Magic Shoppe is a slot with five reels, and you’ll find 25 different paylines spread across these reels. This isn’t as many paylines as some other online slots can offer, however it is more than enough to keep the excitement levels high when you play. These 25 paylines are fixed, therefore you have to play all of them on every spin. This shouldn’t be a problem though, as it’s always advisable to play as many paylines as you possibly can anyway!

Unlike the paylines, you can change the amount of money you bet per spin at this slot, simply by adjusting the coin value and the bet per payline. As with most BetSoft slots, the minimum bet amount could be slightly too high for lower stakes players, as the least you can bet is £0.50. The maximum bet amount at this slot is £25. It’s important to always play at a stake you’re comfortable with, however you should also remember that higher bets will lead to higher potential prizes.

The thing you’re probably most eager to learn is how much can be won at this slot, and the news is good, as Magic Shoppe offers a huge top prize to the luckiest of players. If you can spin in the correct combination on the reels, you could win a gigantic 513,000 coins from a single spin. The highest paying symbol on the reels is the wild symbol, followed by the skull and the handcuffs. The lowest paying symbols on the reels are the 10-A symbols, as is usually the case at online slots. Even the 10-A symbols can award some really nice prizes though, so don’t be too disappointed if you see them spinning in on the reels!

The next thing to talk about is the bonus features you’ll find at this slot, and there aren’t as many as you’ll find at some other online slots from BetSoft. The ones included in Magic Shoppe have all been designed really well though, and offer you the chance to win some significant amounts of money, so you should be pretty happy when you manage to spin one of them into view! So, keep on reading to learn more about the fantastic bonus features found at Magic Shoppe…

Let’s start with the simplest of all the features first – the wild symbol. Online slots fans will be more than familiar with this handy little symbol, and at Magic Shoppe it is represented by the symbol with “Wild” written on it. It’s a simple wild symbol, without any extra features attached to it, meaning that it will substitute for most other symbols on the reels and help create winning combinations. It’s not a flashy bonus feature, but it’s the one that should come into play most often.

The main feature during this game happens when you manage to get three or more sun boxes or three or more moon boxes on the reels. When this happens, you’ll receive free spins, and these free spins are absolutely fantastic. Why? Because every free spin has a guaranteed win or an additional feature attached to it. The maximum number of free spins you can start with is 12, however you can retrigger more free spins while this feature is active.

The final feature to mention is the Gamble feature, and this can be used after any winning spin. You will be able to choose whether to gamble all your prize, half your prize, or not gamble at all. All you then have to do is pick heads or tails, and pick correctly and you’ll double your prize. Pick incorrectly though and you’ll lose everything you’ve just staked on your gamble. Most experienced gamblers will choose to avoid the Gamble feature, however there’s no harm in using it if you happen to be feeling lucky!

Magic Shoppe is yet another example of why BetSoft have become one of the biggest online slots producers in the world. You can always be sure that any slot released by them will have the highest quality of graphics, and you can also usually be pretty sure that the prizes are going to be significant. The fact that Magic Shoppe has such a different theme ensures that it really stands out from the crowd though, as it’s something a little bit different for online slots fans to enjoy. 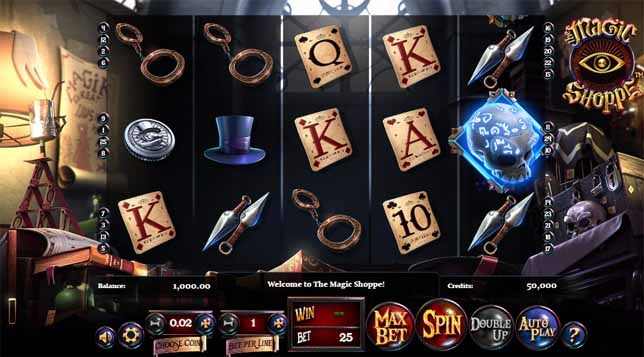 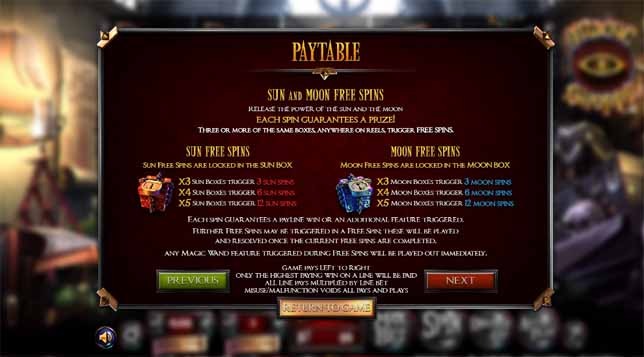