If you’re a fan of Monty Python then you’re going to love the game made by Ash Gaming. Based on the classic 1979 film, this slot manages to recapture the British comedy about a young Jewish man called Brian who was born on the same day next door to Jesus – and mistakenly identified as the lord Christ himself. The film is adapted onto the reels with great effect and even features the famous ‘Always Look on the Bright Side of Life’ song in the background while you’re in with the chance of winning serious cash.

As you load the game for the first time, you will notice famous characters from the original film scattered across the reels – symbols include Pontius Pilate, the Laughing Centurion, Brian’s mum, the Jailer, and Mr Cheeky. The setting is based around the Middle East around 2000 years ago and this is depicted brilliantly throughout the game by the creators Ash Gaming. Even though the soundtrack mentioned above only plays while you spins the reels, this isn’t a problem as it’s quite annoying when songs play repeatedly over again when you’re trying to unwind.

There are five reels and 30 paylines available at the Life of Brian. The paylines cannot be reduced unfortunately – but who would want to drastically reduce their chances of winning anyway? 30 is the perfect amount if you want to be entertained but also not to be confused with different winning combinations.

Players from all levels will be pleased while using this slot as the amount you can bet on a single spin ranges from 0.30p to a massive £300! This is one of the highest maximum bet amounts we have seen on one slot and means the high-rollers will be happy, but the smaller stake players will also be able to have their fun. All stakes are easily controlled by the arrows underneath the bet total and if you do manage to hit the jackpot then you will receive a payout of 1,000 coins.

That brings us nicely onto the prizes you can win on this slot game, and the main section you’ve probably been waiting for! As you may have been able to guess, Brian is the main symbol you need to be looking out for because if he appears on all five reels, then you’re in for a payout of 1000x your original stake! The Life of Brian symbol is the Wild, substituting for all symbols bar the scatter and it also offers a payout of 1000 coins.

The Life of Brian bonus is the main feature of the slot and is triggered by landing the temple symbol on reels 1, 3 and 5. If you manage this, you will be given a wheel to spin to determine your cash prize or multiplier – and to see which of the four main bonus games you will play. The first one is Stoning Bonus where you choose a character to throw a stone and win prizes depending on your choice. If you manage to find a woman, you will win a cash prize and the most you can get is 1000x your stake. Secondly is the People’s Front of Judea Bonus where you pick items such as aqueducts and irrigation to win prizes. Next up is the Romani Eunt Domum Bonus, in which you help Brian spray anti-Roman graffiti on the palace walls – the more you spray, the more prizes you win. The last main bonus is the What’s So Funny feature where the guards must see how long they can last without laughing – it’s up to you to pick the right one to win the prizes on offer.

Other bonuses that can happen during the game include Wild Spaceship respins. This is a bonus that may occur after any losing spin and you will see Brian falling through the sky before being caught by a spaceship. One stack of symbols will then turn wild and you will receive respins and added Wilds until you get a winning combination.

Now and again, you will be surprised to see the Monty Python Foot of God randomly step onto the reels. This will allow you to pick a holy item (sandal, gourd or juniper bush) which will award you with cash prizes. There is also the chance that you may be given a progressive jackpot win, with the total displayed at the top left of the reels.

The last main bonus that will grace the reels is the Always Look on the Bright Side of Life Free Spins. For this feature you will notice crucifixion symbols on reels 3, 4 and 5 which will kick things off. Picking members of the Judean People’s Front Crack Suicide Squad will reward you with free spins until you find one which says ‘Start’. Losing spins will increase the multiplier up to 10x and you can then play the Crucifixion bonus feature where you will have the chance to win extra spins or a cash prize if you collect three symbols.

Ash Gaming have done a wonderful job in transforming such a classic comedy into a highly entertaining slot – and you don’t even have to be a Monty Python fan in order to understand the storyline and characters. There are great bonuses on show, that not only serve great entertainment, but also help to shed light on the film if you haven’t seen it before! So, why not spin the reels today? You’ll certainly be looking on the bright side of life if you manage to spin in the jackpot. 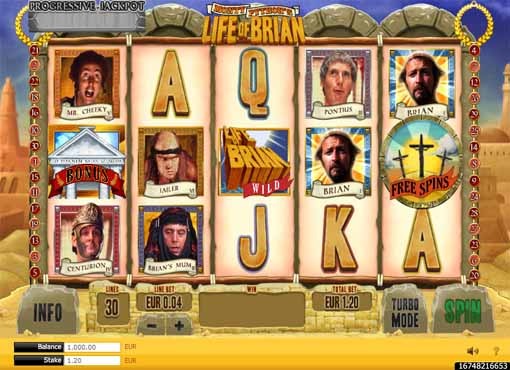 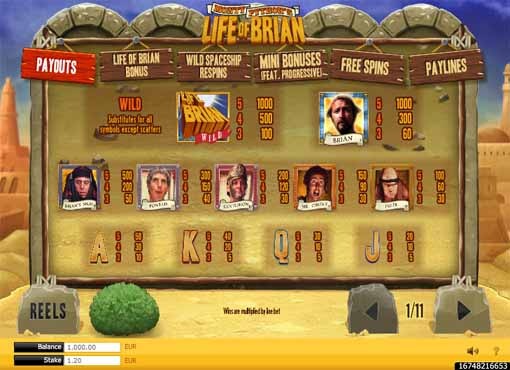