Napoleon & Josephine – which is unsurprisingly based on the it-couple of late 18th-century France – has some serious pedigree behind it. This is a slot that has already proven to be a hit in the land-based casino world, and it’s found at casinos throughout the world. As is the case nowadays, this popularity means that it also deserves a chance to shine online, and this is exactly what WMS have decided to do. The online version of Napoleon & Josephine offers just as much as the land-based version, plus a little more, so why not read our Napoleon & Josephine review to see why you should play this exciting WMS slot?

The first thing to look at is the visuals of this slot, and most will agree that they’re pretty impressive. WMS have added some really detailed symbols to the reels, including Napoleon and Josephine themselves, plus the icons are easy to find and use. There is one criticism though: the generic playing card symbols just seem lazy. Why couldn’t WMS have made some more unique symbols and really made this slot stand out even more? This is only a small complaint though, and doesn’t affect the enjoyment the game offers.

Napoleon & Josephine looks slightly different to most other slots. Why? Well, it has the same number of reels – five – however they are all four symbols high. Most other slots only feature three symbols per reel. Despite having extra symbols, this slot still only manages to offer 50 paylines though – a surprisingly small number, considering other slots offer thousands of paylines to players. The paylines are fixed, so you’ll have to play all of them on every spin.

While you can’t alter the number of paylines, you can change how much you bet per spin though. The minimum bet per spin at Napoleon & Josephine is £0.50, while the maximum bet amount is £100. Divide your bet amount by 50 to work out your bet per payline. Because the minimum bet is £0.50, Napoleon & Josephine probably isn’t a great choice for those looking to play at the lowest stakes.

The last thing to look at in this section is the prizes – probably the most important part of any online slot machine! The most you can win per payline is 750x your bet per payline, and this happens when you get five Napoleon symbols in a row. Other high paying symbols include the Palace of Versailles and the carriage. The big money is won if you manage to activate the free spins bonus feature though, and you can find out about this when you keep reading through this Napoleon & Josephine slot machine review.

It’s fair to say that the bonuses offered at Napoleon & Josephine are pretty basic. While this might put some players off, others will be glad to find a slot that is really simple to play and doesn’t have loads of confusing features. Of course, there are a few bonuses to mention though, and the first is the wild symbol. This is represented by the cannon and it can substitute for all other symbols, aside from Josephine. It’s not the most exciting feature, but it will probably be the one that contributes most towards your prizes.

The Napoleon symbol also needs to be mentioned. This is the slot’s jackpot symbol, however it has another great feature attached to it: you can make combinations of Napoleon symbols from right to left, as well as left to right. This gives you a much better chance of spinning in a really big prize when you play this online slot from WMS. All other symbols only pay left to right though. Napoleon, along with the other high paying symbols, also comes stacked on the reels.

The free spins take place on a second set of reels, which adds some variety to the game. It’s not just the setting that changes though – your chances of winning also go up! This is because you’ll find that the wild symbols are stacked on the reels during the free spins. This leads to the prospect of spinning in a number of high paying wins on a single spin.

Napoleon & Josephine certainly isn’t going to go down as an online classic, despite already reaching that status in the land-based casino world. It’s still a solid offering from the people over at WMS though, with some really nice prizes and some eye-catching graphics. The bonus features are slightly sparse though, meaning that this slot doesn’t have much to make it stand out from the crowd. It’s still definitely worth spinning the reels of this game though, and you can do so at many of our recommended online casinos. If you like this slot, you may also like other hit titles from WMS Gaming including Rome and Egypt and Spartacus Gladiator of Rome. 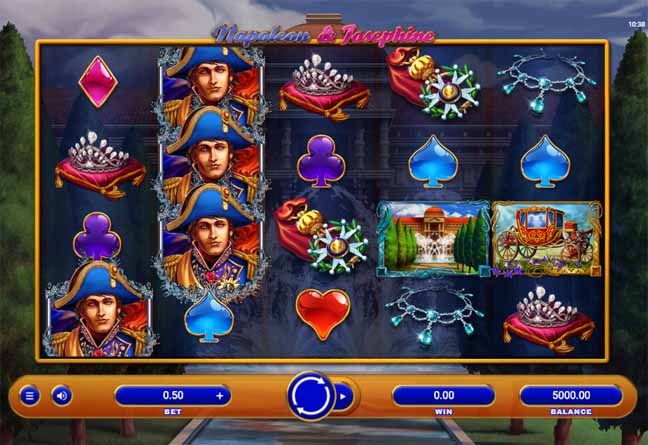 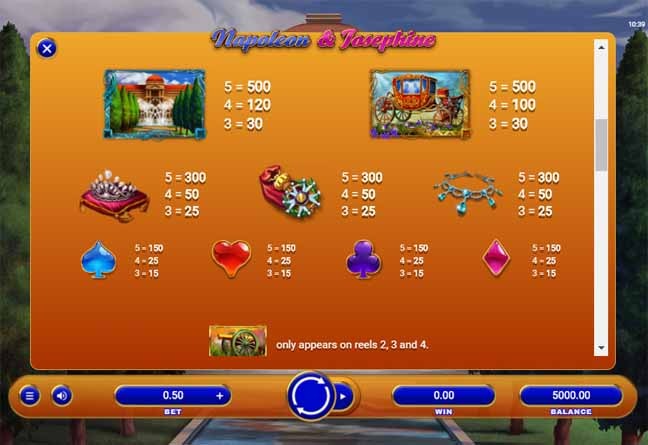