This latest slot instalment from Quickspin focuses on Scandinavia’s Northern Lights and will give you the chance to explore the beautiful views associated with the Arctic sky. Even if you haven’t yet had the chance to tick it off your bucket list in real life, this visually stunning game will make you feel like you’re actually there. You may not be surprised to know that Quickspin are the creators of Northern Sky as they’ve got a reputation for making creative slots, and the fantastic features will be sure to take you on an unforgettable journey. So cancel your holidays this year as this is the only trip you’re going to want to embark on!

Set against the heart of Scandinavia’s snowy mountains, Northern Sky is visually stunning. You won’t be surprised to see the Northern Lights form the backdrop to the reels which glows over a shadowy wintry forest. Symbols on the reels include different coloured crystals and gemstone animals such as bears, owls, wolves and reindeer. You’ll almost be in a state of tranquillity too as you enjoy the game due to a calm, relaxing soundtrack that plays peacefully in the background.

Northern Sky has 5 reels and just 9 paylines that cannot be altered. This isn’t an amount that will impress too many gamblers but Quickspin have followed most software developers these days in not allowing the paylines to be reduced as they know gamers are clever enough to realise it will only damage their chances of winning. One advantage associated with 9 paylines though, is that it will suit gamers who prefer their slots simple and without too many distractions.

Gamers will be able to play Northern Lights from as little as 10p per spin, however you can bet as much as £100 if you wish. This will suit 99% of players as the minimum would be fine for low-stake gamblers, however the maximum may not be enough to satisfy the super high-rollers of the industry. Bet sizes are altered by using the arrows either side of the amount and there is also an Autoplay feature where you can spin up to 1000 times in a row which will enable you to sit back and watch your money roll in!

But how much money can you actually win on Northern Sky? Well, you’ll be thrilled to know that you could book a real trip to see the Northern Lights if you manage to hit the 3,000 coins that are available on every spin! We will discuss how during the Bonus Features section but during the base game you should look out for the reindeer symbol which pays 60x your original stake, the bear which pays 10x, the fox which pays 5x and the owl which pays 4x your stake. All the different coloured crystals will then act as your lower-paid symbols.

Admittedly, Northern Sky isn’t blessed with too many bonus features (2, in total) and a lot of entertainment will come from the base game. The features are quite basic and don’t trigger too often but this isn’t necessarily a bad thing. Some people may not want to be distracted by many different things going on and would prefer to enjoy slots the way they’re supposed to be played!

Gamers who do enjoy the features will be more than happy with the Respin feature which is triggered when you get any winning combination on the base game. The symbols that contribute to the win are locked in place and the other symbols are replaced with more rewarding ones. If you manage to complete or add to a winning combination then those symbols will lock again and you will continue to get spins as long as you keep winning. If you’re lucky, you may be able to fill the screen with one symbol which will give you a big payout!

The other feature that we need to discuss is the Free Games feature which occupies most slot games. This is triggered when you find 3 Scatter symbols which acts as the mountain and has Bonus written across it. When this happens you will be rewarded 10 free spins and these will play with all the lower crystal symbols removed from the game. This leaves you with only the animal symbols to play with which means that you will get bigger prizes. The respins are in play too during the feature which will only enhance your winning chances. This also gives you the opportunity to win over 3,000x your original stake which we touched on earlier.

It appears that Quickspin have managed to create another visually impressive game – and don’t we just love it! Yes, there isn’t as many bonus features as some other slots but the prizes that are on offer more than make up for it. Undoubtedly, you need to be aiming on triggering the Free Spins feature as much as you can because the removal of lower-paid symbols allows for huge money to be won. If you’ve never visited the Northern Lights before then we highly recommend it, but it the mean time Northern Sky seems to be more than a decent substitute. 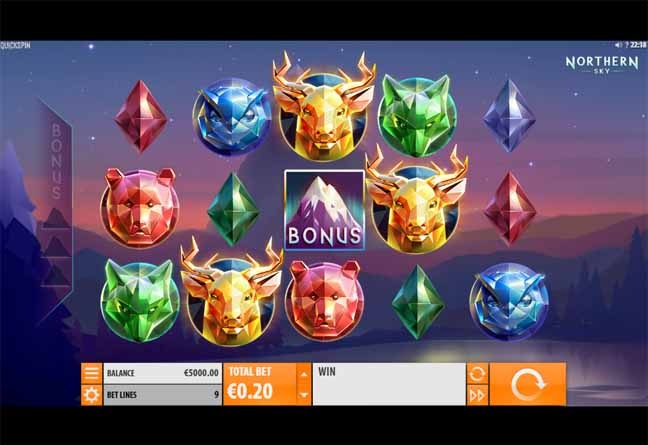 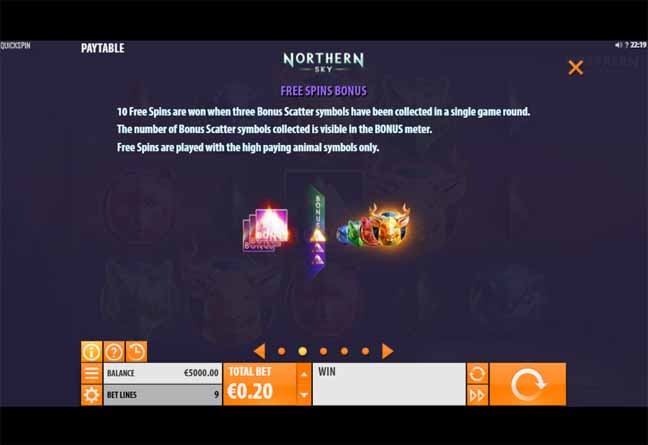