Pawn Stars is an incredibly popular TV series. In case you’ve never seen it, it centres around a pawn shop in Las Vegas, and the guys and girls in the store buy all manner of crazy items, often for absolutely huge sums of money. Don’t worry if Pawn Stars isn’t on TV at the moment though, as Bally Technologies have created a slot based on the show, featuring all of the main characters – as well as a jackpot worth 18,400x your bet.

The design of the game is really nice, with crisp graphics and a number of unique symbols, many of which feature the main characters. There are some generic symbols on the reels though, and it would have been nice if Bally had spent some time making all of the symbols unique. This doesn’t take away from the enjoyment of this slot too much though. While the base game is exciting, the bonuses make this slot great though, and you’ll find more out about them further down the page.

This is a slot with five reels and 40 fixed paylines. The fact that they are fixed means that you won’t be able to alter the amount you use, however you will be able to choose how much to bet per spin. The maximum bet for this slot is an impressive 250 coins, making it great for those with deeper pockets. Once you’ve chosen how much to bet, it’s simply a case of spinning the reels and waiting to see how much you can win, or if you can activate one of the bonus features…

The bonus features are where this slot really excels. Firstly, the wild symbol at this slot is the Pawn Stars logo, meaning that it can substitute for most other symbols to create winning combinations. It appears on reels two, three and four, and can come stacked on all of them.

The first bonus feature is activated when three ring symbols are spun in anywhere on reels one, three and five. When you do this, you’ll get 10 free spins, and while active, all wins are doubled. It’s a pretty basic bonus round, but one that can lead to some nice sized wins.

Getting three or more of the Pawn Bonus symbols anywhere on reels two, three and four will lead to a simple Pick Me game. You’ll pick one of six items, and will then reveal a multiplier of between 200x and 3000x your stake. If you don’t like the offer, you can choose to pick a different symbol, however you’ll have to take the second prize offered.

The final feature is the Negotiation Feature. One of the stars from the show will appear on screen and negotiate over a price. You’ll need to make an offer, and the pawnbroker will then either accept the offer, or negotiate. Eventually, you’ll agreeon an amount, and will win a cash prize.

Pawn Stars is a really fun online slot, mainly thanks to the bonus games on offer. It’s not only fans of the TV show who should like this slot, as it has the excitement needed to appeal to absolutely everyone. 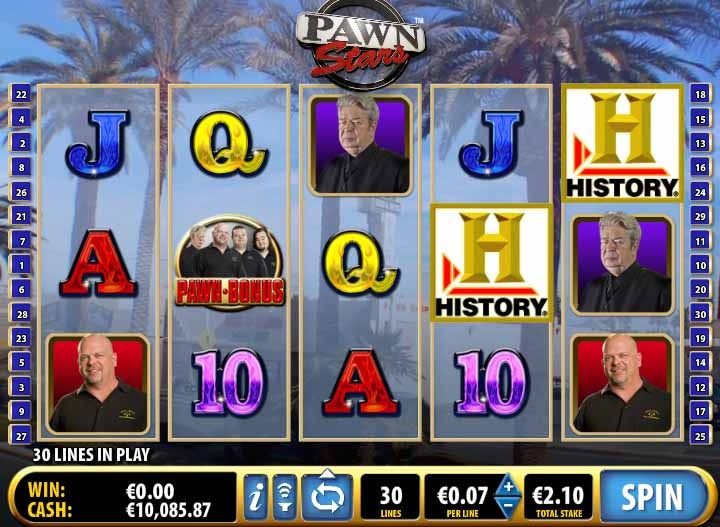