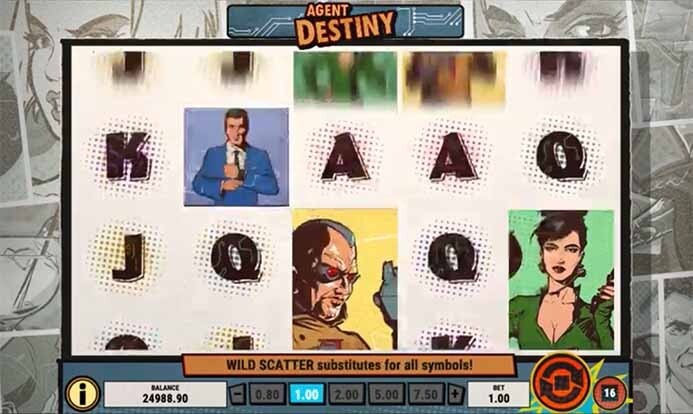 As the name denotes, Agent Destiny is the spy-themed 5 reels, and 20 paylines slot from iGaming giant Play’n GO. The slot was released on September 9, 2014, with a promising RTP rate of 96.26%. It offers free spins and showcases its high volatility. Meaning, it generates winnings less often, but when it does, it pays out big amounts. And, the highest win that you can receive from this video slot machine is 500,000 coins.

Agent Destiny is also available for mobile phones, which are equipped with Windows, Android, and iOS operating systems. The betting limit ranges from 0.10 to 100.00.

Agent Destiny is a spy-themed slot by Play’n GO, and the software developer has brought an exciting measure of amusement by creating the slot in comics style. Besides, speedy music perfectly enhances the thematic essence of the slot.

High paying symbols are a blonde hair lady, a scientist, the agent, and a black-haired lady. When the same symbols come for 5 times within a single spin, you will receive 30, 24, 15, and 12 coins, respectively.

Mega Symbols
All character symbols, including the SafeWild, can appear on your reels as Mega symbols. Different sized, but the same type of symbols creates wins on payline.

Free Spins
If 3 WildScatter symbols arrive on your reel 1, 3, and 5, the free spins feature will be triggered. Then you will receive 9 spins.

In the base game, the Linked Reels feature provides a single free spin. Linked Reels that are on the right side goes to the left for occupying the first reel. And, when the Free Spins are going on, similar symbols arrive at the rightmost reel and goes towards the leftmost on every consecutive free spin.