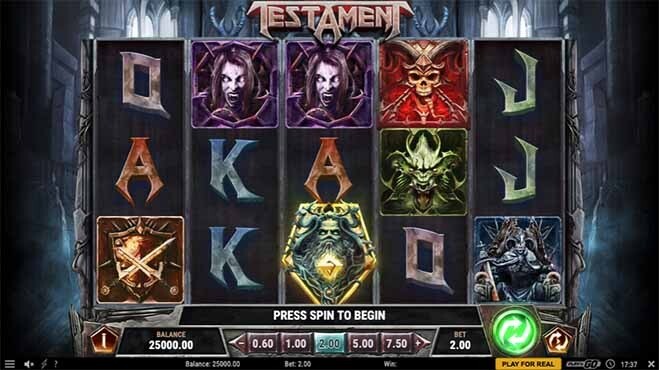 Music themed slot machines have become popular in recent years. Many of them are released online, including Testament. The game is based on the thrash metal band that gives it its name. More specifically, it references Dark Roots of Earth, an album the group released in 2012.

The graphics, symbols and soundtrack were all inspired by the group. The soundtrack features some of Testament’s biggest hits, including the song the 2012 album was based off of, as well as Cold Embrace. Throne of Thorns is also on the soundtrack, and serves as the inspiration for one of the game’s bonuses.

When players first launch the game they will see a goth style background. The symbols used on the reels represent vampires, shields, werewolves, skulls, and skeletons. Players should keep an eye out for the skull, as it has the ability to become a wild symbol at times.

In keeping with the dark theme of the game, its regular wild symbol is a thrash metal demon. Not to be outdone, the scatter symbol is a Gorgon with hair made of snakes.

The game’s bonus features give players a glimmer of excitement within a very darkly themed slot. While most slots don’t trigger a bonus unless three scatters land on the reels, Testament has a bonus built in that is activated with two scatters on the reels at once. This is the Song Feature, boasting three free spins for players. Sticky wilds are added to the reels for the duration of the feature.

There are also certain modifiers that may be applied to the bonus. Players will get the modifier that the game randomly chooses. The three possibilities are Dark Roots of Earth, Throne of Thorns, and Cold Embrace.

The Dark Roots of Earth modifier adds gold wild symbols to the reels. Those symbols then expand above the original symbol or below it. The Throne of Thorns modifier adds extra chances to win by expanding the capacity of the reels, which makes winning combinations more likely. The Cold Embrace modifier takes wilds and turns them into sticky symbols for the duration of the bonus spins.

There is also a standard free spins bonus that players must get three of the scatter symbol in order to trigger. Those lucky enough to get four or five scatters on the reels at once get an extra cash prize.

When it come to getting three scatters, players get nine spins for free. There are nine tiles above the reels that remain locked until the free spins are activated. While these free spins are being played the wilds expand the same way they do with the Dark Roots of Earth modifier.