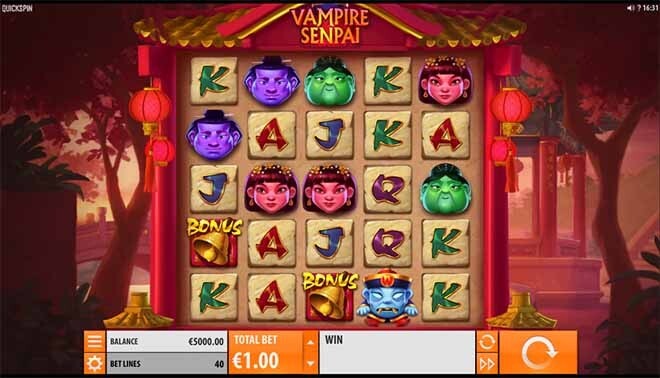 The subject of the Vampire Senpai online slot is the folklore of East Asia. This is slightly different than most of the other forklore based slot games on the market today. Vampire Senpai appeals to players’ dark sides but also has a humorous, lighthearted element to it.

This game is set in a picturesque Japanese garden. The background colors include soft pinks and oranges. Above the reels players will see a pagoda roof, surrounded by a bridge, lanterns rocking in the breeze, and trees. During regular gameplay, the sun is going down in the Japanese town the game takes place in. But when a bonus game is triggered the sky turns completely dark, indicating time has passed.

The Vampire Wild must bite one of the human wilds in order for it to become a turned wild. They will continue to bite until all the human wilds have been removed from the reels.

The Talisman and Vampire wilds have one more thing in common. When they appear on the reels during free spins, players get an extra spin for each instance of either symbol.