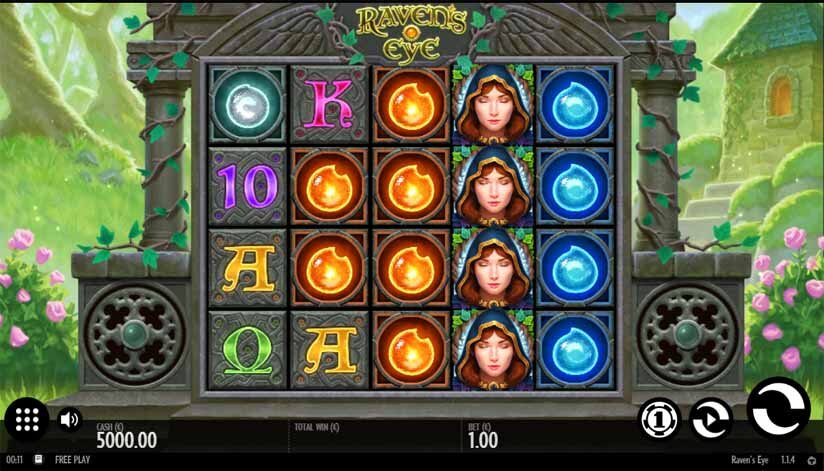 The fantasy world of a traditional Norse fairy tale is the chosen theme for Ravens Eye. With a dash of mystery thrown in, this multifaceted video slot is sure to entertain.

The background that players see beyond the reels is a relaxing, calm garden complete with a shed and some beautiful pink flowers. The reels themselves are set in stone and surrounded by a temple portico.

The main symbols on the reels are round symbols that appear to resemble bowling balls. Those symbols represent air, nature, water, earth, and fire. However, the two symbols in the game that pay the most are the gold “W” wild symbol and a female druid. A raven serves as the game’s scatter symbol.

During regular gameplay, the raven is a mystery symbol. Once it appears on the reels it will morph into one of the other symbols in the game. It may even turn into a wild at times.

Three raven symbols on the reels at once triggers free spins. The number of ravens on the reels determines the number of spins players get for free. At most they can get 20 free spins. While they are being played Raven Orbs are collected. There is a meter to the side of the reels where the Raven Orbs symbols are stored. Once the meter has reached full capacity the symbol will go on to overtake any spots where the Raven was on the reels. It will remain in place while players are finishing the bonus round, which also includes three more free spins. A mystery symbol then appears in each one of them. 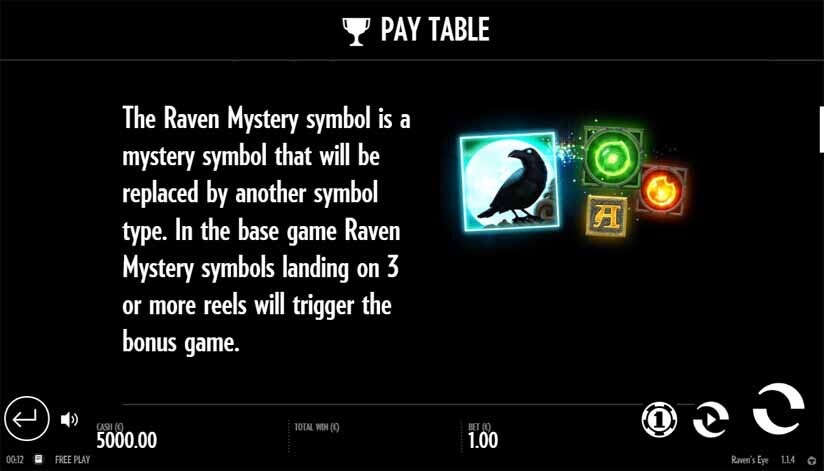 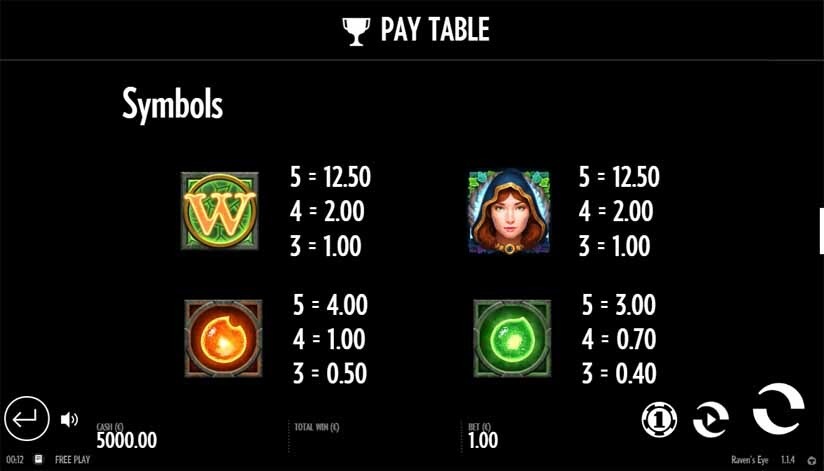 Raven’s Eye is not the most original slot machine game of today. It takes many elements from past games by the same manufacturer. While this could help attract players, it may also hurt the game’s popularity.

Those who have played other Thunderkick games will notice The game’s distinct mystery symbol should look familiar to those used in Dragon Horn, and Flame Busters.

The multiple levels of the bonus round were taken directly from Pink Elephant. For players familiar with both games, it may feel like they are too much alike.

Most players are looking for variables in the games they have to choose from. When several games use seemingly the same features and/or graphics, players can quickly grow bored.
That’s not to say that Raven’s Eye doesn’t have its fans. The game still has something to offer in terms of bonuses. This may be its biggest selling point, but it’s the only one some players need.