With a built in audience of fans, the Resident Evil 6 online video slot was sure to be a hit. It even includes highlights of the video game characters when players launch the slot. This helps explain its bonus features.

On the reels those who play the video game will recognize the characters used as symbols. Jake, Ada, Leon, and Chris are all animated symbols that become stacked once they land on the reels. Each character is armed with their own weapon. These weapons, as well as ammunition are also symbols on the reels. A spatter of blood is the wild symbol while the scatter symbol is a flower pot with a green plant living in it. The scatter symbol will only ever appear on the third, fourth and fifth reels, and when it becomes an expanding scatter, it will only be seen on reel three.

Getting the expanding scatter on the third reel triggers the re-spins bonus. Players will get three re-spins for free. If during these re-spins, a scatter lands on the reels again, players get three more of those re-spins. During the re-spins players want to look out for the zombie hunter symbol that becomes stacked to cover two additional reels.

Each character in the game has their own bonus mission. Most players hope for Ada’s mission because there are four levels to her bonus. Players are shown a panel measuring 4×3. They are tasked with helping Ada figure out its entry code. Players then click on the various picks, and they get six chances. If they uncover the three green lights they can play level two of the bonus.Those green lights may come with multipliers during the first round of the mission. Every time a player levels up, the value of the multipliers increases.

Players who look forward to free spins will enjoy the other three bonuses offered. All free spins come with a wild modifier. Chris brings expanding reels, while Jake randomly places wilds on them. Leon can change any wild symbol into a sticky wild, which can help increase players chances of winning money.

Every time a free spin takes place, Chris drops down onto the reels to deliver his bonus. Jake goes up against the monster to deliver his, and Leon shoots at the zombies. 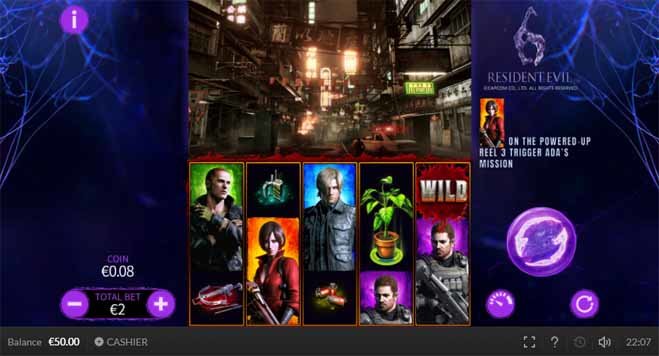 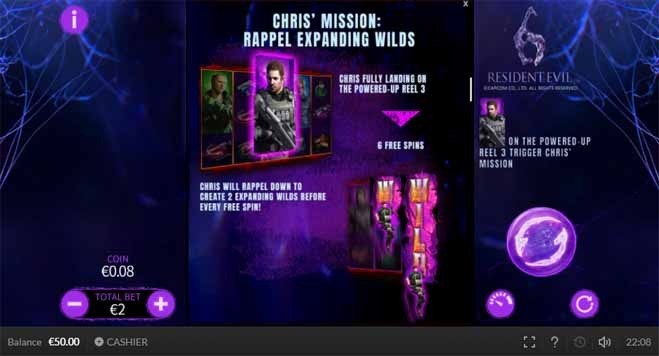 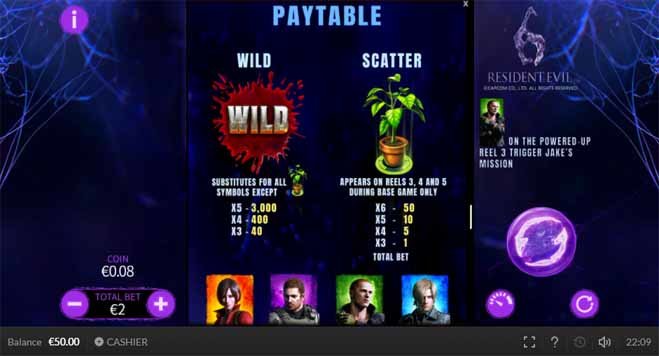 The Resident Evil 6 slot has enough excitement to offer to attract players who aren’t familiar with the video game. The four bonus missions make this game more interactive than many other slots.