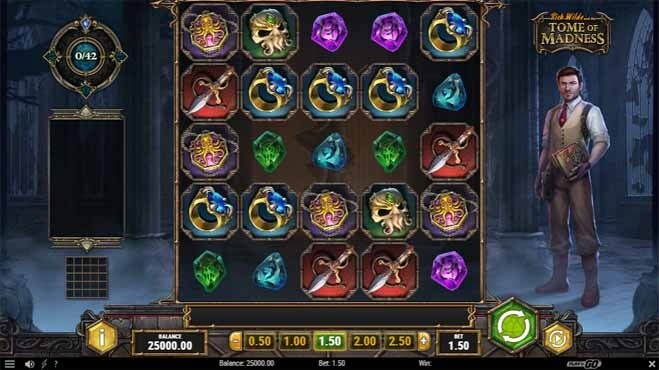 The dark side of slot machine games can clearly be seen in Rich Wilde and the Tome of Madness. This online slot machine game is designed to appeal to those who appreciate the creepiness and horror in this world.

The movie quality of the graphics used in the game draws players’ eyes in immediately. A video introduction launches the game and introduces players to its theme/story. The video shows a line from “The Call of Cthulhu,” by H.P. Lovecraft.

This leads to a game that boasts some impressive 3D graphics. Rich Wilde, the character the game is based on, is an explorer and archaeologist. He is tasked with figuring out whatever secrets the Cult of Cthulhu has to hide.

In the background, players will see a dungeon and an angel’s statue. The reels are lined with symbols that include gemstones in four different colors. It also includes the Rich Wilde character, daggers, rings, octopus pendants, eye marks, and skulls.

One of the extra features in this game is the portal. This gets added to whenever a winning combination of symbols is achieved. When the portal becomes fully charged, players unlock one of the bonus features.

The number of symbols it takes to fill the portal determines which bonus players get. Seven symbols get them two special wilds on the reels. These two wilds replace two standard symbols. If players get 14 symbols to power the portal, and those symbols form a winning combination, the Abyss effect is triggered.

When this happens, any special wilds on the reels are removed. Those symbols then go into the portal to help it fully charge again.

The best case scenario for the portal is that players will get 27 symbols, which triggers the void effect. It causes the game to select one specific symbol. However many of that symbol are on the reels get moved to the portal, once again helping it to charge.

Rich Wilde and the Tome of Madness Slot Info

Rich Wilde and the Tome of Madness Screenshots 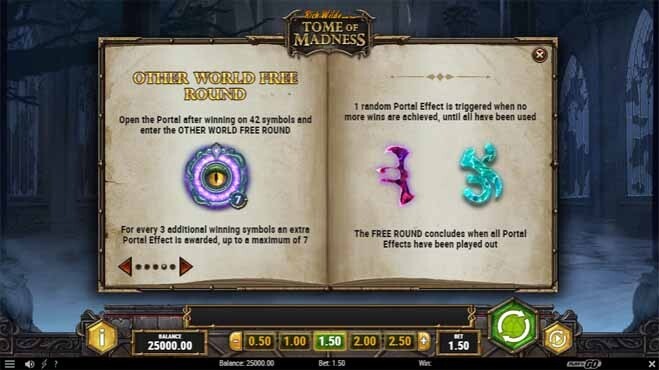 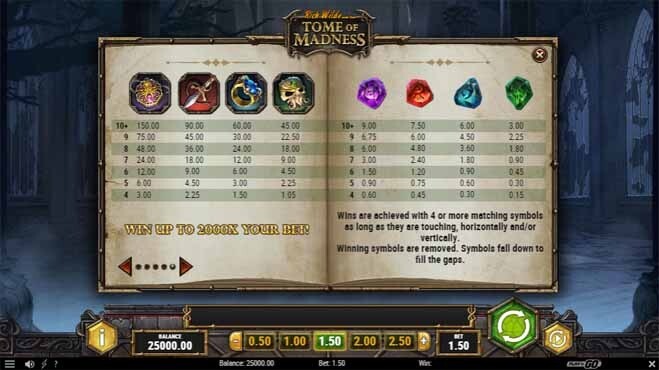 However, the peak of the game is reached when 42 winning symbols are on the reels. This unlocks a gate to another dimension, which has its own bonus round. It is referred to as the Other World and has three separate portal effects. Any group of three symbols in excess of the original 42 adds more effects to the portal. In total, it can has as many as seven special effects at once. At this point in the game, cascading reels are activated. This means that as long as winning combinations are being formed, players will keep getting new symbols dropped on the reels, without having to spin them.

Mega Wild is the final bonus feature. It includes eye marks and with enough on the reels, those eyes are opened. When they are the Mega Wild symbol appears and helps creating many winning combinations.