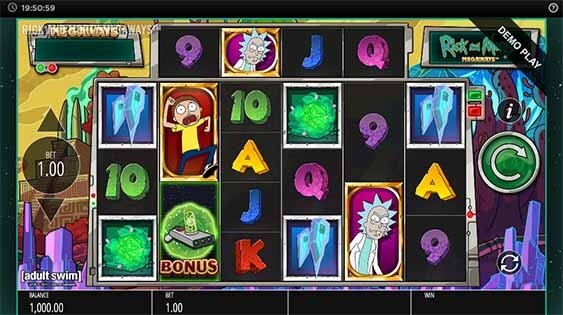 One of the most popular shows on Cartoon Network’s Adult Swim is Rick And Morty. To keep its fans entertained even when the show isn’t on, the Rick and Morty Megaways online slot was created. For those who haven’t seen the show, it follows the lives of a scientist named Rick, and the trouble he gets into with Morty, his beloved grandson.

Most of the symbols on the reels will be recognized by fans of the show. They include Rick and Morty, as well as a pair of shards, and paradise eggs. There is also a bonus symbol that serves as the scatter, and some mystery symbols.

When players get at least four of the bonus scatter on the reels they can choose which free spins feature they want to play. Their choices are Pickle Rick, Federation Wild, Vindicator, and Mystery.

With Pickle Rick free spins, players get a multiplier. Cascading reels are used in free spins and for each one that occurs, the multiplier is worth more and more.

In Federation Wild, a bonus reel is added to the game screen and highlights certain positions. One symbol is highlighted and any instances of the same symbol under the highlighted positions results in the symbol becoming a highlighted wild, as well as the reel it is on. A multiplier mat even be added to these symbols. There is a special scatter symbol only seen in this feature. Three instances of this scatter on the reels during the bonus triggers more free spins.