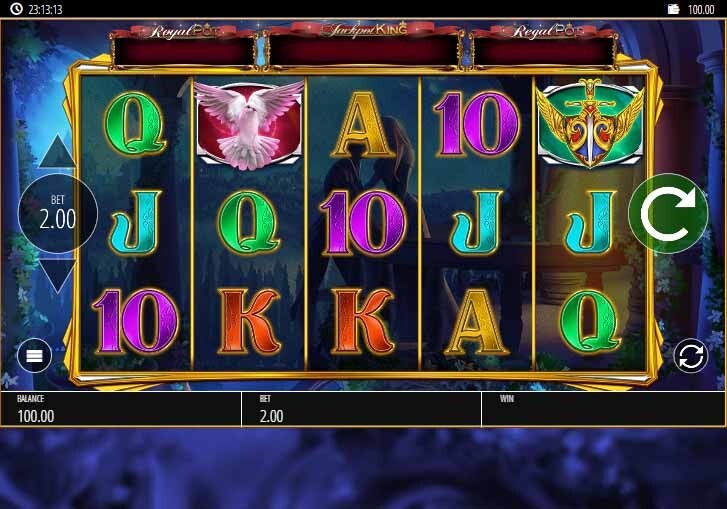 Inspired by the Shakespearean play of the same name, Romeo & Juliet is an online video slot for true romantics. The game features the star crossed lovers and other figures from the story.

Not surprisingly, the game’s background screen depicts the balcony from the play’s most famous scene. The reels are filled with objects associated with romance. This includes a heart, doves, a rose and a crest. Romeo & Juliet themselves also serve as a symbol. Juliet and Romeo both act as a standard and wild symbol in the game. A poison bottle serves as the bonus symbol.

The bonus features in Romeo & Juliet are unlike any other. One of them is the Lover’s Super Spin. It features the two lovebirds; Juliet stares intently at a handsome Romeo. The Lover’s Super Spin is a random bonus that occurs during regular gameplay. When it does, players see three hearts. These hearts will trigger one of the five bonus features included. One of them is the extra Juliet wild symbols. Others include a multiplier that doubles players’ winnings and Romeo wild symbols as well. The Romeo wild symbols put extras on the reels for the next spin a player makes. A free re-spin of the wheels is also possible.

When players get the bonus symbol on the reels it triggers one of the three features. A bonus symbol on the first, third and fifth reels simultaneously, lead to the playing of one of them. Players can choose the side game for Romeo or the one for Juliet. The Romeo bonus feature gives players a chance to click on objects that will reveal their prizes. The Juliet bonus feature gives players a shot at spinning a bonus wheel. The wheel’s prizes include multipliers that significantly increase a player’s winnings.

If players get a Lover’s Winspin, the game’s most valuable symbols are added to the reels for one spin only. Players are guaranteed to win money from that spin. In a five-of-a-kind scenario, the spin of the reels always includes a symbol that helps players win money. 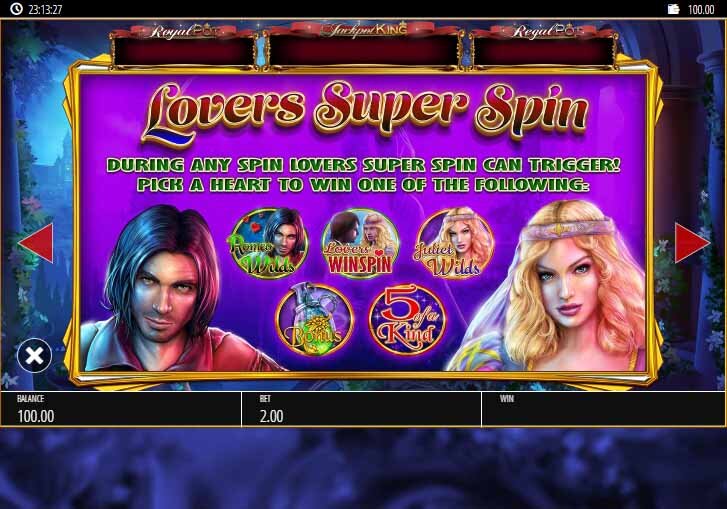 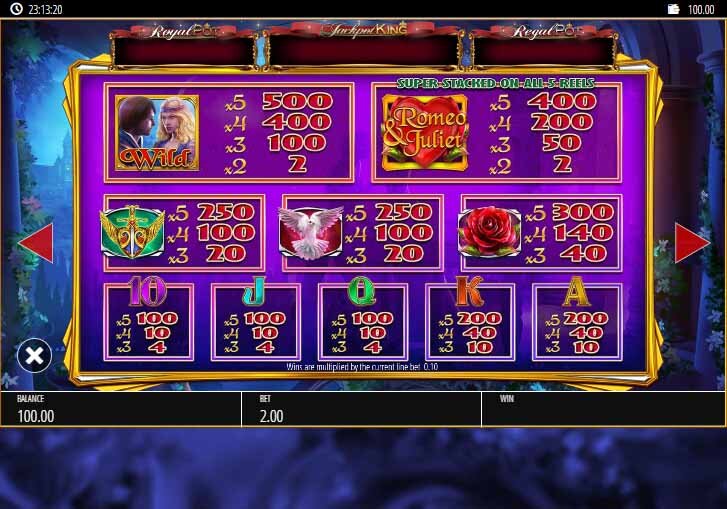 Players can also enjoy the game’s free spins round. Referred to as Star Crossed Lovers Free Spins two sets of reels are feature. One is Romeo’s reel and one is Juliet’s. Both reel sets boast transferring wilds. Love hearts are used as those wild symbols. For example, if Juliet’s reels get the love hearts symbol, Romeo’s will too. This doubles the number of free spins players get from five to 10.

The last bonus feature of Romeo & Juliet is its Jackpot King Pot. This includes a trio of progressive jackpots to be won. Real money players may find the jackpot randomly triggered. Players can get a huge cash prize or a shot at the Wheel King Bonus. While the Jackpot King Pot is a standard prize pool, the Wheel King Bonus is where players can win a progressive jackpot. This makes the game extremely compelling.