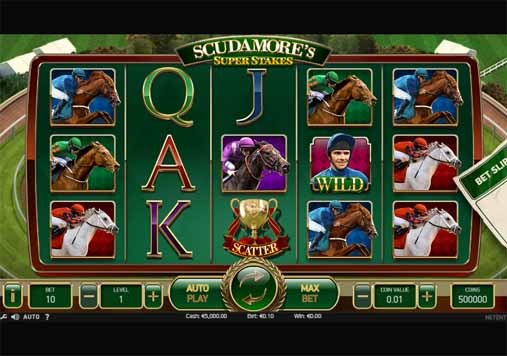 For players that love slots and horse betting, Scudamore’s Super Stakes gives them the best of both worlds. The game is named for Peter Scudamore, a celebrity in the horse racing industry.

In the background of the game, players will see a racetrack. Beyond the greens of the track are Scudamore and his fellow jockeys. They preside over the reel during gameplay. Instead of hearing the typical slot machine sound, effects players will hear the sounds of a horserace. Action on the reels is accompanied by classical music playing in the background.

The colors of the game are evident in the symbols on the reels. They play an interactive part in the game. The lower valued symbols in the game are the typical numbers found in slot machines. Every number symbol is red, green, blue or purple. There are also jockeys on the reels, each dressed in one of these colors. Scudamore is the wild symbol in the game. A gold trophy cup serves as the scatter symbol.

Super Stakes is a game with several bonus features. One of them is the bet slip. Players must spend additional money for this bonus. To the right of the reels lies the slip. Clicking on the slip takes players to a different game screen. On that screen a player can decide what their bet will be. The bet makes players guess the number of times the symbol of their choice will land on the reels within a certain number of spins. During play, the potential winnings for this bet are shown on the slip. The potential winnings are based on the bet a player places. If a player made a good bet, they get their money as soon as they accumulate the proper number of appearances of a symbol.

The appearance of at least three scatter symbols on the reels triggers free spins. When this happens, players are shown a different game screen. It features four jockeys with their horses. Every horse includes a multiplier used to increase players’ winnings. Players must then choose one of the horses to win a race. The screen showing the race will appear above the reels. If a jockey’s color symbol lands on the reels they advance. This continues until one horse wins the race, which ends the free spins bonus.

The game also boasts a random wild feature. While this is never triggered during free spins, it can happen anytime during standard gameplay. When the wild feature occurs, at least two horseshoe symbols take their place on the reels. They land on top of other symbols, which then transform into wilds. In general, for every 40 to 50 spins of the reels this feature will be activated. 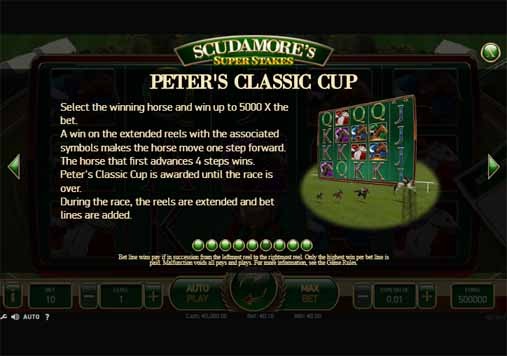 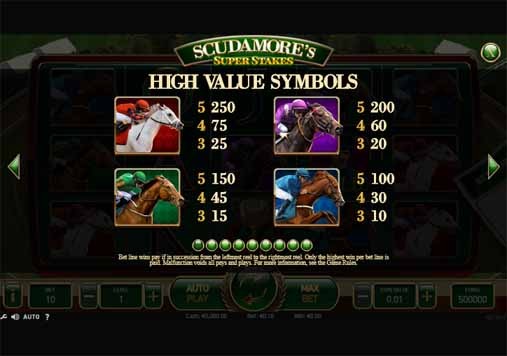 Even for slot players who don’t necessarily enjoy horseracing, this game has something to offer. Its interactive features and extra bonus make it a popular choice among players. This game appeals experienced players as well as beginners.