Upon first glance, you’d be forgiven in thinking Second Strike is your average, colourful fruit slot that has graced our screens for so many years. However, as you look a little bit closer, it’s obvious that Quickspin have created a game that’s manages to add volatility into the mix. This retro-themed game offers refreshingly unique simplicity and the main reason why this is a success is down to the Second Strike feature which we will discuss later on. Sound intriguing? Well take a read of our detailed review and you’ll see exactly what all the fuss is about!

When you load Second Strike up for the first time, you’ll notice a simple, colourful background that takes the form of a classic fruit slot. Purple and red horizontal stripes make up the backdrop to the reels and – like most retro games – it is not burdened by complicated colours and graphics. It may not look very original on first sight but it is definitely eye catching and you’ll be aware of a jazzy soundtrack that plays while you spin the reels. Symbols that will win you prizes include plums, cherries, melons, grapes, bells, stars, lucky 7s and diamonds.

Second Strike consists of 5 reels and 10 paylines that cannot be altered. Admittedly, this isn’t an amount that will impress too many gamblers but it gives you the chance to enjoy the game for what it is instead of getting caught up with one that has many different ways to win. Most software developers have stopped giving players the chance to lower paylines too because why would you want to reduce them and lower your chances of winning?

Players can bet from as little as £0.10p and as much as £100 per spin which will cater for 99% of players. Low-stake gamers won’t have to dig very deep in order to find the minimum required while high-rollers will be happy with the maximum amount offered. The total bet can be altered by using the up and down arrows to the right of the amount and there’s even an Auto Play option in which you can sit back, relax and watch your money roll in.

That brings us nicely onto how much you can actually win on Second Strike. You need to be looking out for the diamonds which will win you 1,000 coins if you land 5 on a payline. Other lucrative symbols include the 7s which will get you 200 coins for 5 on a payline, the star which will get you 150 and the bell which will win you 100. All the other symbols will result in a payout lower than 100 coins but are still much better than a kick in the teeth. However, it’s worth noting that the maximum you can win on this game is an incredible 25,000 coins so it’s definitely well worth your time and we’ll explain how to do it below.

Now it’s time to talk about the bonus features on offer at Second Strike. Try keeping your eyes peeled for the Wild symbols which are represented by a golden Wild and substitutes all other symbols – enabling for a bigger payout. Now, if you’re expecting this game to have tons of bonus features, you’re going to be disappointed as there is only one main feature and no scatter symbols available, but that really is not a problem and now we’re going to tell you why.

Even though Second Strike may not look all that on first impressions, the original feature game more than makes up for it. It’s a simple idea that no other software developers have thought of before but it works incredibly well. With a possible maximum payout of 25,000 coins too then it’s no wonder why it’s in Quickspin’s top 5 popular games of all time. If you’re a fan of fruit games with a volatile twist then we suggest you don’t waste any time in playing Second Strike. Even if you don’t manage to win big money, it’s still a great form of entertainment. 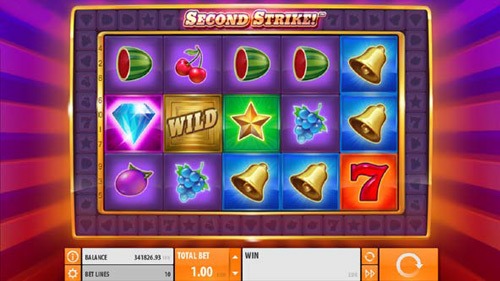 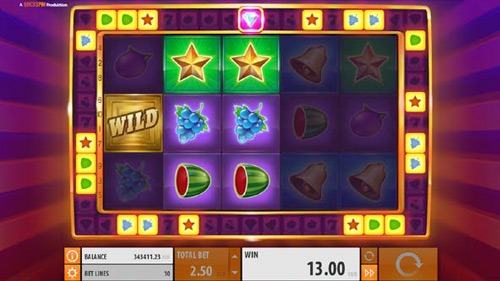